Porous liquids acting as membranes: This process could save enormous amounts of energy and thus CO2 in the plastics industry. (Photo: A. Knebel, KIT)

Jointly with cooperation partners, a researcher of Karlsruhe Institute of Technology (KIT) has developed “porous liquids”: Nanoparticles, that are able to separate gas molecules of different sizes from each other, float – finely distributed – in a solvent. This is because the particles have empty pores, through whose openings only molecules of a certain size can penetrate. These porous liquids may be used directly or processed into membranes that efficiently separate propene from gaseous mixtures. Propen, in turn, is employed as the starting material for propylene, a widely used plastic material. This could replace the energy-intensive distillation that has been the common procedure up to now. The team reports on the results in Nature Materials. (DOI: 10.1038/s41563-020-0764-y).

Propene, also known as propylene, is one of the most important raw materials for the chemical industry, of which around 100 million tons are used up worldwide every year. Polypropylene, a real “mass plastic”, produced from propene is mainly used for packaging, but also in industries such as construction and automotive. Propene is mainly obtained by processing crude oil or natural gas. In this process, it is separated from other gases by distillation and then purified. “In the technical literature, it is assumed that gas separation in petrochemistry using membranes would only cost one fifth of the energy required for distillation. In view of the required high quantities of propene, this means that the release of huge amounts of the greenhouse gas CO2 can be avoided”, says Junior Research Group Leader Dr. Alexander Knebel from the KIT Institute of Functional Interfaces who conducted research at Leibniz Universität Hannover and in Saudi Arabia until 2019.

The chemist is a major contributor to a research project that, for the first time, raises interest in the petrochemical industry as regards the use of membranes for the separation of propene. Knebel's cooperation partners were scientists from Leibniz Universität Hannover, King Abdullah University of Science and Technology and the Deutsches Institut für Kautschuktechnologie.

Metal-organic framework distributed in a liquid for the first time

The researchers started their work with the solid material ZIF-67 (zeolitic imidazole framework) whose atoms form a metal-organic framework with 0.34 nanometer-wide pore openings. In doing so, they systematically modified the surface of ZIF-67 nanoparticles. “This enabled us to finely disperse a metal-organic framework in liquids such as cyclohexane, cyclooctane or mesitylene,” says Knebel joyfully. Scientists call the resulting dispersion “porous liquid”. 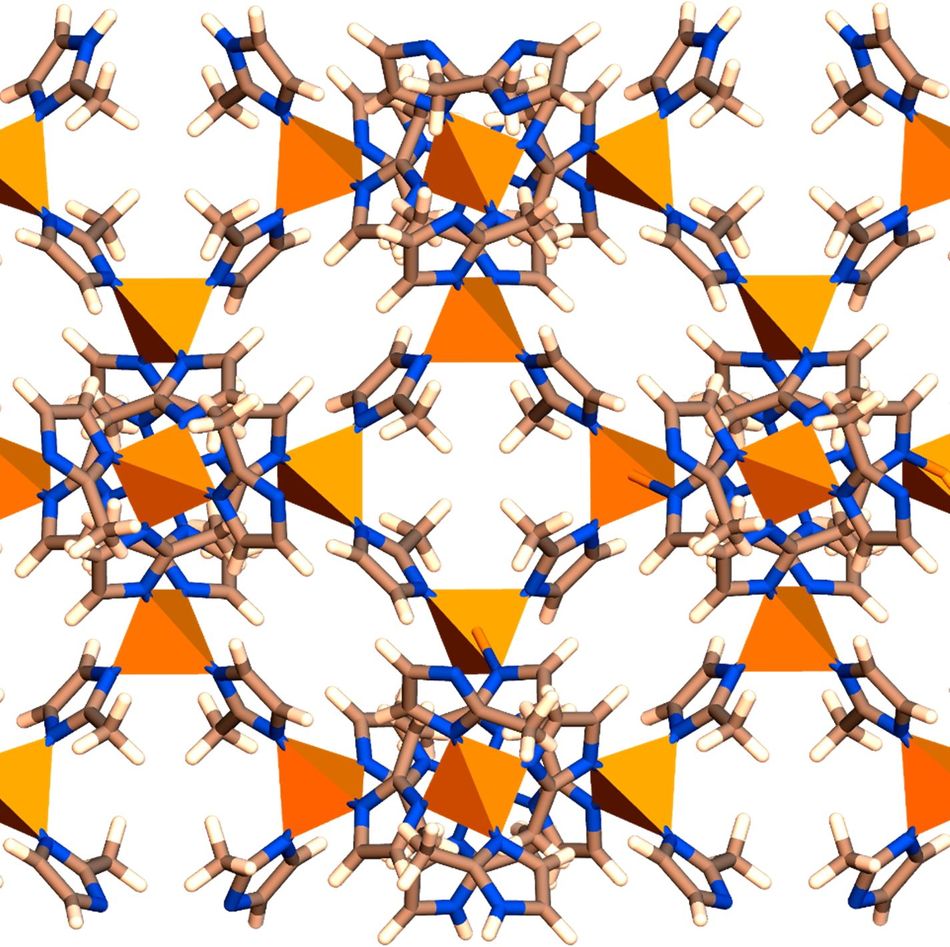 The porous framework of ZIF-67: The metal centers of cobalt (pyramids) are connected to each other by methyl imidazolate (rods and rings). (Graphics: R. Ahmad)

Gaseous propene needs much longer to pass through a column filled with the porous liquid than methane, for example. This is because propene is retained, as it were, in the pores of the nanoparticles, while the smaller methane molecules smoothly pass through. “We want to exploit this property of the dispersion in the future to produce liquid separation membranes,” states Knebel.

Yet, porous liquids can also be used to produce solid separation membranes with particularly advantageous properties. The researchers produced membranes from a plastic material and the chemically modified ZIF-67. They succeeded in increasing the proportion of modified ZIF-67 in the membrane to 47.5 percent without making it mechanically unstable. When the scientists passed a gas mixture consisting of equal parts of propene and propane over two membranes arranged in series, they obtained propene with a purity of at least 99.9 percent, even though the two gas molecules differ in size by not more than 0.2 nanometers.

Besides its separation efficiency, the quantity of a gas mixture that can be passed through in a certain time is decisive for the practical use of such a membrane. This flow rate was at least three times higher with the new membranes than with previous materials. With the separation values achieved, Knebel is convinced that it would pay off for the petrochemical industry for the first time to use membranes instead of conventional distillation processes for gas separation.

It is crucial for the performance of the membranes that as many metal-organic particles as possible can be distributed uniformly in the plastic and that the pores in the nanoparticles are not clogged by solvents during membrane production, i.e. remain empty, so to speak. “We were able to achieve both goals because we did not directly incorporate solid particles into the membrane, but instead proceeded via the porous liquids even though this looks like a detour,” explains Knebel.