An artist's impression of electrons localized in d-orbitals interacting strongly with lattice vibration waves (phonons). The lobular structure depicts the electronic cloud of nickel ions in NiPS3, also known as orbitals. The waves emanating from the orbital structure represent phonon oscillations. The red glowing stripes indicate the formation of a bound state between electrons and lattice vibrations. Credits:Image: Emre Ergecen

In the particle world, sometimes two is better than one. Take, for instance, electron pairs. When two electrons are bound together, they can glide through a material without friction, giving the material special superconducting properties. Such paired electrons, or Cooper pairs, are a kind of hybrid particle — a composite of two particles that behaves as one, with properties that are greater than the sum of its parts.

Now MIT physicists have detected another kind of hybrid particle in an unusual, two-dimensional magnetic material. They determined that the hybrid particle is a mashup of an electron and a phonon (a quasiparticle that is produced from a material’s vibrating atoms). When they measured the force between the electron and phonon, they found that the glue, or bond, was 10 times stronger than any other electron-phonon hybrid known to date.

The particle’s exceptional bond suggests that its electron and phonon might be tuned in tandem; for instance, any change to the electron should affect the phonon, and vice versa. In principle, an electronic excitation, such as voltage or light, applied to the hybrid particle could stimulate the electron as it normally would, and also affect the phonon, which influences a material’s structural or magnetic properties. Such dual control could enable scientists to apply voltage or light to a material to tune not just its electrical properties but also its magnetism.

The results are especially relevant, as the team identified the hybrid particle in nickel phosphorus trisulfide (NiPS3), a two-dimensional material that has attracted recent interest for its magnetic properties. If these properties could be manipulated, for instance through the newly detected hybrid particles, scientists believe the material could one day be useful as a new kind of magnetic semiconductor, which could be made into smaller, faster, and more energy-efficient electronics. 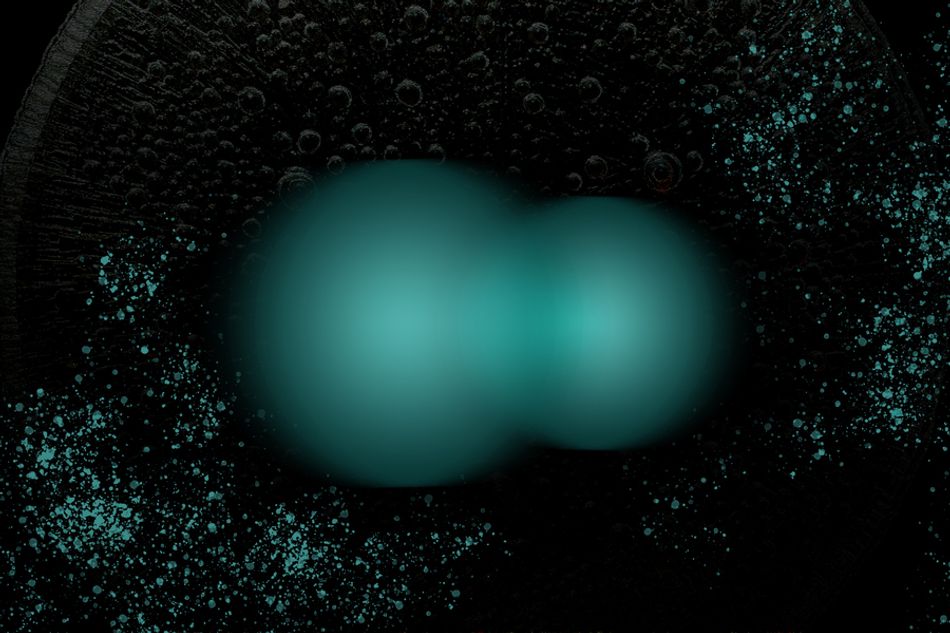 MIT physicists have detected a hybrid particle in an unusual, two-dimensional magnetic material. The hybrid particle is a mashup of an electron and a phonon. Credits:Image: Christine Daniloff, MIT

“Imagine if we could stimulate an electron, and have magnetism respond,” says Nuh Gedik, professor of physics at MIT. “Then you could make devices very different from how they work today.”

Gedik and his colleagues have published their results today in the journal Nature Communications. His co-authors include Emre Ergeçen, Batyr Ilyas, Dan Mao, Hoi Chun Po, Mehmet Burak Yilmaz, and Senthil Todadri at MIT, along with Junghyun Kim and Je-Geun Park of Seoul National University in Korea.

The field of modern condensed matter physics is focused, in part, on the search for interactions in matter at the nanoscale. Such interactions, between a material’s atoms, electrons, and other subatomic particles, can lead to surprising outcomes, such as superconductivity and other exotic phenomena. Physicists look for these interactions by condensing chemicals onto surfaces to synthesize sheets of two-dimensional materials, which could be made as thin as one atomic layer.

In 2018, a research group in Korea discovered some unexpected interactions in synthesized sheets of NiPS3, a two-dimensional material that becomes an antiferromagnet at very low temperatures of around 150 kelvins, or -123 degrees Celsius. The microstructure of an antiferromagnet resembles a honeycomb lattice of atoms whose spins are opposite to that of their neighbor. In contrast, a ferromagnetic material is made up of atoms with spins aligned in the same direction.

In probing NiPS3, that group discovered that an exotic excitation became visible when the material is cooled below its antiferromagnetic transition, though the exact nature of the interactions responsible for this was unclear. Another group found signs of a hybrid particle, but its exact constituents and its relationship with this exotic excitation were also not clear.

Gedik and his colleagues wondered if they might detect the hybrid particle, and tease out the two particles making up the whole, by catching their signature motions with a super-fast laser.

Normally, the motion of electrons and other subatomic particles are too fast to image, even with the world’s fastest camera. The challenge, Gedik says, is similar to taking a photo of a person running. The resulting image is blurry because the camera’s shutter, which lets in light to capture the image, is not fast enough, and the person is still running in the frame before the shutter can snap a clear picture.

To get around this problem, the team used an ultrafast laser that emits light pulses lasting only 25 femtoseconds (one femtosecond is 1 millionth of 1 billionth of a second). They split the laser pulse into two separate pulses and aimed them at a sample of NiPS3. The two pulses were set with a slight delay from each other so that the first stimulated, or “kicked” the sample, while the second captured the sample’s response, with a time resolution of 25 femtoseconds. In this way, they were able to create ultrafast “movies” from which the interactions of different particles within the material could be deduced.

In particular, they measured the precise amount of light reflected from the sample as a function of time between the two pulses. This reflection should change in a certain way if hybrid particles are present. This turned out to be the case when the sample was cooled below 150 kelvins, when the material becomes antiferromagnetic.

“We found this hybrid particle was only visible below a certain temperature, when magnetism is turned on,” says Ergeçen.

To identify the specific constituents of the particle, the team varied the color, or frequency, of the first laser and found that the hybrid particle was visible when the frequency of the reflected light was around a particular type of transition known to happen when an electron moves between two d-orbitals. They also looked at the spacing of the periodic pattern visible within the reflected light spectrum and found it matched the energy of a specific kind of phonon. This clarified that the hybrid particle consists of excitations of d-orbital electrons and this specific phonon.

They did some further modeling based on their measurements and found the force binding the electron with the phonon is about 10 times stronger than what’s been estimated for other known electron-phonon hybrids.

“One potential way of harnessing this hybrid particle is, it could allow you to couple to one of the components and indirectly tune the other,” Ilyas says. “That way, you could change the properties of a material, like the magnetic state of the system.”