A simple and cheap device for detecting neutrons has been developed by a team of EPFL researchers and their collaborators.

The device, based on a special class of crystalline compounds called perovskites, could be used to quickly detect neutrons coming from radioactive materials, e.g. a nuclear reactor that has been damaged or that is being transported nefariously, the researchers say. The work is published in Scientific Reports.

Perovskites based on organic and inorganic elements are hotly tipped to be world-beating materials for solar cell applications. But their talents don’t end with converting sunlight to power: perovskites can also be used to detect specific types of radiation, from visible light to gamma rays. Perovskites are also cheap and easy to make – their specific crystal structure and composition allow them to interact very efficiently with photons in ways that aren’t fully understood yet, but the generated electrons are already poised to be exploited in practical applications.

The perovskite neutron detector is built on work that lead author Pavao Andričević (now a postdoctoral researcher in physics at the Technical University of Denmark) carried out during his PhD studies at EPFL with László Forró (now at the University of Notre Dame, USA). They developed perovskite materials that could detect a wide range of radiation from visible light to gamma rays. But neutrons – which are neutral particles, and not photons – have remained out of reach for perovskite detectors. Until now.

The perovskites developed by Andricevic and Forró’s team are lead- and bromine-containing single crystals of a compound called methylammonium lead tri-bromide. To try and detect neutrons directly, the team first placed these crystals in the path of a neutron source. This was done with the help of Gabor Nafradi (Rutherford Appleton Laboratory, UK) and the team of Andreas Pautz (Laboratory of Reactor Physics, EPFL). The neutrons, hitting the crystals, penetrate into the nucleus of the atoms within the crystal, which excites them into a higher energy state. When they relax and decay, gamma rays are produced. These gamma photons charge the perovskite, producing a tiny current that can be measured.

But this current was so tiny that the team realized something extra was needed if they were going to make a practical neutron detector. And that extra something was found in a thin foil of gadolinium metal, which is much better at absorbing neutrons compared to the naked perovskite crystal. When neutrons interact with the gadolinium’s atoms, they are excited into a higher energetic state, and then decay emitting gamma radiation.

Gadolinium is much more efficient at creating gamma photons than perovskites, which had already been developed as a great gamma detector. Putting the two together was simple and very effective; the researchers added a carbon electrode, and the resulting electrons produced in the perovskite were easy to measure. “You just put on a voltmeter or a current meter,” says Forró.

To further improve the detector, the team then grew the perovskite crystal around the foil. These particular perovskites are remarkable because their crystal structure isn’t affected if they have a foreign body within them. “The property of this material is such that it can engulf anything, from a fly to a crocodile, to gadolinium,” says Márton Kollár, the chemist in the team. “So it grows around the object, and even when it grows around, it stays crystalline. So this is a really fabulous feature of this material.”

An added benefit of the device is that it can measure the direction of neutron flow, and the size of the flow – so it could be a really useful scanning device if taken up by a commercial company.

“It’s simple, it’s cheap, and it’s cost-effective,” says Forró. Now that the team has shown that the device works, the next step is refinement and potential commercialization. “This is a proof of principle, that it works,” says Forró. “And now we can think about configuration for a very efficient detector.” 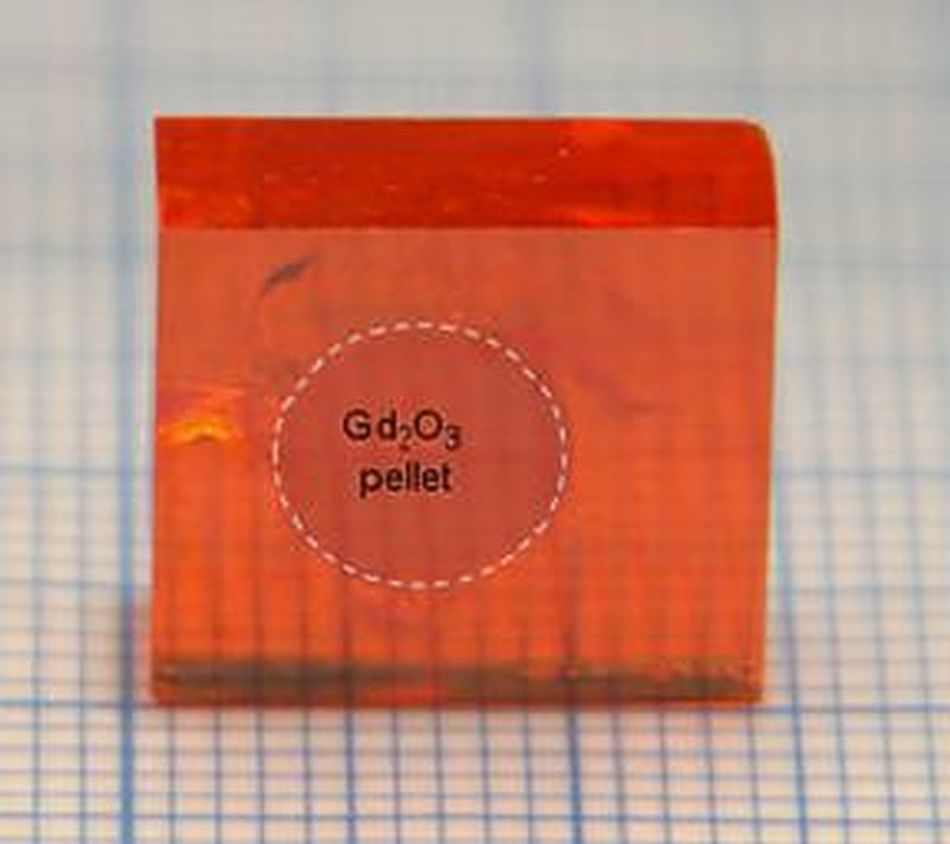