Schematics of the protection mechanism of boron nitride (BN) and characterizations of BN nanofilm. The left visual shows that a Lithium aluminum titanium phosphate (LATP) pellet that touches lithium metal will be immediately reduced. The severe side reaction between lithium and solid electrolyte will fail the battery in several cycles. The right shows that an artificial BN film is chemically and mechanically robust against lithium. It electronically isolates LATP from lithium, but still provides stable ionic pathways when infiltrated by polyethylene oxide (PEO), and thus enables stable cycling. IMAGE CREDIT: QIAN CHENG/COLUMBIA ENGINEERING

The grand challenge to improve energy storage and increase battery life, while ensuring safe operation, is becoming evermore critical as we become increasingly reliant on this energy source for everything from portable devices to electric vehicles. A Columbia Engineering team led by Yuan Yang, assistant professor of materials science and engineering, announced today that they have developed a new method for safely prolonging battery life by inserting a nano-coating of boron nitride (BN) to stabilize solid electrolytes in lithium metal batteries. Their findings are outlined in a new study published by Joule. 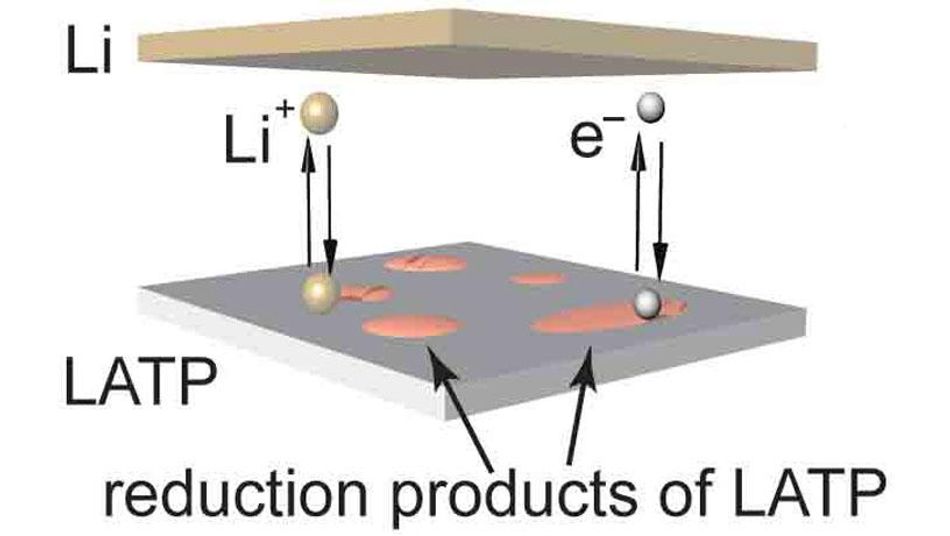 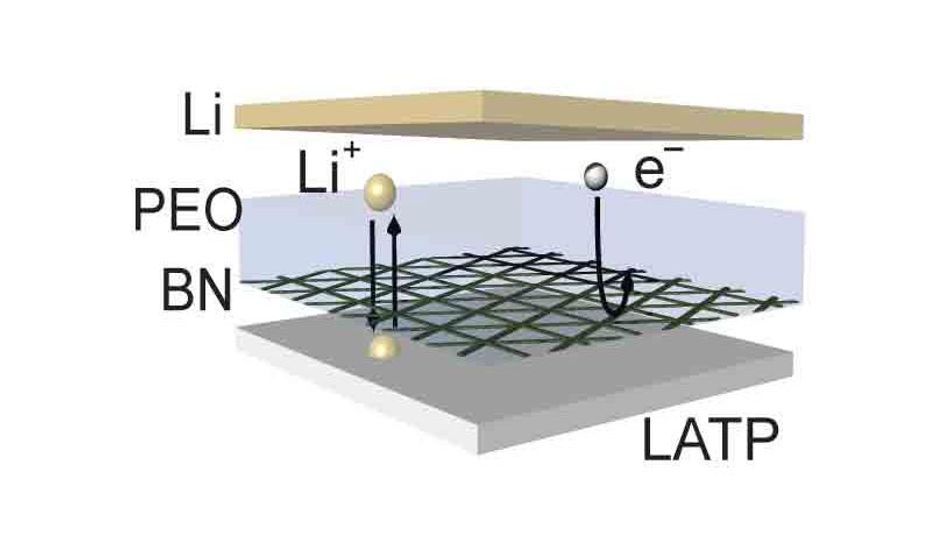 Schematics of the protection mechanism of boron nitride (BN) and characterizations of BN nanofilm. The left visual shows that a Lithium aluminum titanium phosphate (LATP) pellet that touches lithium metal will be immediately reduced. The severe side reaction between lithium and solid electrolyte will fail the battery in several cycles. The right shows that an artificial BN film is chemically and mechanically robust against lithium. It electronically isolates LATP from lithium, but still provides stable ionic pathways when infiltrated by polyethylene oxide (PEO), and thus enables stable cycling. IMAGE CREDIT: QIAN CHENG/COLUMBIA ENGINEERING

While conventional lithium ion (Li-ion) batteries are currently widely used in daily life, they have low energy density, resulting in shorter battery life, and, because of the highly flammable liquid electrolyte inside them, they can short out and even catch fire. Energy density could be improved by using lithium metal to replace the graphite anode used in Li-ion batteries: lithium metal’s theoretical capacity for the amount of charge it can deliver is almost 10 times higher than that of graphite. But during lithium plating, dendrites often form and, if they penetrate the membrane separator in the middle of the battery, they can create short-circuits, raising concerns about battery safety.

“We decided to focus on solid, ceramic electrolytes. They show great promise in improving both safety and energy density, as compared with conventional, flammable electrolytes in Li-ion batteries,” says Yang. “We are particularly interested in rechargeable solid-state lithium batteries because they are promising candidates for next-generation energy storage.”

“Lithium metal is indispensable for enhancing energy density and so it’s critical that we be able to use it as the anode for solid electrolytes,” says Qian Cheng, the paper’s lead author and a postdoctoral research scientist in the department of applied physics and applied mathematics who works in Yang's group. “To adapt these unstable solid electrolytes for real-life applications, we needed to develop a chemically and mechanically stable interface to protect these solid electrolytes against the lithium anode. It is essential that the interface not only be highly electronically insulating, but also ionically conducting in order to transport lithium ions. Plus, this interface has to be super-thin to avoid lowering the energy density of batteries.”

To address these challenges, the team worked with colleagues at Brookhaven National Lab and the City University of New York. They deposited 5~10 nm boron nitride (BN) nano-film as a protective layer to isolate the electrical contact between lithium metal and the ionic conductor (the solid electrolyte), along with a trace quantity of polymer or liquid electrolyte to infiltrate the electrode/electrolyte interface. They selected BN as a protective layer because it is chemically and mechanically stable with lithium metal, providing a high degree of electronic insulation. They designed the BN layer to have intrinsic defects, through which lithium ions can pass through, allowing it to serve as an excellent separator. In addition, BN can be readily prepared by chemical vapor deposition to form large-scale (~dm level), atomically thin scale (~nm level), and continuous films.

“While earlier studies used polymeric protection layers as thick as 200 µm, our BN protective film, at only 5~10 nm thick, is record-thin—at the limit of such protection layers—without lowering the energy density of batteries,” Cheng says. “It’s the perfect material to function as a barrier that prevents the invasion of lithium metal to solid electrolyte. Like a bullet-proof vest, we’ve developed a lithium-metal-proof ‘vest’ for unstable solid electrolytes and, with that innovation, achieved long-cycling lifetime lithium metal batteries.”

The researchers are now extending their method to a broad range of unstable solid electrolytes and further optimizing the interface. They expect to fabricate solid-state batteries with high performance and long-cycle lifetimes.

"Magic" alloy could spur the next generation of solar cells