The past 60 years have not seen any fundamental change to the design of bridge decks for suspensions bridges – best known in Denmark from the Great Belt Link. To accommodate the request for ever longer bridges, the Technical University of Denmark (DTU) and COWI, studied how to optimise structures to reduce the weight of the bridge deck, in particular increasing the span. Recently published in the recognised scientific magazine Nature Communications, the results of that research project indicate vast potential.

“We applied different methods for examining how to better utilise materials, which primarily consist of steel and concrete. Initially, we sought to optimise their use in traditional structures by using transverse diaphragms in the bridge deck, thereby achieving a theoretical weight reduction of up to 14 per cent,” says Mads Jacob Baandrup, who carried out the analyses in connection with his PhD project and today works as engineer in COWI's bridges department.

With a view to achieving additional savings, the researchers looked at the possibility of altering the structural design. That was done by using topology optimisation, a method known in car and aircraft industries, that had not previously been used for large-scale building structures.

“In popular terms, it’s about ‘emptying’ a bridge girder of its existing elements, providing complete freedom for choosing a new design. The inner volume of the bridge girder is then divided into a structure of very small voxels (3D pixels), like small dice. The topology optimisation method is then used for determining whether each individual voxel should consist of air or steel material. The result is a bridge girder design that uses the least possible steel without impairing the strength of the structure,” says Associate Professor Niels Aage, DTU Mechanical Engineering, who is one of the world’s leading scientists in large-scale optimisation and was responsible for the project analyses.

Specifically, a bridge element measuring 30 x 5 x 75 metres was analysed, divided into two billion voxels, each no bigger than a few centimetres. The result was an incredibly extensive calculation performed by a supercomputer, which would have taken an ordinary computer 155 years to do and is the largest structural optimisation ever carried out.

The computer calculation presented input for how to best structure the design space of the bridge deck. Among other things, that meant curving part of the currently straight transverse diaphragms, making it possible to shave off 28 per cent of the material that is used for bridge decks, and thereby achieve a corresponding reduction of the CO₂ emissions generated by the production and transport of concrete and steel.

“We interpreted and adjusted calculations so the result became a suggested bridge girder structure with the optimum design that can be carried out without too costly production methods. The economic aspect is important in order for the design to be a realistic option for future bridge projects,” says Mads Jacob Baandrup.

"We believe there are huge perspectives to using topology optimisation for ensuring sustainable design of other large building structures, such as high-rises, stadiums or highway bridges"

Naturally, additional analyses will be required before the new design can be used for building bridges, but COWI is confident that the results of the research project add valuable knowledge to tomorrow’s suspension bridges.

“The new bridge girder design can be converted into a weight and CO₂ reduction of up to 20 per cent for the entire bridge, which of course benefits the climate. COWI is also involved in a wide range of the world’s largest bridge projects, so a potential new design will also benefit our customers and society,” says Technical Director Henrik Polk, COWI, who participated in the research.

DTU is also very excited about the results.

”We believe there are huge perspectives to using topology optimisation for ensuring sustainable design of other large building structures, such as high-rises, stadiums or highway bridges. We want to explore that field, and since the construction industry accounts for 39 per cent of global CO₂ emissions, almost any reduction can be of interest,” says Professor Ole Sigmund, DTU Mechanical Engineering. 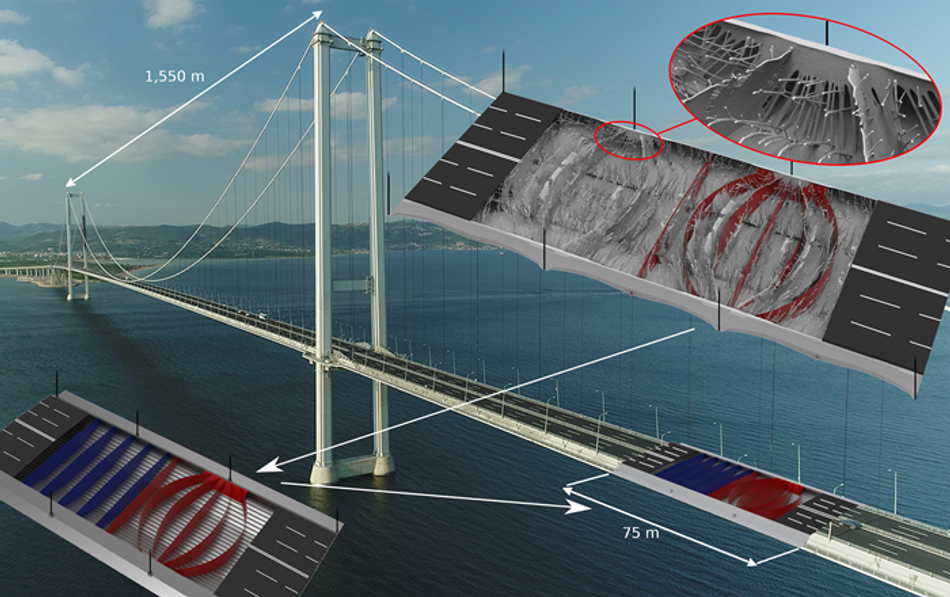 The Turkish Osman Gazi suspension bridge is visible in the background and the topology optimisation result in the top right. Subsequently, the result of the optimisation – organic in appearance and highly complex – was interpreted, which led to a new, simpler design (marked in red). Compared to the conventional design (marked in blue), the new design entails weight savings of more than 28 per cent for the bridge girder. The white arrows indicate the course of the design process.

In spite of being 80 percent water, cartilage is tough stuff. Now, a synthetic material can pack even more H2O without compromising on strength.