Young researcher has optimized the simulation models used for developing new hearing aids. The necessary calculations can now be made up to 20 times faster.

Hearing aids are becoming ever smaller. The smallest models are positioned completely inside the ear and are so small that they can hardly be seen. The hearing aids must still contain the same features as previously, and they should preferably be able to provide even better amplification of sound from the surroundings. This means that all components are becoming smaller and are located more closely to each other, and the volume has been turned all the way up.

We have probably all experienced situations in which a microphone has come too close to a loudspeaker, thus producing howling. This acoustic feedback also occurs in a hearing aid and causes great nuisance to both users and their surroundings. It is therefore one of the challenges that hearing aid producers are working to solve. But the solution is not obvious, as it requires both insight into acoustics and mechanical engineering.

“In a hearing aid, the sound moves from the loudspeaker both as acoustic waves and vibrations to the microphone. With computer models, producers of hearing aids can identify the most relevant feedback by—so to speak—‘turning off’ either vibrations or acoustics in the model. The models and the underlying mathematical calculations are, however, highly complex,” says Ester Creixell Mediante, who is the young researcher behind the development of the new faster model.

A dream about faster design processes
The initiative for the project was taken by the Danish hearing aid manufacturer Oticon.

“We had a dream of being able to optimize the design of our hearing aids without having to wait weeks or months for the computer models to finish calculating even small ideas for changes. However, we didn’t ourselves have the resources or the mathematical competences for handling that task,” says Lead Developer & Team Manager Martin Larsen, Oticon.

It was therefore an obvious choice to enter into collaboration with DTU Electrical Engineering to examine the possibility of reducing the many equations underlying the model. The collaboration became a joint PhD project, which Ester Creixell Mediante was hired to perform.

Ester Creixell Mediante initiated the work by reducing the mathematical complexity behind the model, and she developed a method based on algebraic operations in which only relevant information is saved and unnecessary mathematical details are left out.

She succeeded in reducing the computational times—making them up to 20 times faster—which means that they can now be completed in days instead of weeks. 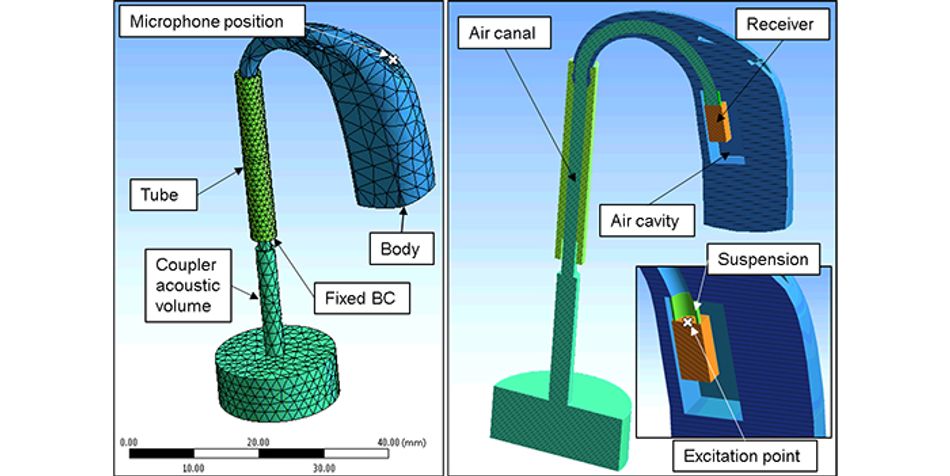 Application of the model
After completing her PhD project, Ester Creixell Mediante has been employed with Oticon, where she has incorporated the new and faster calculation methods in the computer models used by the company's developers. In addition, she has continued working on the second part of her PhD project, which focused on whether topology optimization can be used in the development of hearing aids.

“Topology optimization is a computer-based method suitable for calculating, for example, how an aeroplane wing—or a bridge pier—can be designed optimally to ensure that it has the strength required, while also weighing as little as possible. Here, the computer peels off all unnecessary parts and makes a design proposal. We would like to examine whether you can use the same concept to solve the acoustic design challenges we’re facing with hearing aids,” says Martin Larsen.

“This process is difficult in a hearing aid, where acoustics and mechanical engineering are so closely connected. But—as part of her new job—Ester Creixell Mediante has entered into collaboration with DTU on studying relevant methods.”

Supercomputer simulation could show us how to stop COVID

As progress in traditional computing slows, new forms of computing are coming to the forefront. At Penn State, a team of engineers is attempting to pioneer a type of computing that mimics the efficiency of the brain’s neural networks while exploiting the brain’s analog nature.

Supercomputer simulation could show us how to stop COVID

In the battle against COVID-19 you need as many weapons as possible in your armoury. And it doesn't hurt if you have Australia and the Southern Hemisphere's most powerful and fastest supercomputer.