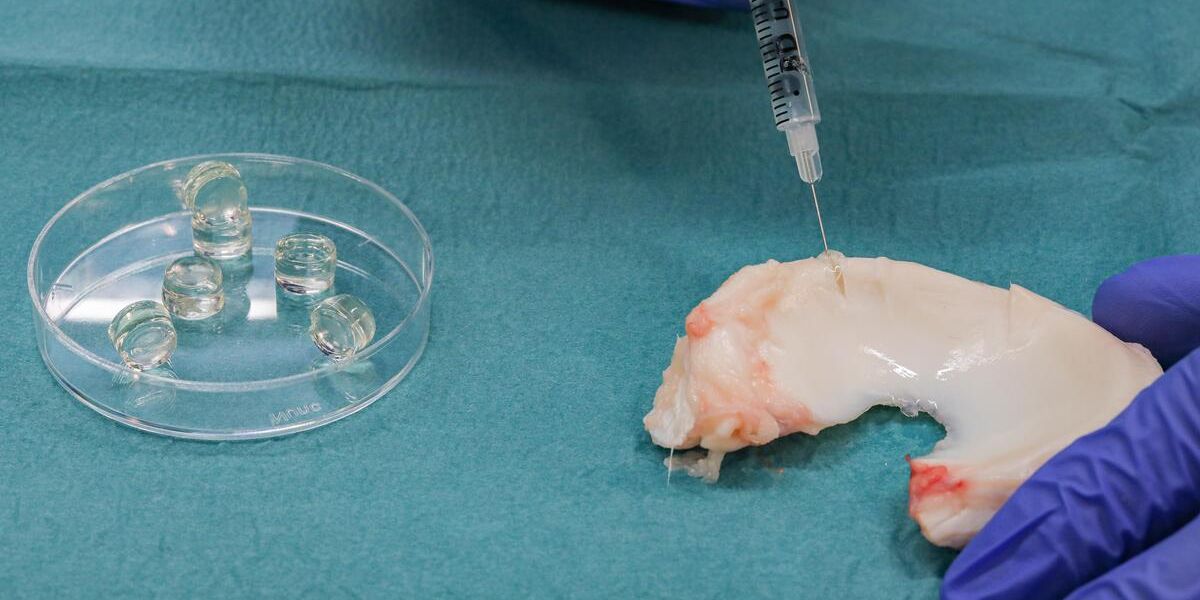 The gel is injected directly into the tissue. © Alain Herzog 2021 EPFL

EPFL scientists have developed an injectable gel that can attach to various kinds of soft internal tissues and repair tears resulting from an accident or trauma.

Our soft tissues can be torn during a ski accident, a car accident or an accident in the home, for example. And surgeons can have a hard time binding the tissue back together, as stitches often do more harm than good. According to Dominique Pioletti, the head of the Laboratory of Biomechanical Orthopedics at EPFL’s School of Engineering, such surgeries don’t always produce optimal outcomes because the repaired tissue usually doesn’t heal properly. This tends to be the case for tears in cartilage and the cornea, for instance.

Researchers around the world have been trying for years to develop an adhesive for soft tissue that can withstand the natural stresses and strains within the human body. Pioletti’s group has now come up with a novel family of injectable biomaterials that can bind to various forms of soft tissue. Their bioadhesives, in the form of a gel, can be used in a variety of injury-treatment applications. Their research has just been published in Macromolecular Rapid Communications.

The hydrogel produced at LBO is made up of 85% water and has two key advantages: it can be injected anywhere in the human body, and it demonstrates high intrinsic adhesion with no extra surface treatment. “What makes our hydrogel different is that it changes consistency while providing high adhesion to soft tissues,” says Peyman Karami, a postdoc at Pioletti’s lab who has developed the gel during his PhD. “It’s injected in a liquid form, but then sets when a light source is applied, enabling it to adhere to surrounding tissue.”

The scientists’ hydrogel works through an entirely new design that allows for independent control of its mechanical and adhesive properties. The result is a versatile hydrogel that doctors can use as a glue for soft tissue throughout the human body.

To obtain these versatile properties in their hydrogel, the scientists took the base polymer and modified it with the compounds that play an important role in tissue adhesion. The first is known as Dopa and is derived from mussels. “Dopa is what lets mussels attach firmly to any kind of surface – organic or otherwise,” says Pioletti. The second is an amino acid that our bodies make naturally. 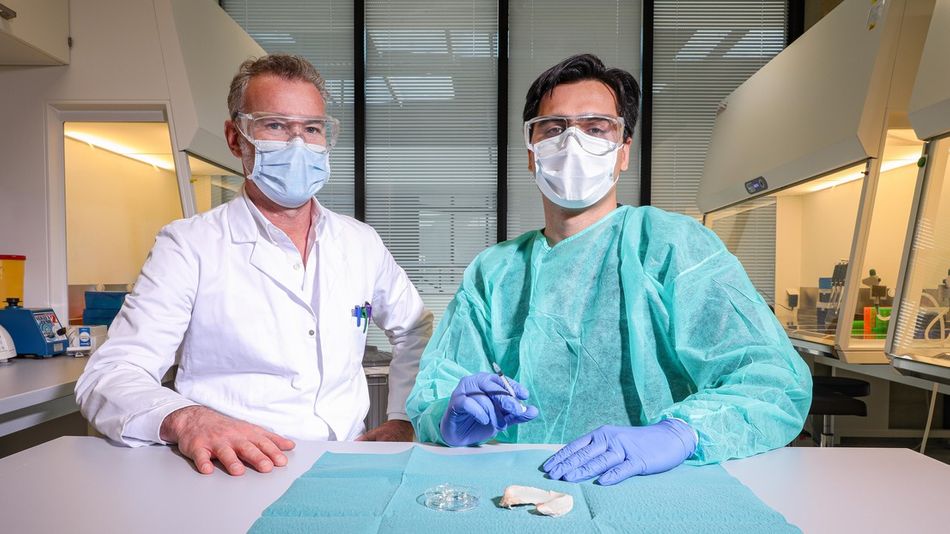 “The advantage of our hydrogel compounds is that, unlike some medical adhesives, they don’t interfere with the body’s chemical reactions, meaning our hydrogel is fully biocompatible,” says Karami.

Their hydrogel also has unique energy-dissipation characteristics that enhance its adhesive capability. Karami adds: “We had to achieve an adhesion mechanism for injectable hydrogels, through the resulting synergy between interfacial chemistry and hydrogel mechanical properties. The hydrogel is capable of dissipating the mechanical energy produced when the hydrogel deforms, so that it protects the interactions at the interface between the hydrogel and surrounding tissue.”

Yet another benefit to this hydrogel is that it can carry drugs or cells to stimulate the healing process, especially for tissue like cartilage that doesn’t regenerate on its own. And because the hydrogel is biodegradable, it’s reabsorbed into the human body as the surrounding tissue heals.

“Our in vitro tests showed that the hydrogel binds to many different kinds of tissue, including cartilage, meniscus, heart, liver, lung, kidney and cornea,” says Pioletti. “We’ve made a sort of universal hydrogel.”

The scientists have just received an Innosuisse grant to study potential orthopedic applications in association with surgeons at the Lausanne University Hospital (CHUV). They hope to be able to launch their hydrogel on the market within the next five years.

Objects can now be 3D-printed in opaque resin

To make this possible, researchers had to create a Jello-like substance that could defy one of the fundamental laws of nature.

Thus, by imitating the way the human brain solves everyday problems, neuromorphic systems have tremendous potential to revolutionize big data analysis and pattern recognition problems that are a struggle for current digital technologies.