Embedded memories play a crucial role in running our digital devices, from computers and smartphones all the way to the internet of things and entire telecom networks. In fact, embedded memory is what takes up most of the silicon surface inside those systems. Manufacturers are therefore looking for ways to shrink the amount of space that embedded memory takes up, so that they can develop devices that are smaller, cheaper and more powerful. A team of researchers from EPFL and Bar Ilan University (BIU) in Israel have taken a major step in that direction with a novel design that slashes the amount of silicon needed for a given amount of storage by 50%, while reducing the power requirement at the same time. They have already obtained seven patents for their work and are in the process of creating a startup, RAAAM, to market their technology to semiconductor-industry heavyweights.

The trick is using fewer transistors

Embedded memories work through a series of transistors that act like switches; a single chip can hold billions of transistors. The system developed by the EPFL and BIU researchers arranges the transistors in a different way that uses shortcuts to save a considerable amount of space and energy. Their memory – called GC-eDRAM – needs only two or three transistors to store a bit of data, compared with six or eight in conventional SRAM. That frees up space on chips to add more memory, or to make them smaller so there’s more room for other components. It also reduces the amount of power needed to process a given amount of data. 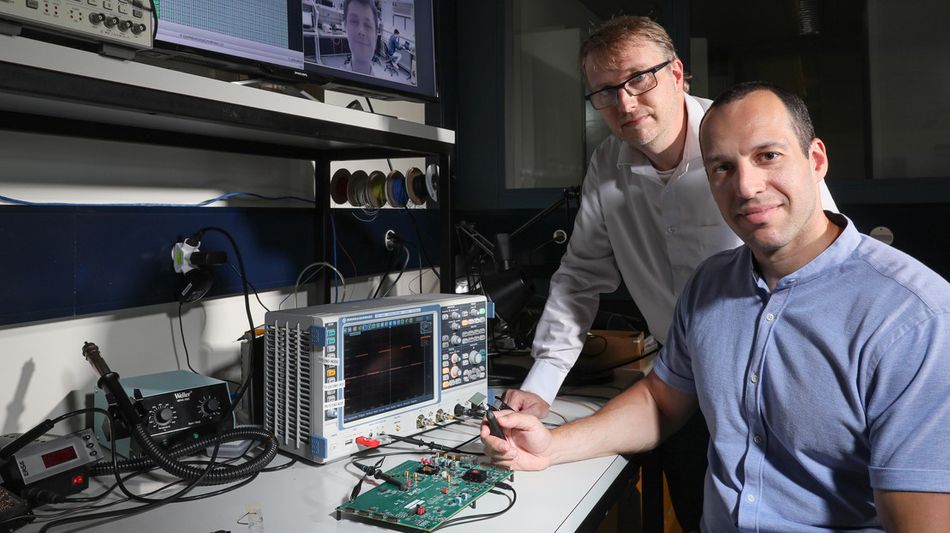 Over the past decade there have been major advancements in computing logic but no revolutionary developments in embedded memories. “Chip components have become a lot smaller, but in terms of the fundamentals, they’re pretty much the same,” says Andreas Burg, a professor at EPFL’s Telecommunications Circuits Laboratory and one of RAAAM’s founders. Other types of eDRAM are already on the market, “but they aren’t used widely in the semiconductor industry because they aren’t compatible with standard chip-fabrication processes. They require special fabrication steps that are complex and costly,” says Robert Giterman, a postdoc researcher at EPFL and CEO of RAAAM. The GC-eDRAM his team developed is just as small and powerful as other types, but it can be easily integrated into standard processes.

The team has already worked with top-tier semiconductor manufacturers to test their GC-eDRAM, running trials on 16 nm to 180 nm chips containing around a dozen integrated circuits with an embedded memory capacity of up to 1 Mb. “Manufacturers can replace the existing memory on their chips with ours, without having to change anything else,” says Burg from the School of Engineering at EPFL.

The startup plans to sell its technology through license agreements. According to Giterman, “our denser embedded memories will let manufacturers cut costs considerably.” RAAAM’s founders – all experts in embedded memory systems – believe their technology can capture a significant share of the hefty embedded memory market. And they aren’t the only ones optimistic about the young firm’s prospects: RAAAM is one of the winners of this year’s >>venture>> awards, in the Industrials & Engineering category.

EPFL scientists have developed the first micro-structured fibers with a viscous metal inside – a perfect example of what cross-disciplinary teamwork can achieve.