A new kind of fiber developed by researchers at MIT and in Sweden, dubbed OmniFibers, contain a fluid channel in the center which can be activated and allow the fiber to act as an artificial muscle. Credits: Courtesy of the researchers

A new kind of fiber developed by researchers at MIT and in Sweden can be made into clothing that senses how much it is being stretched or compressed, and then provides immediate tactile feedback in the form of pressure, lateral stretch, or vibration. Such fabrics, the team suggests, could be used in garments that help train singers or athletes to better control their breathing, or that help patients recovering from disease or surgery to recover their breathing patterns.

The multilayered fibers contain a fluid channel in the center, which can be activated by a fluidic system. This system controls the fibers’ geometry by pressurizing and releasing a fluid medium, such as compressed air or water, into the channel, allowing the fiber to act as an artificial muscle. The fibers also contain stretchable sensors that can detect and measure the degree of stretching of the fibers. The resulting composite fibers are thin and flexible enough to be sewn, woven, or knitted using standard commercial machines.

The fibers, dubbed OmniFibers, are being presented this week at the Association for Computing Machinery’s User Interface Software and Technology online conference, in a paper by Ozgun Kilic Afsar, a visiting doctoral student and research affiliate at MIT; Hiroshi Ishii, the Jerome B. Wiesner Professor of Media Arts and Sciences; and eight others from the MIT Media Lab, Uppsala University, and KTH Royal Institute of Technology in Sweden.

The new fiber architecture has a number of key features. Its extremely narrow size and use of inexpensive material make it relatively easy to structure the fibers into a variety of fabric forms. It’s also compatible with human skin, since its outer layer is based on a material similar to common polyester. And, its fast response time and the strength and variety of the forces it can impart allow for a rapid feedback system for training or remote communications using haptics (based on the sense of touch).

Afsar says that the shortcomings of most existing artificial muscle fibers are that they are either thermally activated, which can cause overheating when used in contact with human skin, or they have low-power efficiency or arduous training processes. These systems often have slow response and recovery times, limiting their immediate usability in applications that require rapid feedback, she says.

As an initial test application of the material, the team made a type of undergarment that singers can wear to monitor and play back the movement of respiratory muscles, to later provide kinesthetic feedback through the same garment to encourage optimal posture and breathing patterns for the desired vocal performance. “Singing is particularly close to home, as my mom is an opera singer. She’s a soprano,” she says. In the design and fabrication process of this garment, Afsar has worked closely with a classically trained opera singer, Kelsey Cotton.

“I really wanted to capture this expertise in a tangible form,” Afsar says. The researchers had the singer perform while wearing the garment made of their robotic fibers, and recorded the movement data from the strain sensors woven into the garment. Then, they translated the sensor data to the corresponding tactile feedback. “We eventually were able to achieve both the sensing and the modes of actuation that we wanted in the textile, to record and replay the complex movements that we could capture from an expert singer’s physiology and transpose it to a nonsinger, a novice learner’s body. So, we are not just capturing this knowledge from an expert, but we are able to haptically transfer that to someone who is just learning,” she says. 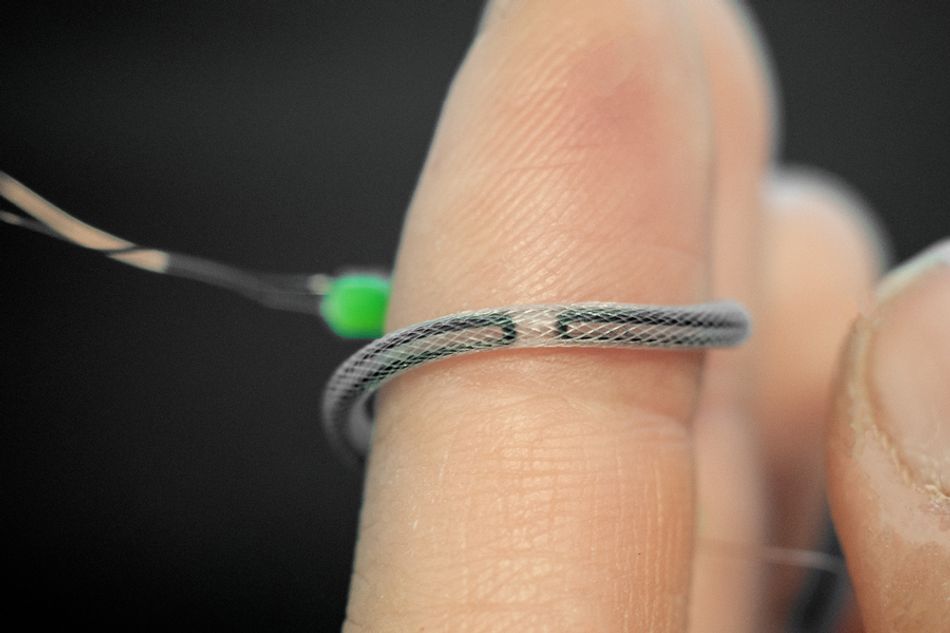 The key features of the new fiber architecture include its extremely narrow size and use of inexpensive materials, which make it relatively easy to structure the fibers into a variety of fabric forms. Credits: Courtesy of the researchers

Though this initial testing is in the context of vocal pedagogy, the same approach could be used to help athletes to learn how best to control their breathing in a given situation, based on monitoring accomplished athletes as they carry out various activities and stimulating the muscle groups that are in action, Afsar says. Eventually, the hope is that such garments could also be used to help patients regain healthy breathing patterns after major surgery or a respiratory disease such as Covid-19, or even as an alternative treatment for sleep apnea (which Afsar suffered from as a child, she says).

The physiology of breathing is actually quite complex, explains Afsar, who is carrying out this work as part of her doctoral thesis at KTH Royal Institute of Technology. “We are not quite aware of which muscles we use and what the physiology of breathing consists of,” she says. So, the garments they designed have separate modules to monitor different muscle groups as the wearer breathes in and out, and can replay the individual motions to stimulate the activation of each muscle group.

Ishii says he can foresee a variety of applications for this technology. “Everybody has to breathe. Breathing has a major impact on productivity, confidence, and performance,” he says. “Breathing is important for singing, but also this can help when recovering from surgery or depression. For example, breathing is so important for meditation.”

The system also might be useful for training other kinds of muscle movements besides breathing, he says. For example, “Many of our artists studied amazing calligraphy, but I want to feel the dynamics of the stroke of the brushes,” which might be accomplished with a sleeve and glove made of this closed-loop-feedback material. And Olympic athletes might sharpen their skills by wearing a garment that reproduces the movements of a top athlete, whether a weightlifter or a skier, he suggests. 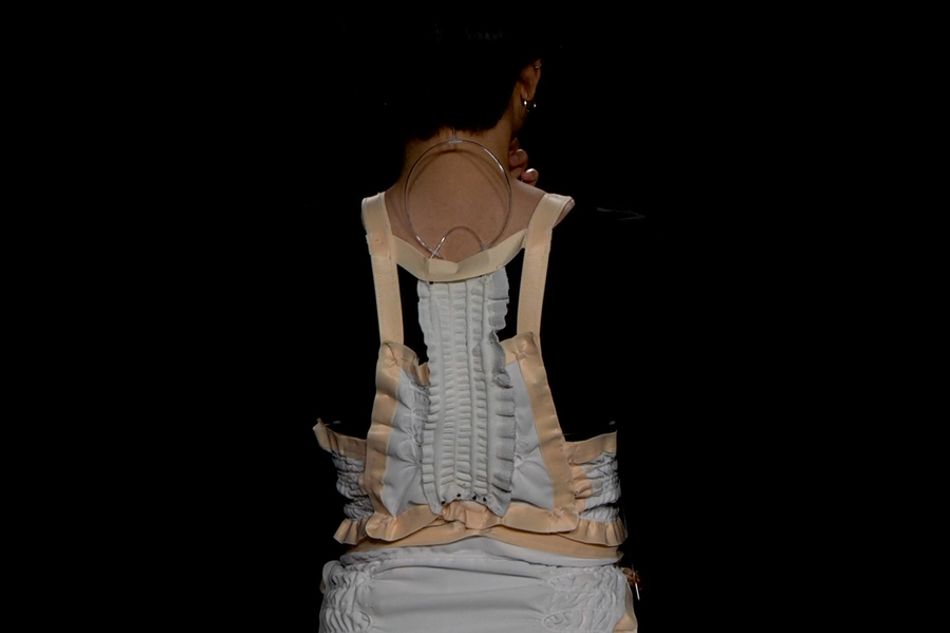 As an initial test application of the material, the team made a type of undergarment that singers can wear to monitor and play back the movement of respiratory muscles, to later provide kinesthetic feedback through the same garment to encourage optimal posture and breathing patterns for the desired vocal performance. Credits: Courtesy of the researchers

The soft fiber composite, which resembles a strand of yarn, has five layers: the innermost fluid channel, a silicone-based elastomeric tube to contain the working fluid, a soft stretchable sensor that detects strain as a change in electrical resistance, a braided polymer stretchable outer mesh that controls the outer dimensions of the fiber, and a nonstretchy filament that provides a mechanical constraint on the overall extensibility.

“The fiber-level engineering and fabric-level design are nicely integrated in this study,” says Lining Yao, an assistant professor of human-computer interaction at Carnegie Mellon University, who was not associated with this research. This work demonstrates “different machine knitting techniques, including inlay and active spacer fabric, advanced the state-of-the-art regarding ways of embedding actuating fibers into textiles,” she says. “Integrating strain sensing and feedbacks is essential when we talk about wearable interactions with actuating fabrics.”

Afsar plans to continue working on making the whole system, including its control electronics and compressed air supply, even more miniaturized to keep it as unobtrusive as possible, and to develop the manufacturing system to be able to produce longer filaments. In coming months, she plans to begin experiments in using the system for transferring skills from an expert to a novice singer, and later to explore different kinds of movement practices, including those of choreographers and dancers.

Flexible Material Shows Potential for Use in Fabrics to Heat, Cool

A film made of tiny carbon nanotubes (CNT) may be a key material in developing clothing that can heat or cool the wearer on demand.

Engineers at Caltech and JPL have developed a material inspired by chain mail that can transform from a foldable, fluid-like state into specific solid shapes under pressure.