Many connected devices, films downloaded in seconds, autonomous driving: the extremely fast 5G should make all this possible. The problem is that the fastest form of 5G now requires very fast connections within the network, which only works at short distances. New antenna technology has therefore been developed at Eindhoven University of Technology (TU/e), making long-distance communication possible for this fast form of 5G and its successor, 6G. The first practical test was recently carried out from the roof of two buildings on the TU/e campus and proved successful.

Watch a video from MaxWaves about the campus experiment. Photo:L Ksenia Korzun

The next generation of wireless networks, 5G, is expected to be rolled out commercially in 2020. This first phase, using relatively low frequencies, is slightly faster than 4G. But the higher the frequency, the more data you can send. This is why efforts are being made towards a form of 5G that works at much higher frequencies – 26 GHz, to be precise. The capacity then immediately increases by a factor of 100, which is required for self-driving cars (for example).

This increase in speed will require a similar increase in the capacity of the connections between the base stations of the network. Very high frequencies (80 GHz) will be used for these connections.  "The problem with sending signals at these high frequencies is that they are only strong enough at a very short distance," says Bart Smolders, Professor of Telecommunications. 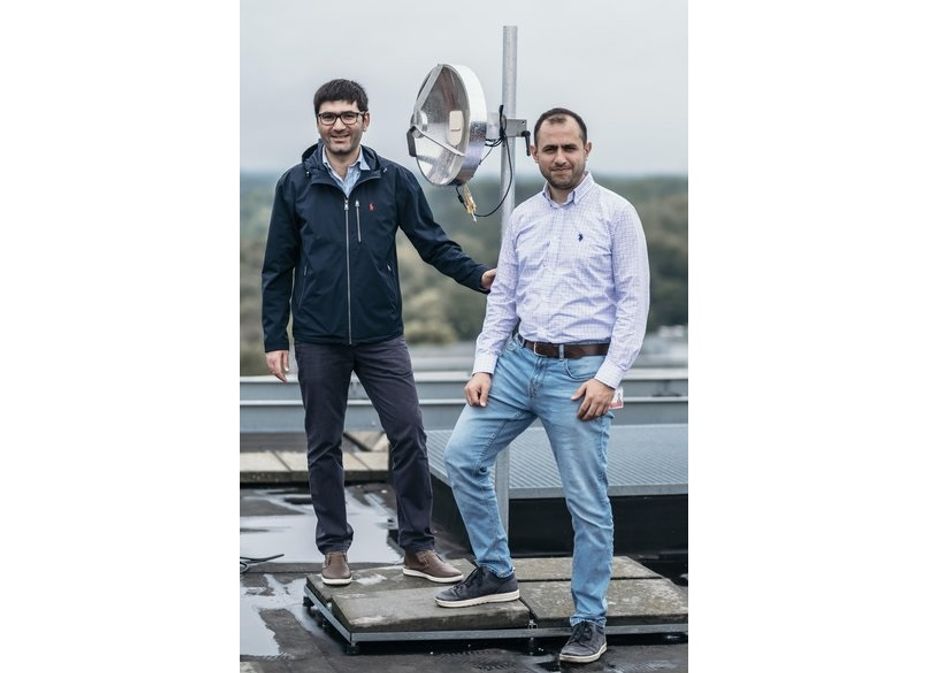 Ronis Maximidis (left) and Ali Al-Rawi from MaxWaves next to their demonstrator. Photo: Ksenia Korzun

For a number of years, work has been carried out at TU/e on antennas that enable signals at these high frequencies (and even higher, such as 6G) over longer distances. The technology uses a constellation of electronically-controlled antennas, which electronically steer the radio beams in the right direction, combined with a dish antenna to focus the energy and increase the distance. Through spin-off MaxWaves, the technology has been further developed into a demonstrator – the first step towards a prototype.

"The antennas bundle multiple signals into a very narrow, strong beam of radio waves, similar to a laser beam," says Ronis Maximidis, PhD candidate at TU/e and co-founder of MaxWaves. According to Maximidis, the result is a signal strength 100 times higher than current techniques, which means that a distance five times greater can be achieved on a sunny day.

The high-frequency signals require the transmitting and receiving antennas to be precisely aligned with each other under all weather conditions. Maximidis: “Our system aligns the signals electronically so that the antennas don’t have to move mechanically. It looks like magic!”

The system was recently tested for the first time in practice. A connection was successfully established with the antennas from the roof of two buildings on the TU Eindhoven campus. “Through this test, we demonstrated that our long-distance concept works outside the lab. The next step is to now build a prototype. Our goal is to provide the whole world with 5G and 6G, even in the most remote places," says Maximidis.

The waves of our wireless future

From a bacterium that is invisible to the human eye to the full length of a football field: the electromagnetic waves that inhabit our world literally have all shapes and sizes.

By 2050, seven out of ten people are expected to live in a city. The smart city concept offers the promise of a healthier, safer, and greener lifestyle than that enjoyed by today's urban population. A future built on interconnected smart cities is one with enormous potential for all.

Assembling tiny chips into unique programmable surfaces, Princeton researchers have created a key component toward unlocking a communications band that promises to dramatically increase the amount of data wireless systems can transmit.