A multidisciplinary team of researchers has created an algorithm that deciphers the huge data sets from subsurface fiber-optic arrays to produce a clear picture of shale reservoir fracturing results. | Image: Getty Images

Millions of barrels of oil are produced daily from U.S. shale reservoirs. Yet this quantity is small in comparison to the actual amount of oil locked away in these subsurface rocks. The oil and gas industry has put fiber-optic sensing cables downhole to better understand hydraulic fracture results and why stimulation and production processes don’t free the trapped oil at expected rates. Unfortunately, the streams of information received from these sensors are massive and hard to sort through.

A multidisciplinary team, including researchers at Texas A&M University and a faculty member from the Colorado School of Mines, has created an algorithm to clean up the subsurface data from fracturing efforts and offer a clear view of how and where these processes succeeded and failed in shale reservoir rocks.

“Our quantitative characterization retrieves more information about fracture geometries within a reservoir than a simple qualitative analysis would,” said Dr. Kan Wu, associate professor and Chevron Corporation Faculty Fellow in the Harold Vance Department of Petroleum Engineering. “We’ve tested our algorithm and already applied it in the field.”

The results were published on Nov. 11, 2021, in the Society of Petroleum Engineers’ SPE Production & Operation journal.

Traditional data interpretation methods, though incredibly helpful to engineers, are based strictly on qualitative information or probabilities based on patterns of information. In contrast, the algorithm was developed to gather quantitative data that’s countable, like temperature, pressure or rock deformation changes within a reservoir. It recognizes the outcomes that occurred to create the changes and accurately models how far and fast the fractures traveled, what directions they went and how big they became.

Low-frequency distributed acoustic sensing (DAS) data gathering has only been around for five years, so not all information received from the wells with fiber optics has been fully deciphered. Also, each well has its own range of characteristics due to the enormous variations of subsurface structures. This complexity is why Wu and her colleagues, fellow faculty member Dr. George Moridis, professor and Robert L. Whiting Chair, and Dr. Ge Jin, assistant professor of geophysics at Mines, needed a considerable amount of time to meticulously develop their algorithm.

First, the researchers tested the algorithm’s ability to clean the data and interpret simple streams from known fracture processes. That way they could backtrack or reverse the information to find the starting point of a fracture’s growth. As the algorithm was expanded to understand more complex information, they improved its ability to think in a forward manner and predict how new and complex fractures initiate and grow. 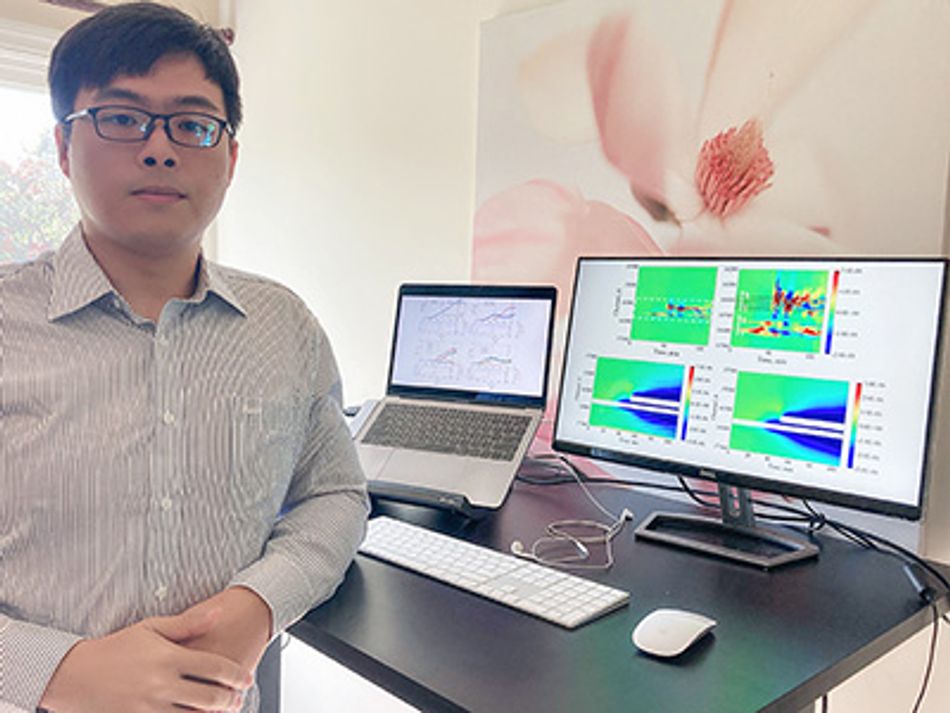 Dr. Yongzan Liu with some of the graphs and illustrations that show the algorithm’s capability to understand and depict fracturing efforts. | Image: Courtesy of Yongzan Liu

Wu is an expert in rock mechanics, Jin an expert in geophysics and DAS technology, and Moridis is an expert in advanced numerical methods and high-performance computing of coupled processes. Because of the multidisciplinary backgrounds of the project team, the algorithm possesses incredible flexibility to grow and adapt to the type of data it receives. For instance, Yongzan Liu, the graduate student on the project for over two years, is now a postdoc researcher using similar methods and modeling on fiber-optic data from hydrate-bearing sediments to monitor natural gas production for the Lawrence Berkeley National Laboratory.

Liu, Wu, Moridis and Jin are the first to develop this type of algorithm and publish results. The goal of their research is to eventually automate the algorithm so that feedback from fracturing events happens in near real time on a drill site. This way, engineers can quickly tailor fracture design efforts to each well’s particular composition.

“The industry needs this type of tool to understand fracture geometry and to monitor fracture propagation,” said Wu. “The more efficient it becomes, the better it will help optimize hydraulic fracture and completion designs and maximize well production.”

Future of Work: Beyond Bossware and Job-Killing Robots

To encourage a human-centered workplace, we must rethink AI-driven automation, bossware, labor taxes, and corporate R&D.

We're 20 years into the 21st century, and Industry 4.0 is well under way. Some of the initial concepts which seemed so revolutionary a few years ago are now well understood and adopted.