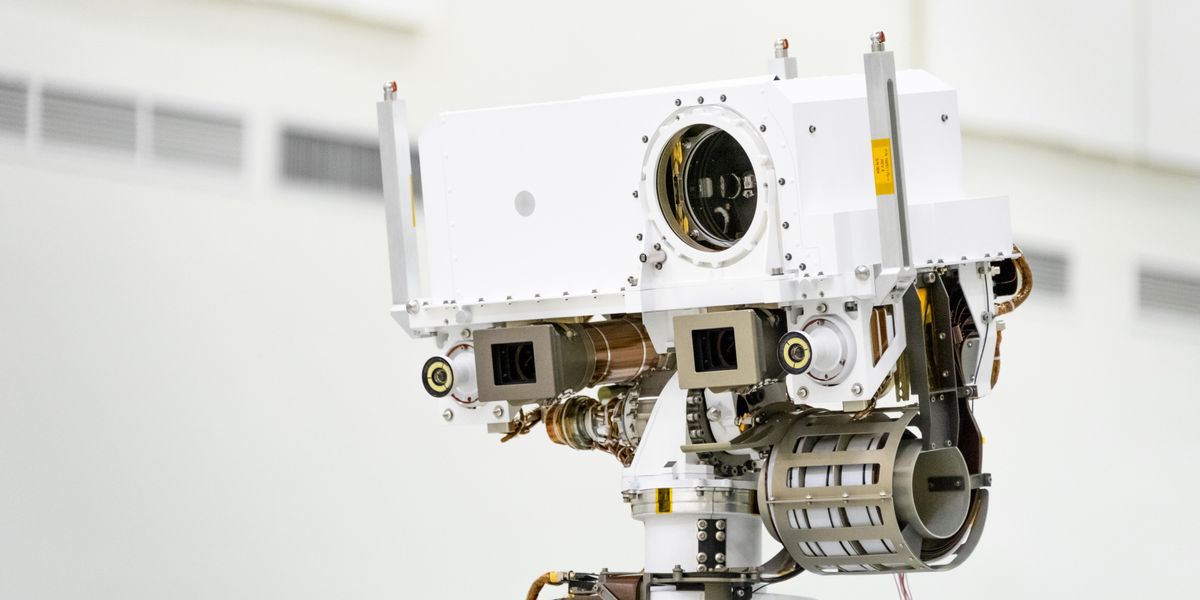 A close-up of the head of Perseverance Rover's remote sensing mast. The mast head contains the SuperCam instrument (its lens is in the large circular opening). In the gray boxes beneath mast head are the two Mastcam-Z imagers. On the exterior sides of those imagers are the rover's two navigation cameras. Image Credit: NASA/JPL-Caltech

A pair of zoomable cameras will help scientists and rover drivers with high-resolution color images.

When it launches this summer, NASA's Perseverance rover will have the most advanced pair of "eyes" ever sent to the Red Planet's surface: Its Mastcam-Z instrument packs a next-gen zoom capability that will help the mission make 3D imagery more easily. Rover operators, who carefully plan out each driving route and each movement of a rover's robotic arm, view these stereo images through 3D goggles to see the contours of the landscape.

Located on Perseverance's "head," Mastcam-Z (the Z stands for "zoom") is a more advanced version of Mastcam, which NASA's Curiosity Mars rover has relied on to produce gorgeous panoramas of the Martian landscape. But it does more than that, and so will Mastcam-Z: Along with producing images that enable the public to follow the rover's daily discoveries, the cameras provide key data to help engineers navigate and scientists choose interesting rocks to study. The difference is that Curiosity's Mastcam can't zoom. 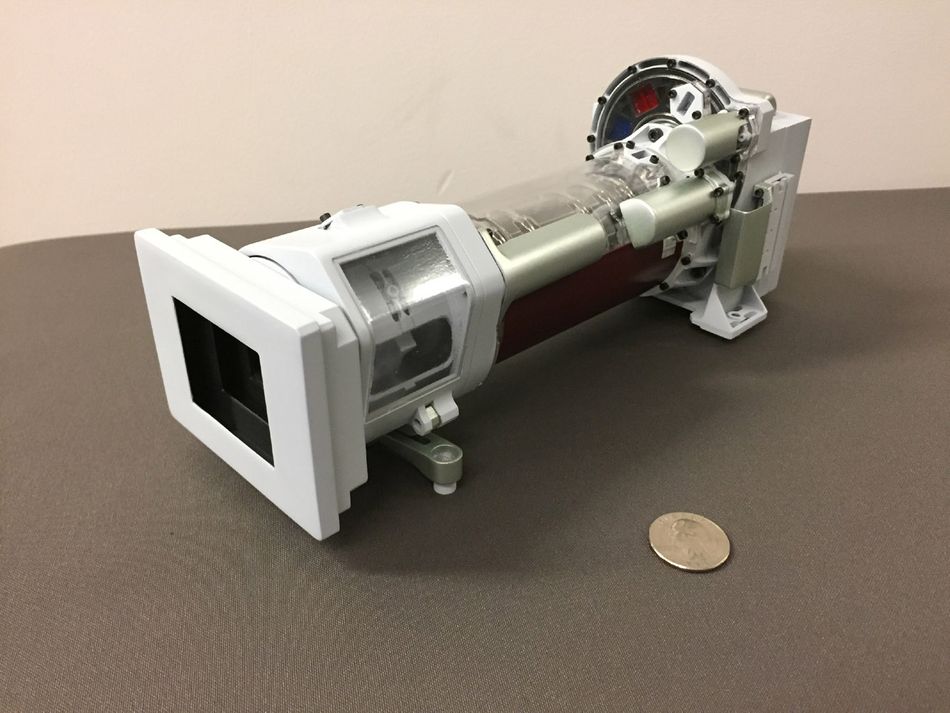 This image shows a 3-D printed model of Mastcam-Z, one of the science cameras on NASA's Perseverance Rover. Mastcam-Z will include a 3:1 zoom lens. Image Credit: NASA/JPL-Caltech

Zoom With a View

Curiosity's Mastcam was initially designed to be zoomable, but that proved difficult to achieve at the time in such a small instrument (Curiosity launched in 2011).

"The original plan was for Curiosity to have a zoom camera that could go out to an extreme wide angle like a spaghetti western view," said Jim Bell of Arizona State University, Mastcam-Z's principal investigator and Mastcam's deputy principal investigator. "It would have been an amazing panoramic perspective but proved really hard to build at the time."

Instead, Curiosity's Mastcam has one telephoto lens and one wide-angle lens. Images are taken through each and can be combined to produce stereo views. But the wide-angle lens takes in far more of the landscape in a single shot than the telescopic one; it requires up to nine telescopic images to match.

Perseverance's Mastcam-Z simplifies matters, zooming both lenses until they match and can be used to make a single 3D image. This is both easier and requires sending fewer images - and less data - to Earth.

Eyes of a Scientist

Besides providing a stereo view to help drivers choose the safest path, Mastcam-Z will help geologists choose scientific targets and better understand the landscape that rock samples are found in: Did they fall from a neighboring cliffside? Are they from an ancient stream?

Mastcam-Z will provide "superhuman vision," viewing the landscape in a variety of colors (wavelengths of light), including some that can't be detected by the human eye. Scanning the terrain in the ultraviolet or infrared, for example, could reveal metal meteorites dotting the surface or color variations indicating compositions that warrant more detailed analysis by other instruments.

Mastcam-Z isn't a spectrometer, which is to say, an instrument that uses light to do detailed scientific analysis. "But it can provide mineral clues that other instruments will follow up on," Bell said.

The camera system can also observe the Sun and sky, watching for transits of Mars' moons across the Sun and measuring how dust storms and cloud formations change over the seasons. 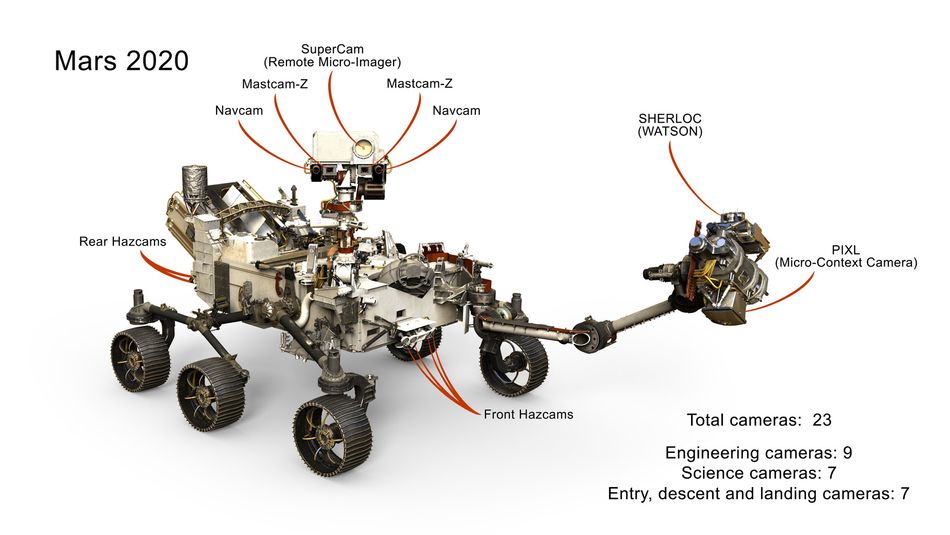 This image presents a selection of the 23 cameras on NASA's Perseverance Rover. Many are improved versions of the cameras on the Curiosity rover, with a few new additions as well. Image Credit: NASA/JPL-Caltech

Mars for the People

Bell's first experience with Mars pictures was as an 11-year-old, watching images on the nightly TV news sent back by the Viking landers in 1976. He was later involved in the Mars Pathfinder mission and went on to lead the Pancam systems on the Spirit and Opportunity rovers, which inspired a new generation of Mars fanatics, including future scientists and engineers.

The vistas that Perseverance will send back from its landing site, Jezero Crater, will be just as significant for those who work on the mission and everyone who's following along.

That's why there are plans to share Mastcam-Z images and mosaics made by the amateur community on a public website. "It's important that the public have a sense of ownership," Bell said. "The Mastcam-Z images belong to all of us."

Perseverance is a robotic scientist weighing about 2,260 pounds (1,025 kilograms). The rover's astrobiology mission will search for signs of past microbial life. It will characterize the planet's climate and geology, collect samples for future return to Earth, and pave the way for human exploration of the Red Planet. No matter what day Perseverance launches during its July 17-Aug. 5 launch period, it will land at Mars' Jezero Crater on Feb. 18, 2021.