Our solar system features eight planets, seen in this artist’s diagram. This representation is intentionally fanciful, as the planets are depicted far closer together than they really are. Credit: NASA/JPL.

Could the same computer algorithms that teach autonomous cars to drive safely help identify nearby asteroids or discover life in the universe? NASA scientists are trying to figure that out by partnering with pioneers in artificial intelligence (AI) — companies such as Intel, IBM and Google — to apply advanced computer algorithms to problems in space science.

Machine learning is a type of AI. It describes the most widely used algorithms and other tools that allow computers to learn from data in order to make predictions and categorize objects much faster and more accurately than a human being can. Consequently, machine learning is widely used to help technology companies recognize faces in photos or predict what movies people would enjoy. But some scientists see applications far beyond Earth.

Giada Arney, an astrobiologist at NASA’s Goddard Space Flight Center in Greenbelt, Maryland, hopes machine learning can help her and her colleagues find a needle of life in a haystack of data that will be collected by future telescopes and observatories such as NASA’s James Webb Space Telescope.

“These technologies are very important, especially for big data sets and especially in the exoplanet field,” Arney says. “Because the data we’re going to get from future observations is going to be sparse and noisy. It’s going to be really hard to understand. So using these kinds of tools has so much potential to help us.”

To help scientists like Arney build cutting-edge research tools, NASA’s Frontier Development Lab, or FDL, brings together technology and space innovators for eight weeks every summer to brainstorm and develop computer code. The four-year-old program is a partnership between the SETI Institute and NASA’s Ames Research Center, both based in Silicon Valley where startup-hatching incubators that bring talented people together to accelerate the development of breakthrough technologies are abundant.

“FDL feels like some really good musicians with different instruments getting together for a jam session in the garage, finding something really cool, and saying, 'Hey we’ve got a band here,’” says Shawn Domagal-Goldman, a NASA Goddard astrobiologist who, together with Arney, mentored an FDL team in 2018. Their team developed a machine learning technique for scientists who aim to study the atmospheres of exoplanets, or planets beyond our solar system.

These Goddard scientists hope to one day use advanced machine learning techniques to quickly interpret data revealing the chemistry of exoplanets based on the wavelengths of light emitted or absorbed by molecules in their atmospheres. Since thousands of exoplanets have been discovered so far, making quick decisions about which ones have the most promising chemistry associated with habitability could help winnow down the candidates to only a few that deserve further, and costly, investigation.

An animated representation of all the multi-planet systems discovered in the Milky Way galaxy by NASA’s Kepler Space Telescope as of Oct. 30, 2018. The systems are shown together at the same scale as our Solar System (dashed lines). Credits: Ethan Kruse/NASA Goddard

To this end, the FDL team Arney and Domagal-Goldman helped advise, with technical support from Google Cloud, deployed a technique known as a “neural network.” This technology can solve super complicated problems in a process analogous to the workings of the brain. In a neural network, billions of “neurons,” which are nerve cells in the brain that help us form memories and make decisions, connect with billions of others to process and transmit information. University of Oxford computer science graduate student, Adam Cobb, along with Michael D. Himes, a physics graduate student from the University of Central Florida, led a study to test the capability of a “Bayesian” neural network against a widely used machine learning technique known as a “random forest.” Another researcher team not associated with FDL had already used this latter method to analyze the atmosphere of WASP-12b, an exoplanet discovered in 2008, based on mountains of data collected by NASA’s Hubble Space Telescope. Could the Bayesian neural network do better, the team wondered?

“We found out right away that the neural network had better accuracy than random forest in identifying the abundance of various molecules in WASP-12b’s atmosphere,” Cobb says.

But besides better accuracy, the Bayesian technique offered something equally as critical: it could tell the scientists how certain it was about its prediction. “In places where the data weren’t good enough to give a really accurate result, this model was better at knowing that it wasn’t sure of the answer, which is really important if we are to trust these predictions,” Domagal-Goldman says.

While the technique developed by this team is still in development, other FDL technologies have already been adopted in the real world. By 2017, FDL participants developed a machine learning program that could quickly create 3D models of nearby asteroids, accurately estimating their shapes, sizes, and spin rates. This information is critical to NASA’s efforts to detect and deflect threatening asteroids from Earth.

Traditionally, astronomers use simple computer software to develop 3D models. The software analyzes many radar measurements of a moving asteroid and then helps scientists infer its physical properties based on changes in the radar signal.

“An adept astronomer with standard compute resources, could shape a single asteroid in one to three months,” says Bill Diamond, SETI’s president and chief executive officer. “So the question for the research team was: Can we speed it up?” 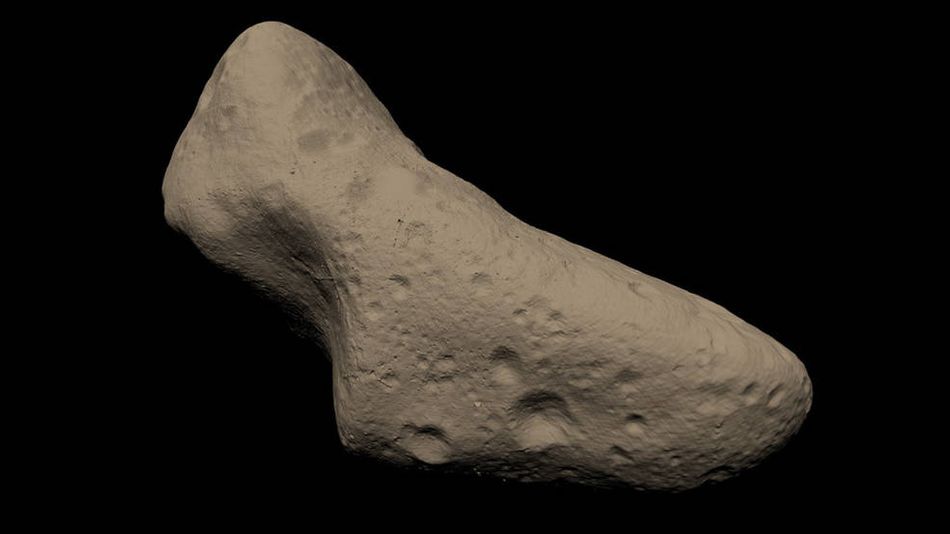 The answer was yes. The team, which included students from France, South Africa and the United States, plus mentors from academia and from technology company Nvidia, developed an algorithm that could render an asteroid in as little as four days. Today, the technique is used by astronomers at the Arecibo Observatory in Puerto Rico to do nearly real-time shape modeling of asteroids.

The asteroid modeling, along with exoplanetary atmosphere analysis, are a couple of FDL examples that show the promise in applying sophisticated algorithms to the volumes of data collected by NASA’s more than 100 missions.

As NASA heliophysicist Madhulika (Lika) Guhathakurta notes, the space agency gathers about 2 gigabytes of data (and growing) every 15 seconds from its fleet of spacecraft. “But we analyze only a fraction of that data, because we have limited people, time and resources. That is why we need to utilize these tools more,” she says. 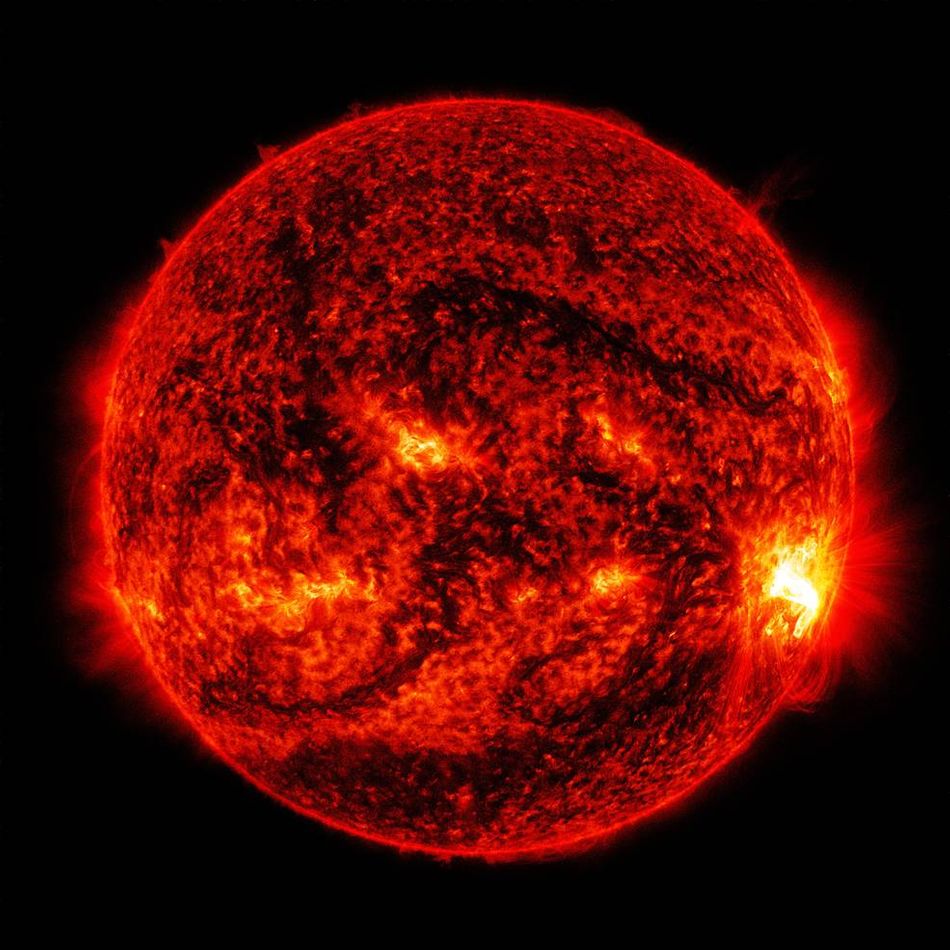 An image of the Sun captured by NASA's Solar Dynamics Observatory on Oct. 27, 2014. It shows a large active region (bottom right) erupting in a flare. Credits: NASA/GSFC/SDO

A lead on missions focused on understanding and predicting the Sun’s effects on Earth, technology and astronauts in space, Guhathakurta has been with FDL for the last three years and has been a key architect in shaping this program. She supported a team in 2018 that resolved a problem with a malfunctioning sensor on NASA’s Solar Dynamics Observatory (SDO), a spacecraft that studies the Sun's influence on Earth and near-Earth space.

Back in 2014, just four years after the mission launched, a sensor stopped returning data related to extreme ultraviolet (EUV) radiation levels — information that correlates with a ballooning of the Earth's outer atmosphere and thus affects the longevity of satellites, including the International Space Station. So computer science doctoral students from Stanford University and University of Amsterdam, among others, with mentors from organizations including IBM, Lockheed Martin, and SETI, developed a technique that could, essentially, fill in the missing data from the broken sensor. Their computer program could do this by analyzing data from other SDO instruments, along with old data collected by the broken sensor during the four years it was working, to infer what EUV radiation levels that sensor would have detected based on what the other SDO instruments were observing at any given time. “We generated, basically, a virtual sensor,” Guhathakurta says.

The potential of this type of this instrument is not lost on anyone. SETI head, Diamond, imagines a future where these virtual tools are incorporated on spacecraft, a practice that would allow for lighter, less complex and therefore cheaper missions. Domagal-Goldman and Arney envisage future exoplanet missions where AI technologies embedded on spacecraft are smart enough to make real-time science decisions, saving the many hours necessary to communicate with scientists on Earth.

“AI methods will help us free up processing power from our own brains by doing a lot of the initial legwork on difficult tasks,” Arney says. “But these methods won’t replace humans any time soon, because we’ll still need to check the results.”

It's the first time machine learning has been used to find previously unknown craters on the Red Planet.

Whether the idiosyncratic HAL 9000 in Odyssey in Space, the discreetly acting “computer” of the Enterprise or the soberly sarcastic TARS and CASE in Interstellar – in science fiction, the exploration of space has always been accompanied by artificial intelligence.

Using an online tool to label Martian terrain types, you can train an artificial intelligence algorithm that could improve the way engineers guide the Curiosity rover.