Deep Space Station 56, or DSS-56, is a powerful 34-meter-wide (112-foot-wide) antenna that was added to the Deep Space Network's Madrid Deep Space Communications Complex in Spain in early 2021. Credit: NASA/JPL-Caltech

A powerful new antenna has been added to the NASA Space Communications and Navigation’s Deep Space Network (DSN), which connects us to the space robots exploring our solar system. Called Deep Space Station 56, or DSS-56, the dish is now online and ready to communicate with a variety of missions, including NASA’s Perseverance rover when it lands on the Red Planet next month.

The new 34-meter-wide (112-foot-wide) dish has been under construction at the Madrid Deep Space Communications Complex in Spain since 2017. Existing antennas are limited in the frequency bands they can receive and transmit, often restricting them to communicating only with specific spacecraft. DSS-56 is the first to use the Deep Space Network’s full range of communication frequencies as soon as it went online. This means DSS-56 is an “all-in-one” antenna that can communicate with all the missions that the DSN supports and can be used as a backup for any of the Madrid complex’s other antennas.

With the addition of DSS-56 and other 34-meter antennas to all three DSN complexes around the world, the network is preparing to play a critical role in ensuring communication and navigation support for upcoming Moon and Mars missions and the crewed Artemis missions. 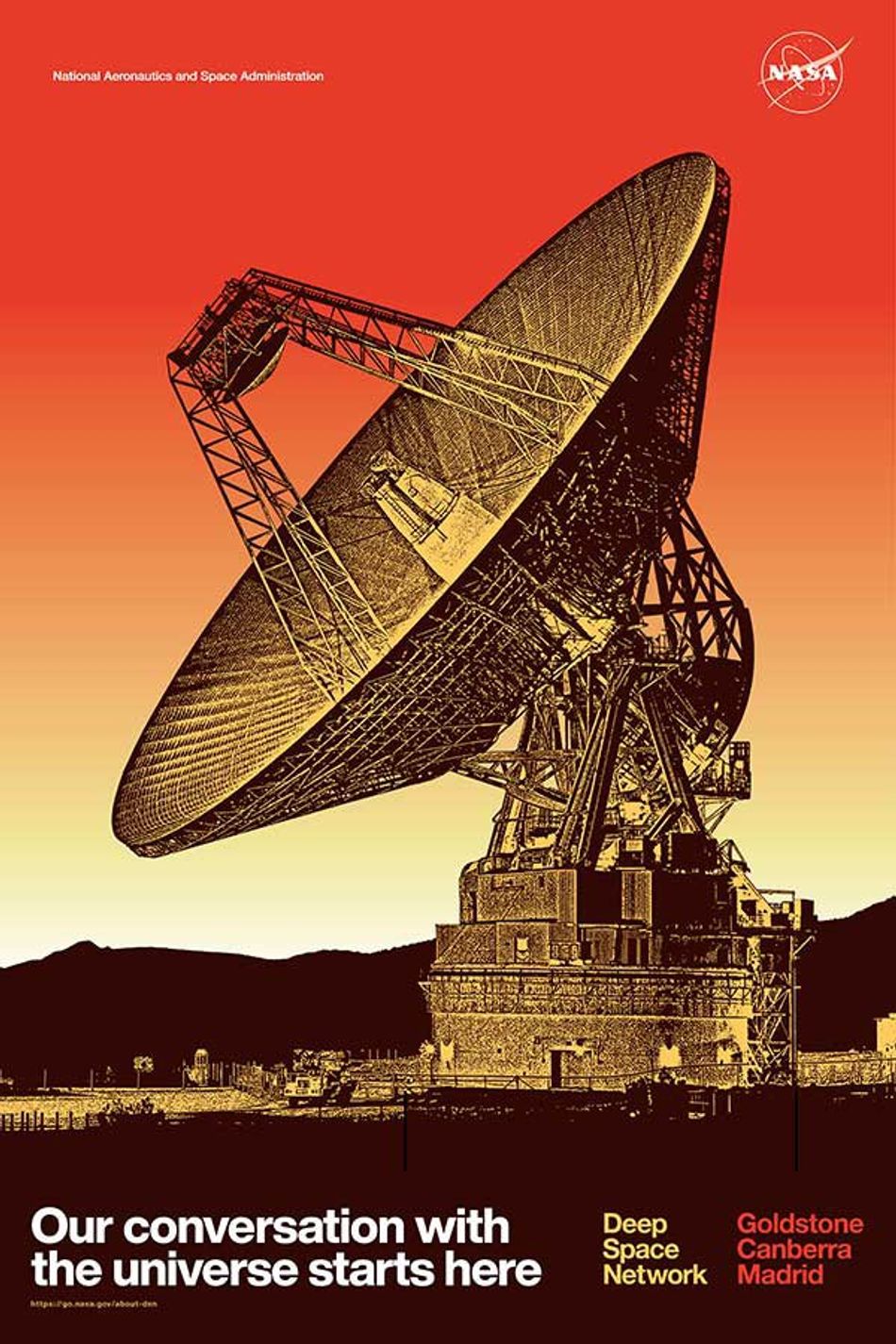 ﻿Three eye-catching posters featuring the larger 70-meter (230-feet) antennas located at the three Deep Space Network complexes around the world are available for download here. Credit: NASA/JPL-Caltech  “The Deep Space Network is vital to so much of what we do – and to what we plan to do – throughout the solar system. It’s what connects us here on Earth to our distant robotic explorers, and, with the improvements that we’re making to the network, it connects us to the future as well, expanding our capabilities as we prepare human missions for the Moon and beyond,” said Thomas Zurbuchen, associate administrator of the Science Mission Directorate at NASA’s headquarters in Washington. “This latest antenna was built as an international partnership and will ultimately benefit all of humanity as we continue to explore deep space.”

With DSS-56’s increased flexibility came a more complex start-up phase, which included testing and calibration of a larger suite of systems, before the antenna could go online. On Friday, Jan. 22, the international partners who oversaw the antenna’s construction attended a virtual ribbon-cutting event to officially mark the occasion – an event that had been delayed due to historic snowfall blanketing much of Spain.

“After the lengthy process of commissioning, the DSN’s most capable 34-meter antenna is now talking with our spacecraft,” said Bradford Arnold, DSN project manager at NASA’s Jet Propulsion Laboratory in Southern California. “Even though pandemic restrictions and the recent weather conditions in Spain have been significant challenges, the staff in Madrid persevered, and I am proud to welcome DSS-56 to the global DSN family.”

More About the Deep Space Network

In addition to Spain, the Deep Space Network has ground stations in California (Goldstone) and Australia (Canberra). This configuration allows mission controllers to communicate with spacecraft throughout the solar system at all times during Earth’s rotation.

The forerunner to the DSN was established in January 1958 when JPL was contracted by the U.S. Army to deploy portable radio tracking stations in California, Nigeria, and Singapore to receive telemetry of the first successful U.S. satellite, Explorer 1. Shortly after JPL was transferred to NASA on Dec. 3, 1958, the newly-formed U.S. civilian space program established the Deep Space Network to communicate with all deep space missions. It has been in continuous operation since 1963 and remains the backbone of deep space communications for NASA and international missions, supporting historic events such as the Apollo Moon landings and checking in on our interstellar explorers, Voyager 1 and 2.

The Deep Space Network is managed by JPL for SCaN, which is located at NASA’s headquarters within the Human Exploration and Operations Mission Directorate. The Madrid station is managed on NASA’s behalf by Spain’s national research organization, Instituto Nacional de Técnica Aeroespacial (National Institute of Aerospace Technology).

Chip-sized satellites, or ChipSats, are designed to work together in a swarm to perform tasks that, nowadays, only big, costly systems can do.