The full-scale engineering model of NASA's Perseverance rover has put some dirt on its wheels at NASA's Jet Propulsion Laboratory in Southern California. Credit: NASA/JPL-Caltech

As NASA's Mars rover Perseverance hurtles through space toward the Red Planet, the six-wheeler's twin is ready to roll here on Earth.

A full-scale engineering version of the Mars 2020 Perseverance rover - outfitted with wheels, cameras, and powerful computers to help it drive autonomously - has just moved into its garage home at NASA's Jet Propulsion Laboratory in Southern California. This rover model passed its first driving test in a relatively tame warehouselike assembly room at JPL on Sept. 1. Engineers expect to take it out next week into the Mars Yard, where a field of red dirt studded with rocks and other obstacles simulates the Red Planet's surface.

"Perseverance's mobility team can't wait to finally drive our test rover outside," said Anais Zarifian, the mobility test bed engineer at JPL. "This is the test robot that comes closest to simulating the actual mission operations Perseverance will experience on Mars - with wheels, eyes, and brains all together - so this rover is going to be especially fun to work with."

Wait, Why Does Perseverance Need a Twin?

Perseverance isn't flying to Mars with a mechanic. To avoid as many unexpected issues as possible after the rover lands on Feb. 18, 2021, the team needs this Earth-bound vehicle system test bed (VSTB) rover to gauge how hardware and software will perform before they transmit commands up to Perseverance on Mars. This rover model will be particularly useful for completing a full set of software tests so the team can send up patches while Perseverance is en route to Mars or after it has landed. 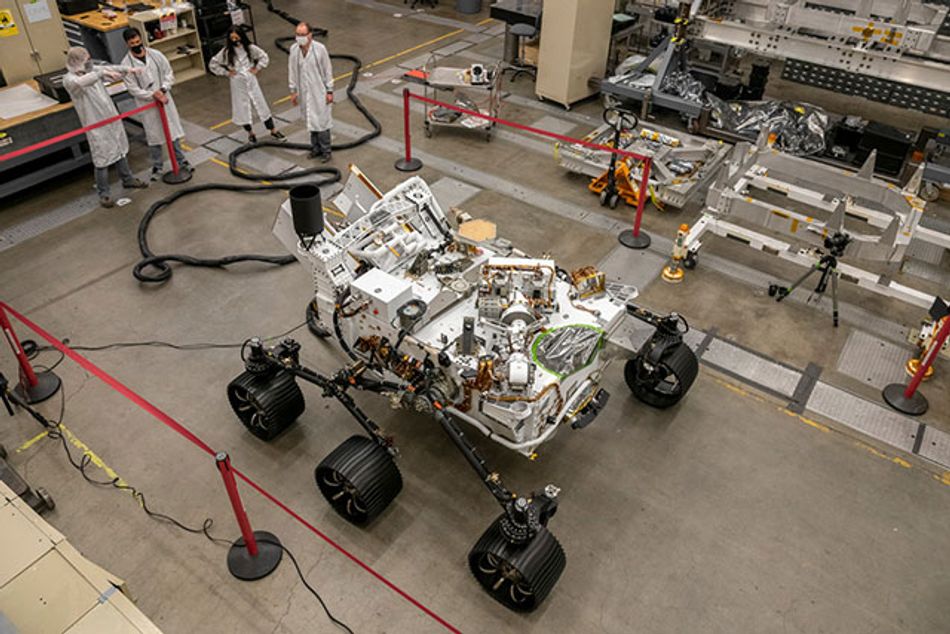 And just like Perseverance has a fitting name - one that captures the hard work of getting the rover on its way to Mars amid a pandemic - its twin has a name, too: OPTIMISM. While OPTIMISM is an acronym for Operational Perseverance Twin for Integration of Mechanisms and Instruments Sent to Mars, the name is also a nod to the mantra of the team that spent two years planning and assembling it.

"The Mars 2020 Perseverance test bed team's motto is 'No optimism allowed,'" said Matt Stumbo, the lead for the VSTB rover on the test bed team. "So we named the test rover OPTIMISM to remind us of the work we have to do to fully test the system. Our job is to find problems, not just hope activities will work. As we work through the issues with OPTIMISM, we gain confidence in Perseverance's capabilities and confidence in our ability to operate on Mars."

OPTIMISM is nearly identical to Perseverance: It is the same size, has the same mobility system and top driving speed (0.094 mph, or 0.15 kph), and features the same distinctive "head," known as the remote sensing mast. After a second phase of building at the beginning of the new year, it will have the full suite of science instruments, cameras, and computer "brains" Perseverance has, plus its unique system for collecting rock and soil samples.

But since OPTIMISM lives at JPL, it also features some Earthly differences. For one thing, while Perseverance gets its power from a multi-mission radioisotope thermoelectric generator (a kind of nuclear battery that has reliably powered space missions since the 1960s), OPTIMISM features an umbilical cord that can be plugged in for electrical power. That cord also provides an ethernet connection, allowing the mission team to send commands to and receive engineering data back from OPTIMISM without installing the radios Perseverance uses for communication. And whereas Perseverance comes with a heating system to keep it warm in the frigid environment of Mars, OPTIMISM relies on a cooling system for operating in hot Southern California summers. 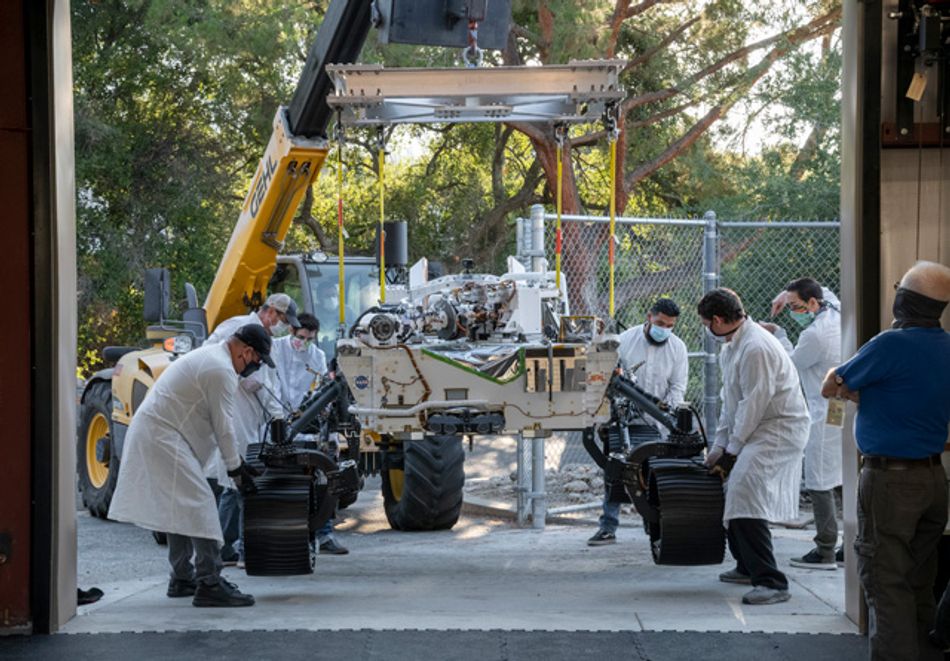 echnicians move an engineering version of the Perseverance Mars rover into to its new home in the Mars Yard, part of NASA's Jet Propulsion Laboratory in Southern California. Credit: NASA/JPL-Caltech

Welcome to the Family

OPTIMISM isn't JPL's only VSTB rover. NASA's Curiosity Mars rover, which has been exploring the Red Planet since it landed in 2012, has a twin named MAGGIE (Mars Automated Giant Gizmo for Integrated Engineering). MAGGIE has been helping the Curiosity team particularly with strategies for driving across challenging terrain and drilling rocks.

OPTIMISM and MAGGIE will live side-by-side in the Mars Yard, giving JPL engineers a two-car garage for the first time.

"Missions that are operating require high-fidelity replicas of their systems for testing," Stumbo said. "The Curiosity mission has learned lessons from MAGGIE that were impossible to learn any other way. Now that we have OPTIMISM, the Perseverance mission is well equipped to learn what they need to succeed on Mars." 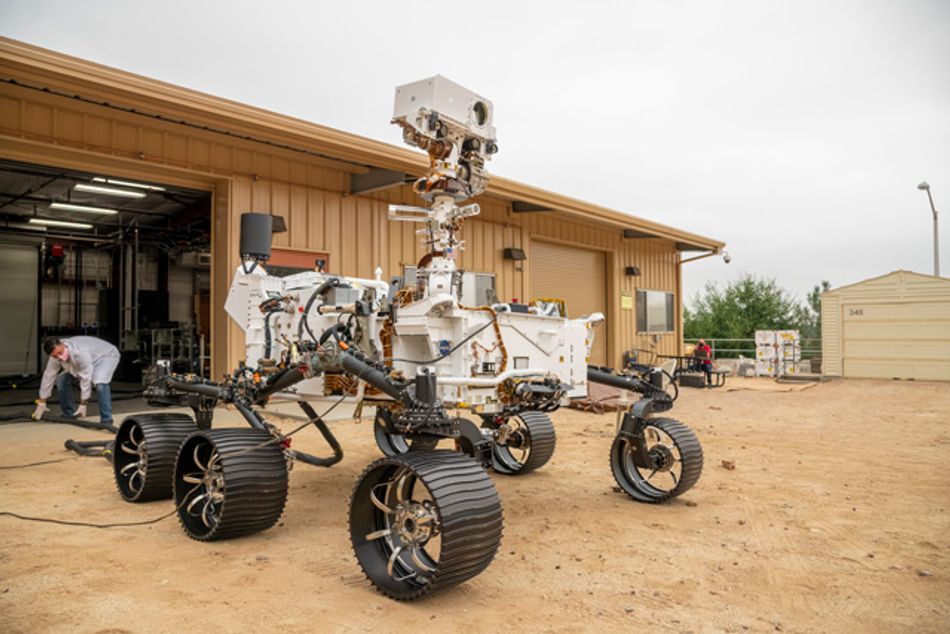 The full-scale engineering model of NASA's Perseverance rover has put some dirt on its wheels at NASA's Jet Propulsion Laboratory in Southern California. Credit: NASA/JPL-Caltech

The Perseverance rover's astrobiology mission will search for signs of ancient microbial life. It will also characterize the planet's climate and geology, pave the way for human exploration of the Red Planet, and be the first planetary mission to collect and cache Martian rock and regolith (broken rock and dust). Subsequent missions, currently under consideration by NASA in cooperation with the European Space Agency, would send spacecraft to Mars to collect these cached samples from the surface and return them to Earth for in-depth analysis.

How two new technologies will help Perseverance, NASA’s most sophisticated rover yet, touch down onto the surface of Mars this month.