The aim was to deviate from the fixed morphology robots and experiment with robot designs that can adapt to their environment by virtue of their capability to change shape. Multiple types of variable morphology robot designs are currently in consideration, but one of the promising designs is being showcased here. The aim of the project is to design a robot that adapts to its environment and is capable of navigating on multiple types of terrain, but at the same time maintains simplicity in design and manufacturing. This in turn also will lead to low-cost robots. The long-term goal of the project is to create a low-cost (to the extent that it is eventually disposable) robot capable of navigating multiple terrains by virtue of its capability to adapt to its environment by changing shape.

This particular design can cover water bodies (by floating), rocky surfaces, sand-filled areas, and rough forest terrains. The potential applications can include exploration into new and potentially dangerous areas.

The default shape of the robot is cylindrical with two wheels/floaters that can rotate and navigate over water bodies or plane surfaces. Once the floaters are expanded the compute core is lifted off the ground giving adequate ground clearance along with spiked wheels to navigate much more challenging terrain. The robot consists of three major logical segments - The computing swing core, the actuators, the expandable floaters. The computing core consists of the controller, batteries, and actuator controls along with a camera module. The computing core is fixed inside a cylindrical core with a transparent central section for the camera module. The entire cylindrical core is freely suspended and is passive. It stabilizes due to gravity at low speeds and once the robot is stationary. Hence the term computing swing core. 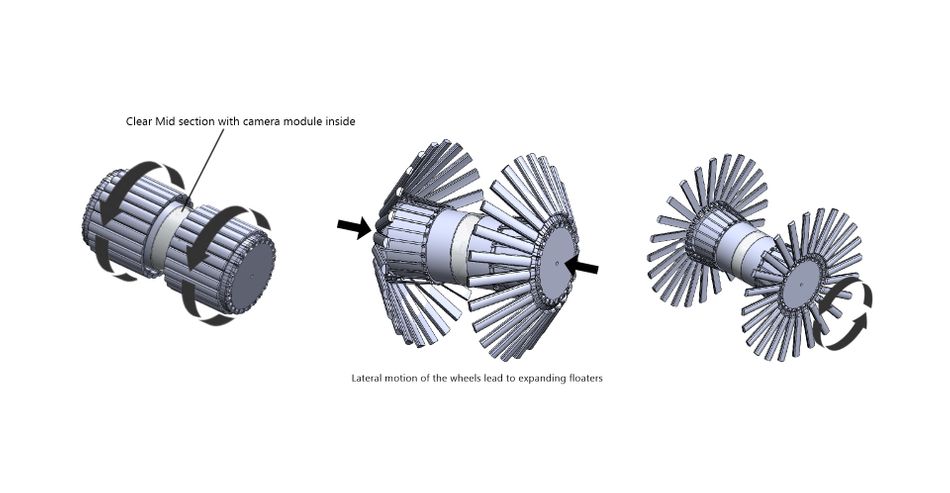 The actuator terminals pass through a slip ring to allow continuous rotations relative to the cylindrical compute core. The actuators are mounted on a mechanical structure that is capable of retracting the actuators laterally. This lateral motion causes the floaters to expand and contract. Under normal conditions, the floaters are compact and close to the robot body. The current prototype design consists of three actuators (the third actuator for the expansion of the floaters) with a passive central core with a camera. The future iterations are aimed at making the entire robot much smaller in size to a micro-scale with other stabilization options for the central core. Other variations in the design under consideration include experimenting with materials for floaters that are capable of storing energy and releasing it when required.