Image by PublicDomainPictures from Pixabay

Scientists at the National Institute of Standards and Technology (NIST) and the Massachusetts Institute of Technology (MIT) have demonstrated a potentially new way to make switches inside a computer’s processing chips, enabling them to use less energy and radiate less heat.

The team has developed a practical technique for controlling magnons, which are essentially waves that travel through magnetic materials and can carry information. To use magnons for information processing requires a switching mechanism that can control the transmission of a magnon signal through the device.

While other labs have created systems that carry and control magnons, the team’s approach brings two important firsts: Its elements can be built on silicon rather than exotic and expensive substrates, as other approaches have demanded. It also operates efficiently at room temperature, rather than requiring refrigeration. For these and other reasons, this new approach might be more readily employed by computer manufacturers. 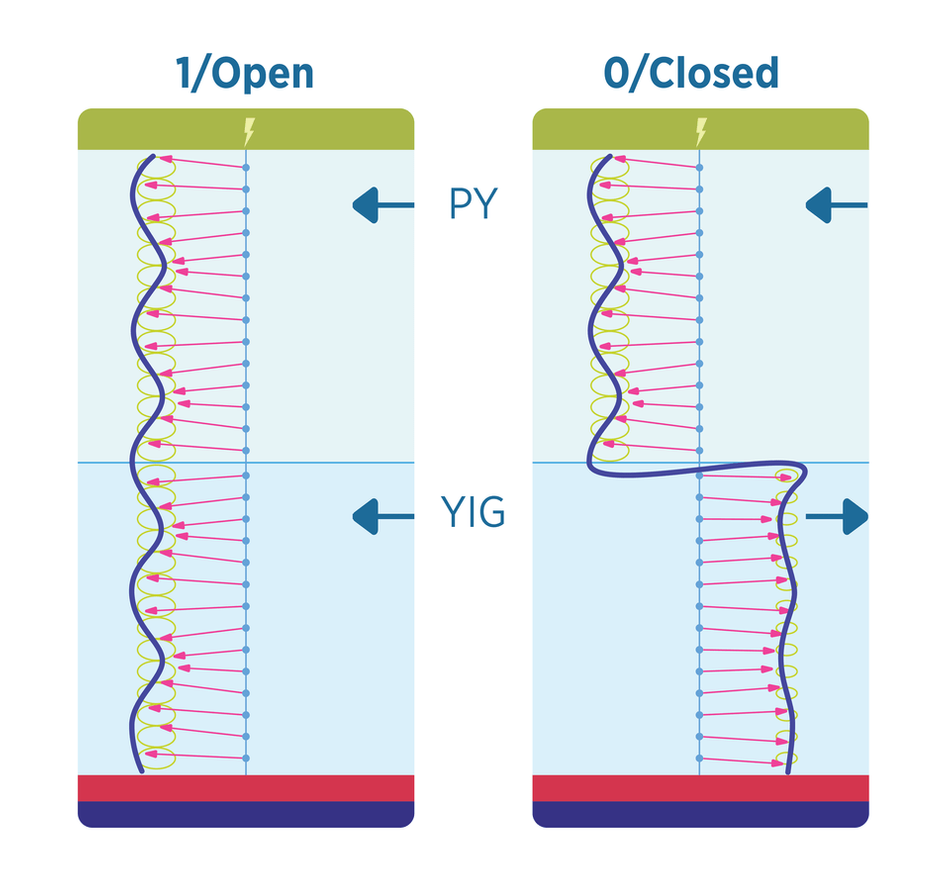 This artist’s conception shows the difference between a magnon’s “open” and “closed” states. Exciting the magnetic spin (red arrow) of the top electron sends a wave of spin changes traveling downward through the chain, creating a voltage that can be read out at the bottom. At left, the net direction of the spins in the materials YIG and Py (two thick blue layers) point in the same direction (large blue arrows), and the waves remain large through the electron chain, representing an open state. But at right, the net spin in the YIG and Py point in opposite directions, reducing the amplitude of the waves in the YIG and indicating a closed state.  Credit: N.Hanacek/NIST

“This is a building block that could pave the way to a new generation of highly efficient computer technology,” said team member Patrick Quarterman, a physicist at the NIST Center for Neutron Research (NCNR). “Other groups have created and controlled magnons in materials that do not integrate well with computer chips, while ours is built on silicon. It’s much more viable for industry.”

Magnons, also called spin waves, would harness the property of electron spin to transfer information. One reason computer chips get so hot is that in a conventional circuit, electrons travel from one place to another, and their movement generates heat. A magnon, however, moves through a long string of electrons, which themselves do not need to travel. Instead, each electron’s spin direction — which is a bit like an arrow stretching through the axis of a spinning top — magnetically influences the spin direction of the next electron in line. Tweaking the spin of the first electron sends a wave of spin changes propagating down the string. Because the electrons themselves would not move, far less heat would result.

Because the electron string stretches from one place to another, the magnon can carry information as it travels down the string. In chips based on magnon technology, larger and smaller wave heights (amplitudes) could represent ones and zeros. And because the wave height can change gradually, a magnon could represent values between one and zero, giving it more capabilities than a conventional digital switch has.

“This is a building block that could pave the way to a new generation of highly efficient computer technology.” —NCNR physicist Patrick Quarterman

While these advantages have made magnon-based information processing a tantalizing idea in theory, up until now most of the successful structures have been built within multiple layers of thin films that sit atop a base of gadolinium gallium garnet, rather than atop the silicon that commercial chips are made from. This “GGG” material would be prohibitively expensive to mass produce.

“It’s a fun physics playground that demonstrates the basic principles,” Quarterman said, “but it’s not practical for industrial-scale production.”

However, Yabin Fan and his colleagues at MIT used a creative engineering approach to layer the thin films atop a base of silicon. Their goal was to build their system on top of the material that the computer industry has been long accustomed to working with, thereby allowing magnons to interface with conventional computer technology.

Initially, their multilayered creation did not behave as expected, but scientists at the NCNR used a technique called neutron reflectometry to explore the magnetic behavior within the device. The neutrons revealed an unexpected but advantageous interaction between two of the thin film layers: Depending on the amount of magnetic field applied, the materials order themselves in different ways that could represent a switch’s “on” or “off” state, as well as positions between on and off — making it akin to a valve.

“As you lower the magnetic field, the direction switches,” said Fan, a postdoctoral associate in MIT’s electrical engineering department. “The data is very clear and showed us what was happening at different depths. There’s a very strong coupling between the layers.”

The magnon switch could find use in devices that do another sort of calculating as well. Conventional digital switches can only exist in either on or off states, but because the amplitude of the spin wave can change gradually from small to large, it is possible that magnons could be used in analog computing applications, where the switch has values lying between 0 and 1.

“That’s why we consider this to be more like a valve,” Quarterman said. “You can open or close it a bit at a time.”

ETH researchers have built an ultrafast chip that can speed up data transmission in fibre optic networks. The chip combines several innovations at the same time and, given the growing demand for streaming and online services, represents a significant development.