The integrated circuit (chip) measures only 2.2 millimetres by 1.1 millimetres and allows, among other things, insights into pain and inflammation. (Photo: Integrated Systems Laboratory)

Researchers have developed a system that allows them to optically stimulate individual nerve fibres in living mice. Through this process, they have demonstrated that the nervous system has a direct influence on the immune system.

Over the last ten years, a new method has literally shed more light on the brain. “Optogenetics” allows scientists to deliberately stimulate genetically modified nerve cells and thoroughly investigate their functioning within the complex network inside the skull. This technique represents a revolution in neuroscience, but to date, it could only be applied to study the central nervous system, but not the peripheral nervous system.

Now, a team of electrical engineers led by Qiuting Huang, a professor at the Institute for Integrated Systems at ETH Zurich, together with researchers from EPFL in Lausanne and Harvard Medical School, have developed a system that connects implantable light emitting diodes (LED) with a tiny device on the subject’s head which can be controlled from a tablet via Bluetooth. They stimulated, with great precision, nerve fibres in the bodies of freely moving mice, as the scientists report in the scientific journal Nature Biotechnology.

“Our goal was to develop an integrated platform that was as small as possible. Together, the chip, the battery and the antenna for wireless signal transmission weigh less than one gram – and come in at less than one cubic centimetre in size,” says Huang. While the chip technology enables high integration density of electronic circuits, there are limits to miniaturisation, particularly with batteries; the smaller the volume, the greater the energy density. This, in turn, increases the risk that batteries might ignite. “Therefore, we use components that use as little energy as possible,” says Huang.

They originally intended to develop the platform for a project that would measure oxygen saturation and blood pressure, but right from the outset of the design phase, they endeavoured to ensure the widest possible application for the chip. “Because our system is programmable, we were able to take the electronic circuits that we had been intending to use to measure oxygen saturation in blood and re-purpose them to control the implanted light emitting diodes,” says Philipp Schönle. As part of his doctoral thesis, Schönle contributed greatly to development of the new neurotechnology in Huang’s group.

Made for each other 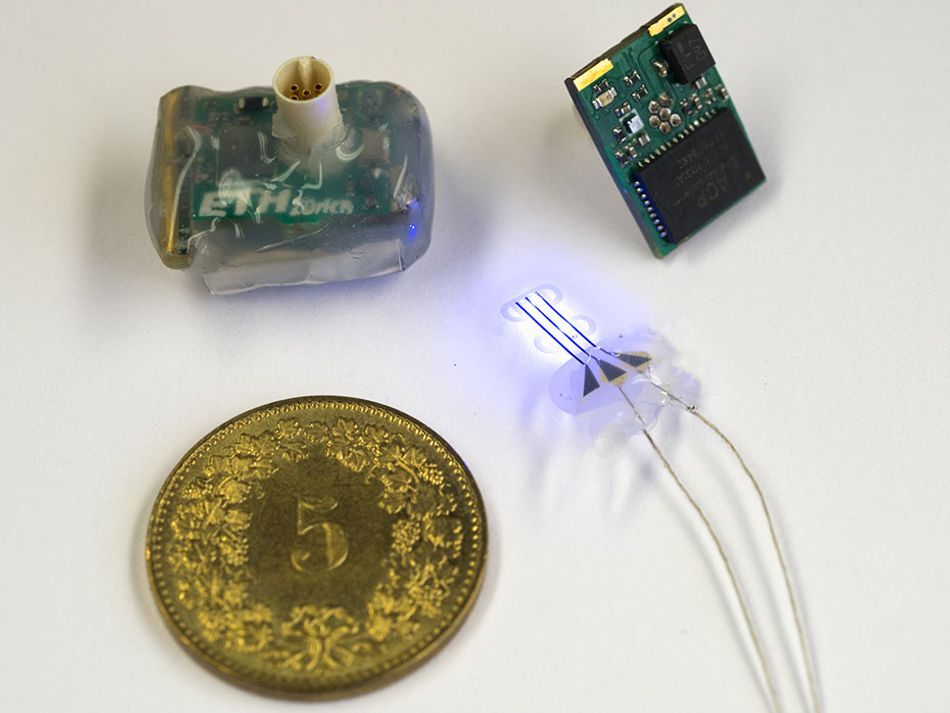 The group has been collaborating with Stéphanie Lacour’s group at EPFL for five years. “Our sophisticated electronics and their soft bioelectronic sensors were made for each other,” says Huang. Advances in material sciences and electronics build on each other – and interconnect with each other. “Together, we have developed an approach that allows us to stimulate a specific nerve fibre in the body of the mouse at precise points in time,” says Schönle.

At Harvard Medical School in Boston, a research group led by Clifford Woolf wrapped the implants around the sciatic nerve. Without damaging the nerve, over several days, they managed to repeatedly use blue light flashes to activate specific nerve cells – the “nociceptors”, which specialise in the transmission of pain signals. To their surprise, the researchers discovered that repeated optical stimulation of these nociceptors produced a slight reddening in one of the mouse’s hind paws, a clear sign of inflammation.

Scientists had previously assumed that pain and inflammation were two different processes that arose independently of one another. “But now we have been able to prove conclusively that the neurons responsible for pain sensations can also generate an inflammatory immune response,” says Woolf. As the researchers explain in their article, these results may potentially point the way to new approaches in such areas as the treatment of chronic pain, or persistent inflammation.

The value of electronics for health

Huang believes that electrical engineering will play an increasingly important role in human health in the future. He highlights the term “electroceuticals” – a combination of electronics and pharmaceuticals – which is already being discussed among experts. But he also points out that in a time when large sections of humanity have highly sophisticated yet affordable smartphones at their disposal, it is, unfortunately, easy to forget that advances in electrical engineering only come about as a result of tremendous effort. “This painstaking and careful development work is often underappreciated,” says Huang.

Robot dog on the way to the moon

Precise touch screens thanks to AI

Sensors need to be flexible, stretchable, biodegradable, safe and stable for use in the body