As NASA prepares to launch the James Webb Space Telescope in December, the Webb team at NASA’s Marshall Space Flight Center in Huntsville, Alabama, is especially proud reflecting on their work for the mission, which spans more than two decades and primarily focused on development and testing of the mirrors in extreme cold temperatures at which Webb will operate. While Webb is managed by NASA’s Goddard Space Flight Center in Greenbelt, Maryland, teams at Marshall worked closely with Goddard and others over the course of the telescope’s development. 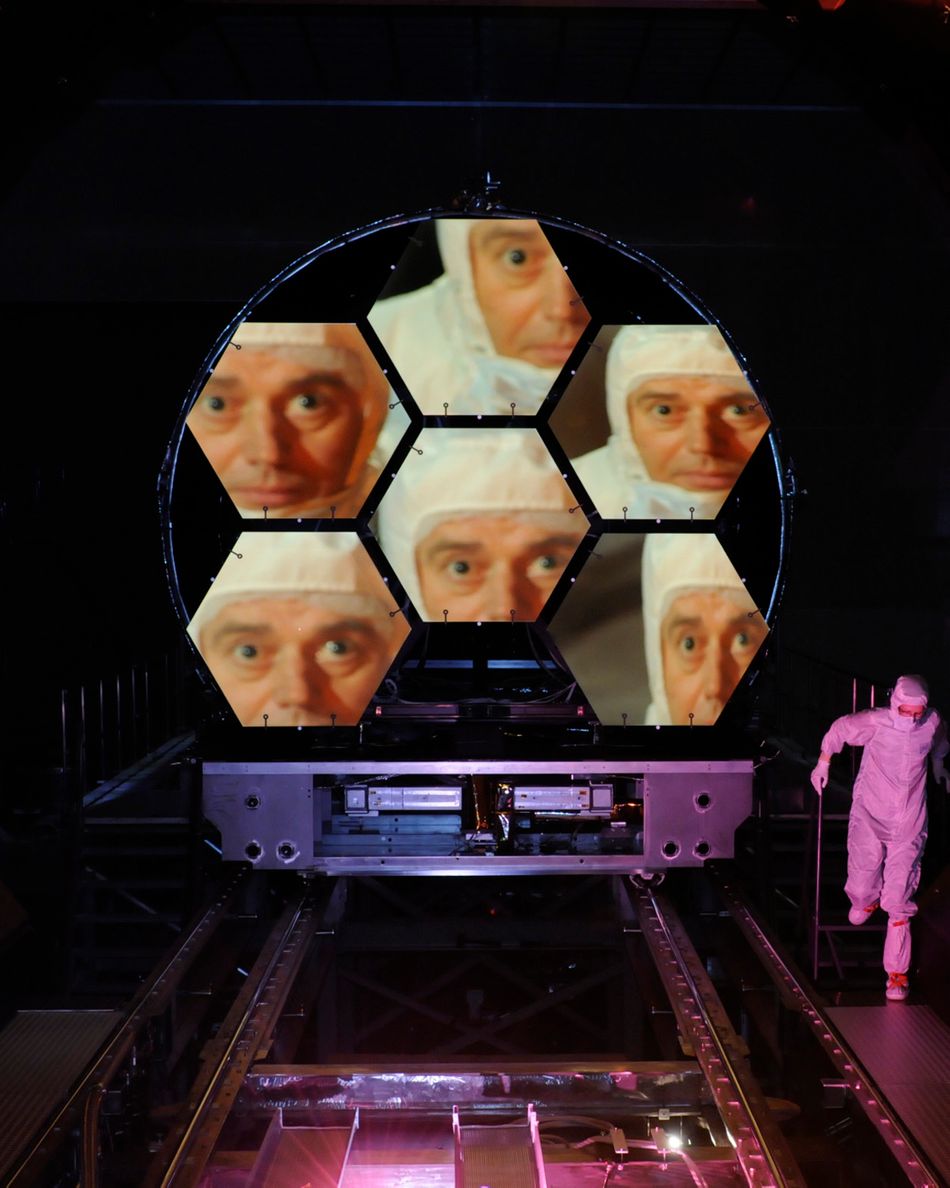 In this image from 2011, project scientist Mark Clampin is reflected in the flight mirrors of the James Webb Space Telescope during testing at the Marshall Space Flight Center. Credits: Ball Aerospace

The upcoming launch of NASA’s Webb telescope will mark the next leap forward in space observation and exploration. Its discoveries could fundamentally alter our understanding of the universe. With a mirror surface area roughly six times larger than that of the Hubble Space Telescope, it has the ability to see some of the earliest objects to form after the big bang. Webb’s science goals are to observe the universe’s light emitted by the first galaxies, and to study exoplanets a little closer to home with an unprecedented level of detail. But that’s just the end of the beginning.

“I will be watching the launch with equal parts pride and trepidation,” said Marshall senior optical physicist Dr. H. Phillip Stahl, who worked mirror technology development for Webb. “I poured 30 years of experience and knowledge into helping make the telescope mirrors a reality. I will be greatly relieved once the observatory is in orbit and operational, and I expect I will feel a sense of ownership with each announced discovery.”

Marshall’s involvement with Webb began in 1989, under the observatory’s previous name, the Next Generation Space Telescope. Marshall was responsible for the strawman design and the integrated modeling of the design.

Concurrently in 1989, Marshall upgraded the X-ray and Cryogenic Facility, the world’s largest X-ray telescope test facility. The facility's unique capability and crew have been essential to the development and verification activities of many agency flagship missions, including the Chandra X-ray Observatory.

“The X-ray and Cryogenic Facility’s involvement in Webb began at Marshall with developing the capabilities to evaluate mirror technologies and verifying optical performance at cryogenic temperatures,” said Jeff Kegley, manager of the facility.

From 1996-2003, Marshall’s focus shifted to designing and developing technology that would be used in support of the mirrors on Webb. The Marshall team provided technical oversight of the Webb mirrors, and the X-ray and Cryogenic Facility was busy running cryo tests of the full-size latch system, the flight mirrors, actuator systems, and flight hardware.

Webb has 18 special lightweight beryllium mirrors that made 14 stops to 11 sites around the U.S. to complete their manufacturing before they were sent to Marshall for rigorous testing.

“Our team’s efforts continually contributed to the project and culminated in the pre-flight verification of the 18 spectacular primary mirror segment assemblies and the backplane structure to which they are now attached,” Kegley said. “Accordingly, we are all extremely excited to see Webb launch and get started on its amazing mission.”

The largest hurdles to overcome were ensuring that the mirrors could withstand the extreme low temperatures the new telescope would have to endure in its deep space home and the size of the mirror array in comparison to rocket payload limitations. This meant that the mirror had to be designed not only to function in the extreme cold temperatures, but it would also need to be segmented, folded, and deployed once in orbit.

“After many years of meticulous work, the mirror team, including all the development and testing partners, are very excited to see Webb launch and deploy successfully,” said Dr. Helen Cole, who was then project manager for Webb test activities at Marshall and currently is the project manager of Chandra. “Every launch is thrilling, but when the launch involves so many of our people who have diligently worked to advance technology and to open a new window on the universe, it makes it that much more special.”

The numerous rounds of design and testing demonstrated many of Marshall’s capabilities, including safety and quality control, logistics, material engineering, and optical subject matter expertise. Webb’s journey from development to flight was also made possible by contributions from thousands of scientists, engineers, and other collaborators from more than 14 countries and 29 U.S. states.

“Marshall is very proud of its role in making the Webb Space Telescope a reality,” Stahl said. “The center has a 60-plus year history of helping to design, build, test, fly, and operate all of NASA’s Great Observatories – Compton, Hubble, Chandra, and Spitzer – as well other missions, including the IXPE telescope NASA just launched. And we look forward to having a significant role on future missions to find and characterize Earth-like planets around other suns.”

Webb is an international collaboration between NASA, the European Space Agency (ESA), and the Canadian Space Agency (CSA). NASA’s Goddard Space Flight Center is managing the development effort. The main industrial partner is Northrop Grumman; the Space Telescope Science Institute will execute daily operations for the mission after launch.