Before setting off on their six-day-long cross country race, participants of the Clean Air Car Race gathered on MIT’s Killian Court for a photo-op. Credits:Photo: Life Magazine

The Clean Air Car Race, which celebrated its 50th anniversary in August, had a lasting impact on the auto industry, government regulations, and the students and faculty who took part.

The year 1970 was a milestone for efforts to combat air pollution. On April 22, the first Earth Day was celebrated. The 1970 Clean Air Act was the first policy to establish federal regulations on car and industry emissions. In July, President Richard M. Nixon announced his plan to establish the U.S. Environmental Protection Agency (EPA) by the end of the year. In the midst of this progress, a team of MIT students and faculty, with assistance from Caltech, organized the Clean Air Car Race — a competition to see which of the many entrants could make the 3,600 miles from MIT to Caltech in a fast, rally-style race, while meeting new stringent emissions standards.

“It was an untidy operation that took a heck of a lot of managing,” recalls John Heywood, professor of mechanical engineering. “It amazed me just how talented and motivated the young people who organized the race were.” Then a junior faculty member, Heywood helped the students who organized the race, and served as a chaperone for the event.

Concerns about air pollution had been mounting for years. Thick clouds of smog hovered over major cities — something students at Caltech in Pasadena, a Los Angeles suburb, felt acutely. In 1968, MIT and Caltech challenged each other to an electric car race with MIT’s car heading west toward Pasadena and Caltech’s car having Cambridge, Massachusetts, as its destination. In Tucson, Arizona, MIT’s car broke down and Caltech was declared the victor.

Shortly after returning from defeat, students began talk of a rematch. That’s when Robert McGregor ’69 SM ’70 entered the picture. As the only graduate student in the room, McGregor became the de facto leader and was named the chair of the organizing committee for what became the Clean Air Car Race. 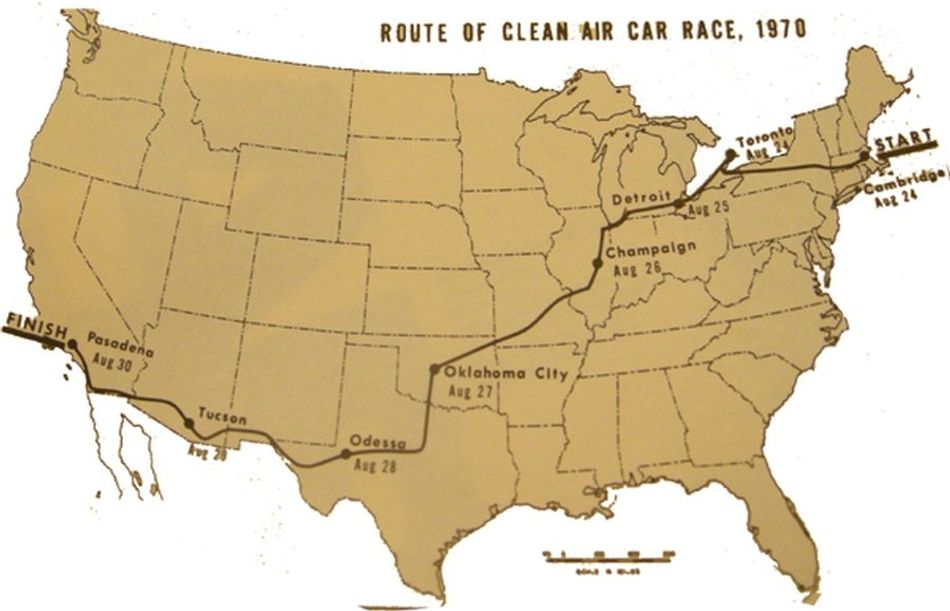 The race’s route was carefully planned to include six stops before finishing on Caltech’s campus in Pasadena, California. Credits:Image: WPI Archives

Unlike the race two years before, the organizing committee decided to open the competition up to any college that wanted to participate. As chair of the committee, McGregor took the lead on reaching out to contacts in government and industry. Quickly, the race gained the attention of the National Air Pollution Control Administration, the EPA’s predecessor.

“The federal government was very interested in supporting these upstart students who wanted to show the auto industry that we could actually build a vehicle with the emission controls that could achieve the future standards that had been proposed by the federal government in the Clean Air Act,” says McGregor.

Emission standards and regulations were still novel to many reluctant automotive companies. “The auto industry was in its early days of learning what it was like to be regulated, and they were under tremendous pressure. Meanwhile, the regulators were still learning how to regulate, and set realistic standards,” says Heywood.

Several car companies also supported the Clean Air Car Race. General Motors provided vehicles to teams who wanted to either modify them as a participating vehicle in the race or use them to transport teams. Ford Motor Company offered the use of their mobile emissions laboratory to test the cars’ emissions in Cambridge and again in Pasadena.

As the pieces began to fall into place, the organizing team established the rules of the race. Participating cars had to have four wheels, be able to carry two people, and meet the proposed 1975-76 federal emissions standards for the amount of hydrocarbons, carbon monoxide, and nitrogen oxides leaving the car’s exhaust pipe.

Roughly 50 entrants from various universities and a few high schools entered the race with a range of vehicles. These were mainly modified internal combustion engine cars, with some electric cars powered by massive batteries, hybrid vehicles, and one car powered by a gas turbine.

On Aug. 24, 1970, the cars set off due west from Massachusetts Avenue. The race was scheduled to last six days, with stops in Ontario; Michigan; Illinois; Oklahoma; Texas; and Arizona before crossing the finish line on Aug. 30 on Caltech’s campus in Pasadena.

Each leg of the journey was meant to last eight to 10 hours. The battery-powered electric vehicles participating ended up being at a disadvantage. The route was outfitted with charging stations every 60 miles. The charging process would take about an hour, meaning the electric cars took double the amount of time to finish each leg, clocking in 16- to 20-hour days.

As chaperone, Heywood would wake up before the sun each day and knock on dorm room doors to wake up the tired and still-asleep college student teams. During the day, he would crunch numbers in the back of a car to figure out each car’s fuel economy.

“I would sit in the back of a bumpy station wagon, using my slide rule to calculate the fuel economy for each entrant,” says Heywood. “That’s what engineers do — you do what is needed regardless of the environment.” 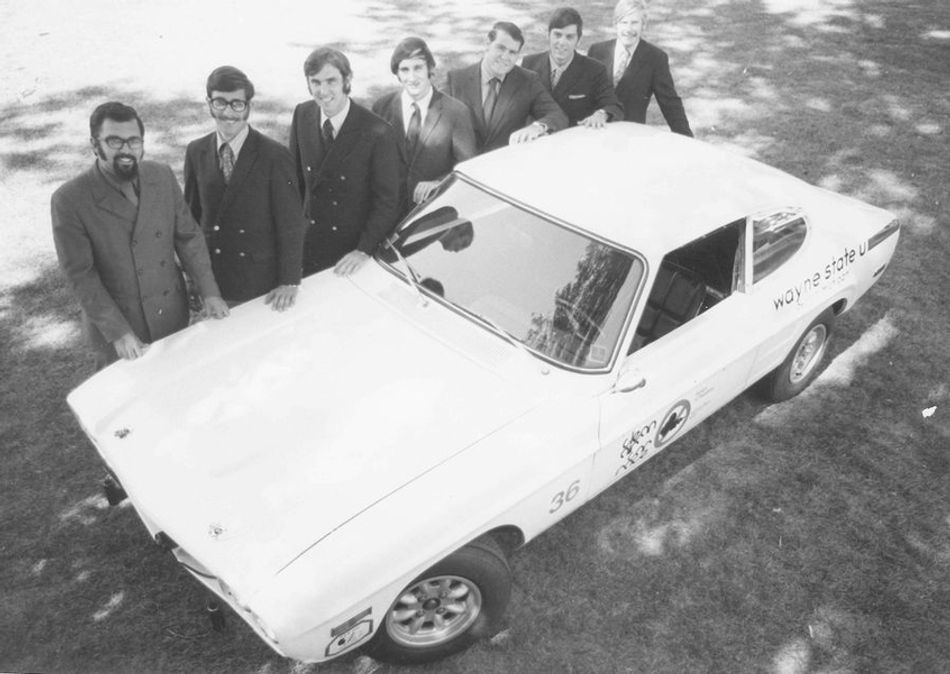 Almost all the entrants crossed the finish line in Pasadena. When MIT’s gas turbine car, which was driven by one of McGregor’s fraternity brothers, barreled into Caltech’s campus, it melted the finish line banner with its blast of hot burned gases from its chimney exhaust pipe. The judging panel declared Wayne State University’s entrant, a gasoline-engine car with a tightly controlled fuel-injection system, the winner.

In the end, the race was less about who placed first or last and more about demonstrating that the hurdles to having cleaner emissions in cars were not as insurmountable as some in the auto industry then thought.

“In those early days of emission regulations, having a bunch of college kids do something seemingly of their own initiative and trying new creative things really helped show Detroit the way, in a sense,” adds Heywood.

The Clean Air Car Race had an immediate impact on policies and regulations. Participants of the race were called to testify both for state legislators and for Washington, D.C.

“There was this groundswell of young people participating in the debate that would confirm that where the federal government was headed with these proposed standards was not unrealistic,” says McGregor. “We were a contributing factor to the EPA being able to stick with those standards that they had proposed and getting the auto industry to comply.”

Fifty years later, there are still lessons to be learned from the Clean Air Car Race. McGregor extols the virtue of “competitive engineering” as a way to galvanize young students into action. Heywood, meanwhile, sees parallels with current-day issues surrounding greenhouse gas emissions. He suggests that perhaps a friendly competition among talented engineering students could move the needle in the right direction, as it did 50 years ago.

A controllable membrane to pull carbon dioxide out of exhaust streams

As a communicator who has worked for both the largest scholarly publisher in the world and the number-one ranked research university in the world, I've developed a passion for telling the story behind scientific research in a way that's compelling and accessible to lay and expert audiences alike. ...

While wildfires remain an unpredictable threat, researchers are attempting to mitigate that uncertainty by using mathematical and statistical models to identify the most cost-effective and efficient strategies for reducing wildfire risk through vegetation removal or fuel treatment strategies.

A controllable membrane to pull carbon dioxide out of exhaust streams

Electrically switchable system could continuously separate gases without the need for moving parts or wasted space.