Quality control of implants. Image provided by the staff of the international laboratory “Laser Micro- and Nanotechnologies”

The research team consists of scientists from Russia, Australia, Germany, and France, including professor Boris Chichkov, the head of the Laboratory of Laser Nanoengineering at the Leibniz University Hannover, and Elena Ivanova, DSc in Biology and a distinguished professor at Royal Melbourne Institute of Technology (RMIT). The project’s coordinator from the Russian side is the head of the International Laboratory “Laser Micro- and Nanotechnologies”, professor Vadim Veiko.

Among other organizations involved in the project are the Lenmiriot plant that focuses on the production of prosthetic components, the ORTOS dental milling center, First Pavlov State Medical University of St. Petersburg, Institute of Problems of Chemical Physics of the Russian Academy of Sciences, and University of Lyon (France).

The project focuses on solving the relevant problem of implant rejection and the risk of tissue inflammation as a result of bacterial contamination. The team proposed a special biometric design of implant surface that imitates the structure of bone tissue. The specific design is still a work in process: the scientists experiment with the surface structure, whether it shall be discrete, i.e. have a separate housing for every cell, or be continuous. i.e. house several cells at once.

“We’ve come up with a phenomenological hypothesis that for a better biointegration of a titanium implant into bone tissue, you need such a surface structure that will involve the least external physical impact on a cell. We decided to base this structure on what we see in nature, as a cell is a living object and is known to be sensitive to any external effects,” comments Yulia Karlagina, a member of the team, PhD student and engineer at ITMO’s Faculty of Laser Photonics and Optoelectronics.

The implant’s surface will be irradiated with a laser for the purpose of increasing its biocompatibility and microbial resistance. The laser will become the key instrument for controlling the functional properties of implants’ surface: a special combination of emission modes and schemes of scanning the surface with laser pulses makes it possible to simultaneously shape the surface structure and change its chemical composition.

Apart from practical research, the scientists also plan to do fundamental research on the relationship between the biocompatibility of implants and the physical and chemical properties of their surface, as well as the parameters of laser impact. No one has yet offered a model that describes the interrelation between all these factors. 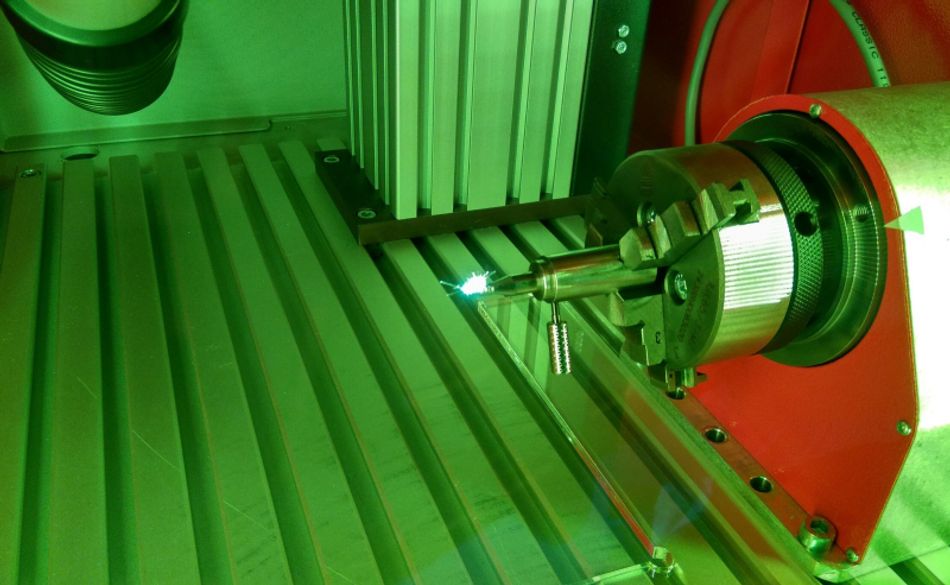 The process of laser processing through a safety glass. Image provided by the staff of the international laboratory “Laser Micro- and Nanotechnologies”

Then again, the scale and comprehensive nature of the research implies intensive and tedious work of of the whole team:

“This is an interdisciplinary project, hence it calls for conducting research in various fields of science: biomedicine and physics. This is associated with difficulties that have to do with the number of experimental research projects and their deadlines, the necessity to account for the most significant physical and chemical properties of implants’ surface that affect their functional properties, for the purpose of conducting theoretical computations,” explains Yulia Karlagina. “We’ve planned the project in such a way that, having applied the experiment planning theory and the methods of theoretical modeling, we’d be able to conduct detailed research in the field of physics, and then confirm the efficiency of the proposed methods with a minimum number of in vivo and in vitro experiments.” 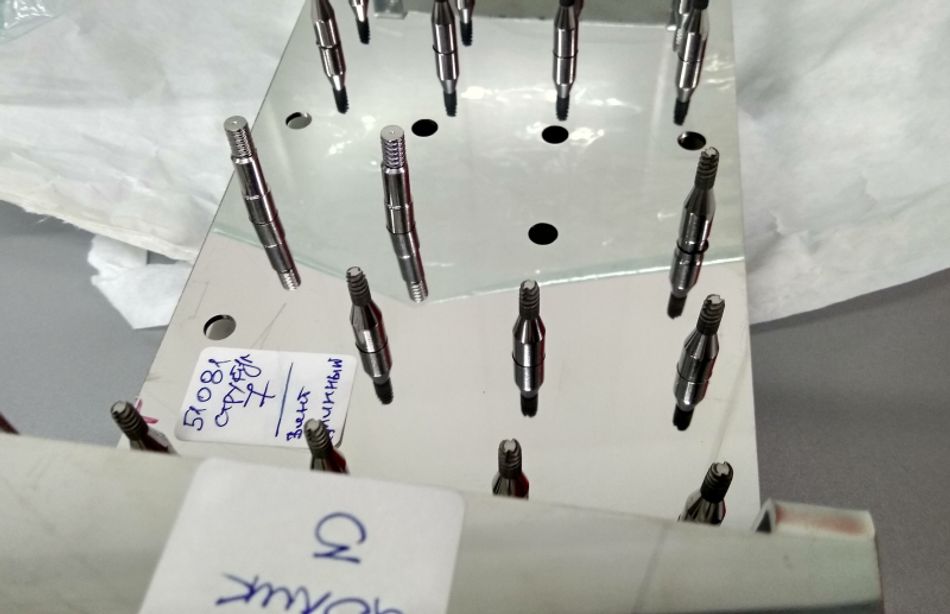 Implant workpieces. Photo provided by the staff of the international laboratory “Laser Micro- and Nanotechnologies”

For the time being, the project’s authors focus on dental implants, but in the future, their work could be applied to any other types of implants: hip and knee replacement implants, cranial implants, etc. The research results can also be used for the development of an affordable technology of functionalizing the surface of other medical equipment, which offers many prospects both on the Russian and international market. As for the antibacterial biocompatible structure, it can be used as a basis for launching a batch manufacturing of dental implants in St. Petersburg, for example at one of ITMO’s partner organizations, the ORTOS dental milling center.

The project makes use of both new approaches and existing technologies. For one, the previously developed laser coloring technology is used for the purpose of improving dental implants’ visual appearance –  laser impact on titanium surface is used to form an interference oxide layer. This offers a way to control the color of the product by making it lighter or darker. What’s more, this coating also has bactericidal properties.

The project is planned for three years; the final results must be presented in 2020. The team has already gotten a patent on the invention “A method for laser structuring of the surface of titanium dental implants” and conducted the initial research.

“We’ve already begun the work aimed at enhancing the integration potential of titanium implants via shaping a biomimetic surface structure and conferring bactericidal properties to a titanium surface, and even got results of preliminary in vitro and in vivo research that prove that we are moving in the right direction. The methods and technologies that we develop can be used in the creation of an approach to the manufacturing of personalized implants that have biocompatibility and bactericidal properties that allow for attaining a higher quality of of higher quality surgery and dentistry,” concludes Galina Odintsova, a researcher at ITMO’s Faculty of Laser Photonics and Optoelectronics and one of the project’s leading researchers.

The invention opens up new opportunities in the field of medicine, including endoscopy and laparoscopy, quantum technologies, and fiber-optic sensors. The concept proposed by the scientists got on the front cover of the October issue of ACS Photonics.