With this non-paint brush of over 20 colors and shades, artists may no longer need to be afraid of uneven lines or inadequate palettes. All missteps can be easily erased or repainted with no risk of ruining a picture. The first prototype of the laser brush should see the light of day by the end of summer. In the meantime, the researchers have published an article describing the very technology of laser miniature painting on metallic surfaces.

There is no need to use paints or toxic substances for applying colorful images to metals anymore as laser technologies have proven to be more efficient at doing this job. Currently, several research centers around the world are engaged in the development of such technologies, including research teams at ITMO University.

All kinds of manufacturers already use laser technologies for their logos, barcodes, and trademarks. Until now, only robots controlled by a computer algorithm were able to draw on metallic surfaces. However, ITMO scientists already came up with a special device that would allow artists to create their artworks with the help of laser coloring.

“Although I don’t mind programmable industrial processes, I remain true to the idea of freedom. It made me question the need to be confined only to technologies,” recalls Vadim Veiko, a co-author of the project, an idea initiator, and a professor at ITMO’s Faculty of Photonics. “On one hand, we have lasers that can extract colors when interacting with metals, while on the other, we have human beings’ vivid imagination. So, why can’t we create some sort of a laser-based brush for artists to bring their boldest ideas to life?”

Drawings out of thin air

That realization ignited the idea of laser brushes that would let artists draw on a sheet of metal, just as they do with pencils on paper. The technology retained the working principles used in industrial processes.

“We use laser pulses to heat the material below melting point and thus obtain an ultra-thin film of metal oxides in a laser-irradiated zone,” explains Yaroslava Andreeva, a co-author of the project and a research engineer at ITMO’s International Laboratory for Laser Micro- and Nanotechnologies. “Like any other, this film exhibits interference effects. It reflects certain areas of the spectrum in various ways and as a result, we see different colors. The same effect can be observed in soap bubbles or oil spills in puddles.”

Now there is one major problem that exists in current laser etching technologies. A good computer program never makes a mistake, and a robotic arm doesn’t flinch while drawing. A completed factory logo usually doesn’t require updates or color changes, so this is perfectly fine. A true artist, however, may suddenly decide to change the shape of painted patterns or the color of aspects of their drawing. With existing technologies, you have to resort to dangerous chemicals or vacuum or inert gas processing in order to make such changes possible. This encouraged the scientists to find a simple and convenient way to undo mistakes on metallic canvases. 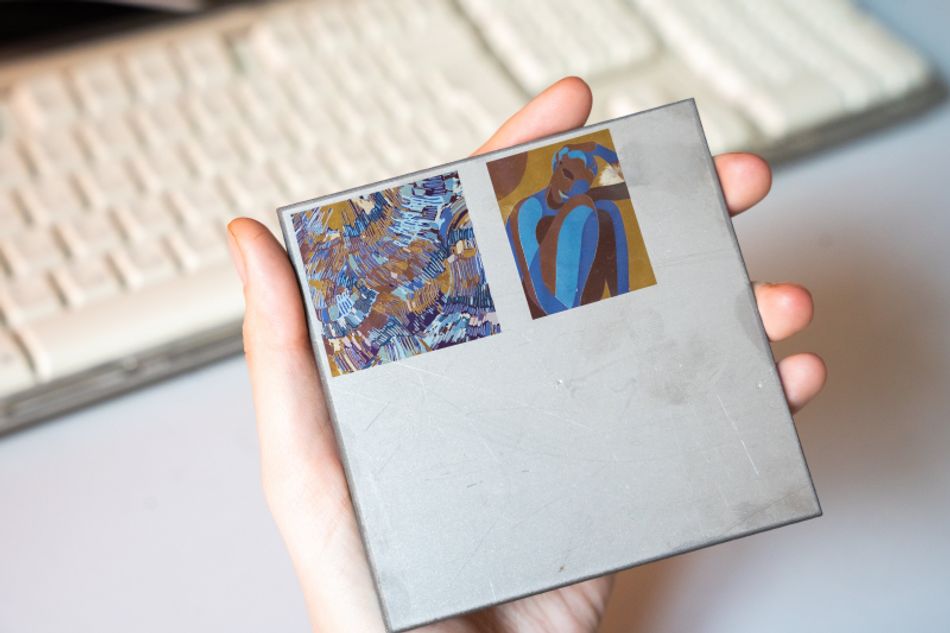 The researchers decided to revise the traditional approach to color laser marking. While earlier scientists tried to reach melting point, now they aimed for evaporation temperature. Under such conditions, the formed film starts to evaporate and then is replaced by a new oxide of a different thickness and therefore a different color during the cooling stage.

“Researchers have traditionally assumed that metals shouldn’t be evaporated as it leads to the elimination of colored films,” says Yaroslava Andreeva. “But we started to question this hypothesis. After all, a film forms at temperatures below melting, so it doesn’t matter whether we decide to heat a cold metal or cool it when it’s still heated. The outcome will remain the same. How does it work? Let’s say, an artist used red color for their painting but then changed their mind and decided to try yellow. To correct this mistake, you need to expose certain areas to the laser beam once again and change its speed rate. Then, the previous layer will be removed and a new color (eg. yellow) will appear. If the artist isn’t satisfied with the result, we repeat the procedure and get a blue color.” 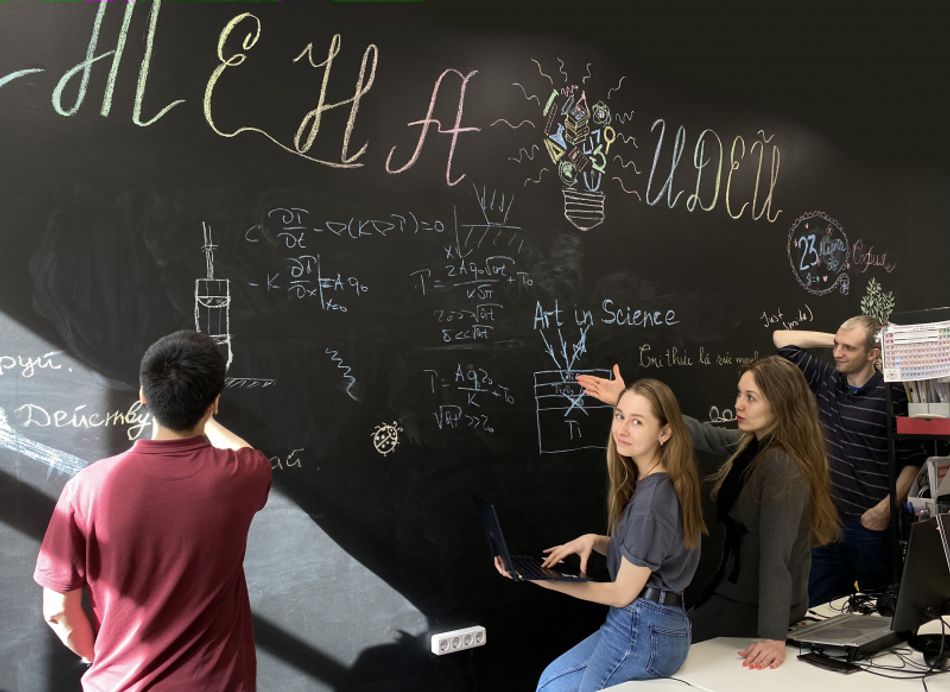 The research team The color depends on the laser’s scanning speed and the surface’s cooling time. Thus, the faster the metal cools off, the faster an oxide film appears and the thinner it is. Depending on the thickness of such films, the light will act differently and certain parts of the spectrum will interfere (or, simply put, merge) at the output. As a result, a certain color will be observed. The thickness modification leads to color change – from light yellow to red, purple, dark and light blue.

Over 20 colors and shades

The scientists have shown that the color palette – which contains over 20 colors and shades – can be expanded due to the variability and accuracy of laser parameters. To demonstrate its capabilities, the researchers made reproductions of Van Gogh's paintings The Starry Night and Self-portrait with the help of the programmable automated laser systems. 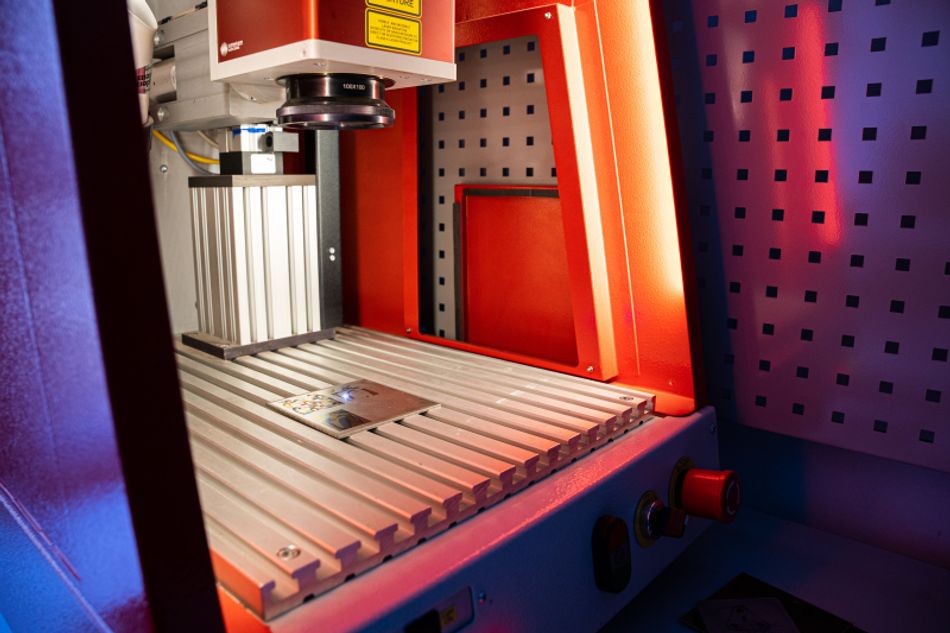 The device for laser painting or laser paintbrush, as the authors of the work called it, had yet to be created. This will be a handy pen-like device connected to a laser source through a fiber-optic cable. Its design is already developed, and now the scientists are working on its prototype, which will be finished by the end of summer.

Both scientists and artists became interested in this invention. So, the art gallery of Sevkabel Port offered the researchers to organize an exhibition featuring artworks based on laser technologies once the prototype is ready for testing. 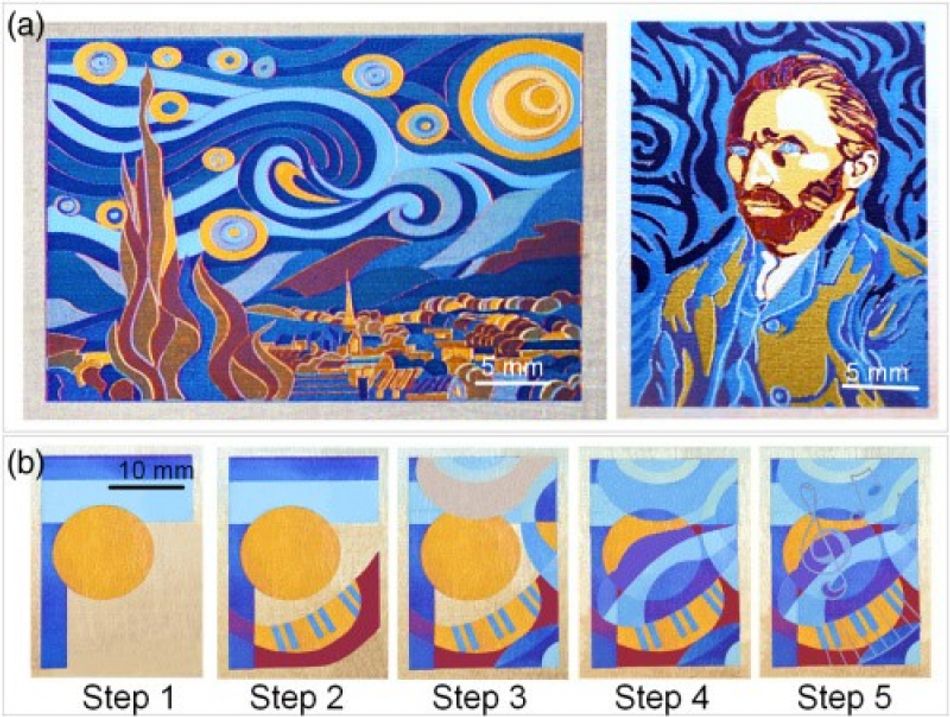 Reproductions of the paintings by Vincent van Gogh: The Starry Night and Self Portrait. Illustration from the article. Credit: osapublishing.org

The research team also discussed the possible applications of their work in science.

“We talked about our device with Vladimir Vasilyev, the Rector of ITMO University, and shared our worries about its non-user-friendly nature. It’s not easy to master this technique as first our brain has to get used to it. To solve this issue, he suggested turning to artificial intelligence. The algorithm will train right in the process of a live artist painting. This will also help us to better understand the principles and techniques of machine learning,” concludes Vadim Veiko.

Metaphotonics is one of such field that has the potential to revolutionize traditional views of optical and electronic devices. How? In this article, ITMO’s Sergey Makarov and Ivan Sinev help us discover this nascent field.