Rendering by Péter Szirmai and Endre Horváth for PNAS.

“The key was to get the technology to work at room temperature,” explains László Forró, EPFL physicist. “We had already known that it was possible to rewrite magnetic spin using light, but you’d have to cool the apparatus to – 180 degrees Celsius.”

Forró, along with his colleagues Bálint Náfrádi and Endre Horváth, succeeded at tuning one ferromagnet at room temperature with visible light, a proof of concept that establishes the foundations of a new generation of hard drives that will be physically smaller, faster, and cheaper, requiring less energy compared to today’s commercial hard drives. The results are published in PNAS.

A hard drive functions as a data storage device in a computer, where a large amount of data can be stored with an electromagnetically charged surface.

Nowadays, the demand for high capacity hard drives has increased more than ever. Computer users handle large files, databases, image or video files, using software, all of which require a large amount of memory in order to save and process the data as quickly as possible.

The EPFL scientists used a halide perovskite/oxide perovskite heterostructure in their new method for reversible, light-induced tuning of ferromagnetism at room temperature. Having a perovskite structure represents a novel class of light-absorbing materials. 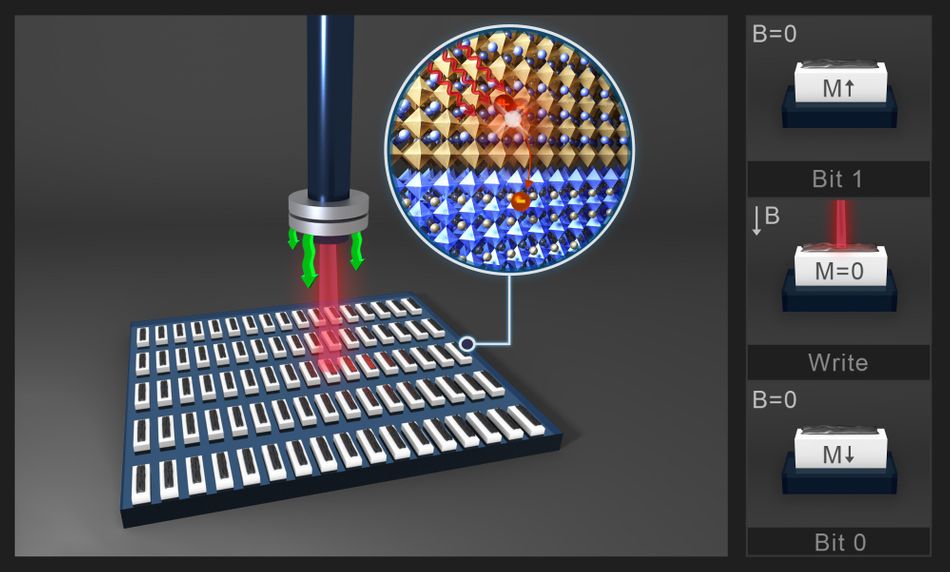 As reported in the publication,

“The rise of digitalization led to an exponential increase in demand for data storage. Mass-storage is resolved by hard-disk drives, HDDs, due to their relatively long lifespan and low price. HDDs use magnetic domains, which are rotated to store and retrieve information. However, an increase in capacity and speed is continuously demanded. We report a method to facilitate the writing of magnetic bits optically. We use a sandwich of a highly light sensitive (MAPbI3) and a ferromagnetic material (LSMO), where illumination of MAPbI3 drives charge carriers into LSMO and decreases its magnetism. This is a viable alternative of the long-sought-after heat-assisted magnetic recording (HAMR) technology, which would heat up the disk material during the writing process.”

The method is still experimental, but it may be used to build the next generation of memory-storage systems, with higher capacities and with low energy demands. The method provides a stand for the development of a new generation of magneto-optical hard drives. Forró concludes: “ We are now looking for investors who would be interested in carrying on the patent application, and for industrial partners to implement this original idea and proof of principle into a product.”