The H2020-funded INSPIRE project is leading a revolution in photonic integrated circuits with so-called micro-transfer printing technology and establishment of world-first fabrication platform.

Our access to the internet is made possible by an ensemble of technologies such as photonic integrated circuits (PICs). There is also potential for PIC devices in healthcare or sensing, however their use in these applications is limited by issues with scalability and high-throughput manufacturing. The Eindhoven University of Technology (TU/e) coordinated H2020 funded project INSPIRE seeks to change how PIC devices are fabricated to make them suitable for applications beyond communications and speed up their large-scale production. INSPIRE has received close to 5 Million Euros in funding.

The University of Cambridge is a consortium partner on the INSPIRE project. The activity at Cambridge primarily involves the Photonics Systems Research group. Dr Qixiang Cheng is PI for this project and Professor Richard Penty is the Co-I.

The technological world is built on a foundation of electronic devices. In recent years though there has been an upsurge in the use of photonic devices, particularly for data transfer applications. These photonic devices are based on materials like silicon, silicon nitride (SiN) and indium phosphide (InP).

While these devices have the potential for wider impact in other fields like sensors used in aircraft or communication devices, their uptake is limited as different materials need to be effectively combined to meet performance requirements.

For example, high-performance fiber sensors used in infrastructure monitoring and microwave signal processing in RADAR systems both require low-noise operation and ultra-low degradation of signals. This can only be achieved through a combination of materials in the manufacturing process. If this manufacturing process can be properly scaled to allow for large-scale production, it is expected that these photonic devices can have a major impact on sensing applications. 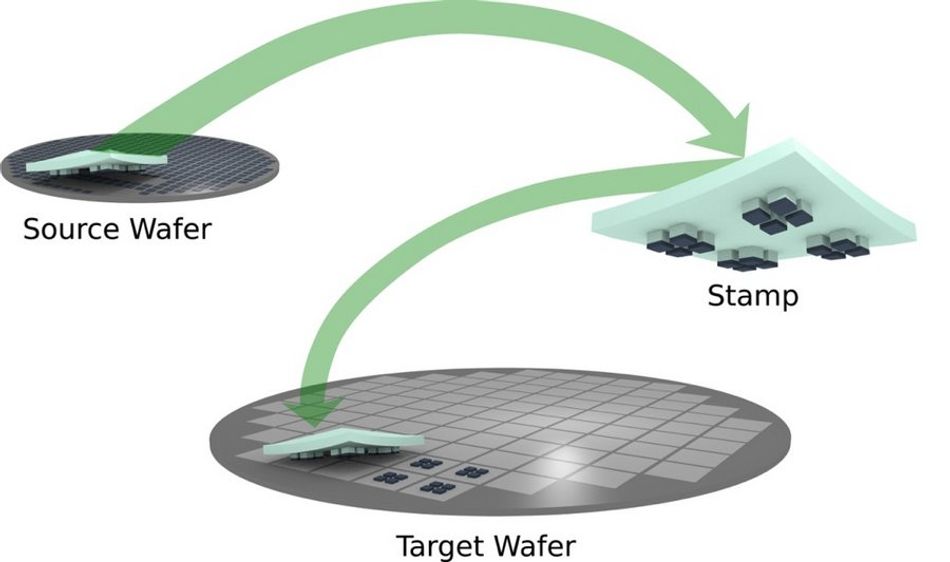 To facilitate the combination of these high-performance, so-called III-V opto-electronic materials in photonic devices, INSPIRE is developing wafer-scale micro-transfer printing technologies, and the project has received H2020 funding to the tune of 5 million euros to achieve its goals.

In micro-transfer printing, devices are first made on a source wafer, after which they are transferred to a target wafer (see image). This printing concept has been established and widely applied by project partner X-Celeprint to different wafers and materials. The INSPIRE project is focusing on the next step: parallel device printing with accurate placement where many integrated devices can be printed at the same time.

The INSPIRE micro-transfer printing technology will be validated for three specific cases: fiber sensors to measure stress, strain, and temperature for use in airplane safety measures, a microwave photonic radio-frequency (RF) pulse generator with application in RADAR and wireless communication, and optical switches for energy-efficient data centers. Compact versions of the III-V opto-electronic components will be developed, enabling designers to use this platform for a wide range of applications.

INSPIRE aims to sustain Europe’s industrial leadership in photonics by consolidating established fabrication approaches, such as those from the pioneering pure-play foundry and TU/e spinoff SMART Photonics and the silicon photonics pioneer imec, with the micro-transfer printing technology of X-Celeprint.

This will result in a world-first fabrication platform that combines the strengths of two of the most well-known PIC manufacturing platforms. Methods will chiefly be developed for the coupling of SiN and InP processes, but could also be used for silicon-based photonics.

INSPIRE coordinator Professor Martijn Heck from Eindhoven University of Technology is excited by the possibilities that lie ahead: “By combining SMART and imec technologies, with only minor changes to the fabrication processes, we can leverage the major investments in the development of these platforms from the last decade. We can thus significantly reduce the time needed to transfer our technology out of the lab, and make a faster and telling impact in new application areas.”

And the potential of the INSPIRE approach is demonstrated by the participation of industrial partners such as Dr. Jerome Bourderionnet from THALES: “The INSPIRE platform enables high-performance building blocks, such as low-linewidth lasers, which are at the heart of THALES’ applications for optical signal processing at large, or sensing integrated systems.”

INSPIRE aims to create a full-function PIC platform, compatible with open-access pilot manufacturing, and with an order of magnitude lower cost for volume production.

INSPIRE’s generic approach makes the technology widely applicable and ensures that European innovators can focus their research and development directly on manufacturing platforms. As a result, it should take a shorter time to bring these PIC technologies to market.

The INSPIRE project consortium is made up of TU/e, imec, Thales, University of Cambridge, X-Celeprint, SMART Photonics, and Amires. The project officially started on 1st January 2021. The project has received funding from the European Union’s Horizon 2020 research and innovation programme under grant agreement n°101017088, project INSPIRE.

The Photonic Systems group at the Department of Engineering, University of Cambridge has taken leadership roles in several large national and international research projects, including the UK INTERNET and UP-VLC programme grants, the Cambridge-UCL EPSRC Centre for Doctoral Training in Integrated Photonic and Electronic Systems, the EU ERA-NET+ TUCAN WDM PON project and the PARADIGM IP, to name but a few examples. It has a record of knowledge transfer to both large and small companies (one example being the polarisation stabilised VCSEL which is now used in laser mice with over 100M units sold annually) and co-founded the radio over fibre distribution company Zinwave (www.zinwave.com). The Photonic Systems Group has a distinguished history in innovative photonic component and system research. In terms of integrated component research, innovation examples include the world’s first integrated InGaAs quantum dot switch, the development of the world’s first uncooled WDM laser, and the development of uncooled laser diodes with ultrahigh linearity for RF signal distribution.

Professor Richard Penty says "We are excited to be a part of the H2020 INSPIRE project as we believe it is developing a new technology with the potential to transform the ease of manufacture and scalability of heterogenous integration of photonic integrated circuits.  We plan to use the enhanced platform to boost the performance and port count of our optical switch chips, which we aim to apply to connecting server racks in data centres and processors and memory for high performance computing."

Machine for chips with light

The University of Cambridge is one of the world's foremost research universities. The University is made up of 31 Colleges and over 150 departments, faculties, schools and other institutions. Its mission is 'to contribute to society through the pursuit of education, learning, and research at the hi...

Introducing 'Printer.HM' - the future of 3D printing for soft materials

Machine for chips with light

In order to make large-scale production of affordable photonic chips possible in the near future, it would seem logical to borrow lithography techniques from the electronics industry.

Scientists from ITMO University, Saint Petersburg Academic University, and ETH Zurich have created a flexible and transparent membrane which makes infrared beams visible to the human eye. It can be used to make visualizers needed at optical laboratories and production facilities.