MIT engineers demonstrated a bariatric balloon that can be inflated in the stomach and then degraded by shining light on the seal, which is made of a novel light-sensitive polymer. Image: Ritu Raman

A variety of medical devices can be inserted into the gastrointestinal tract to treat, diagnose, or monitor GI disorders. Many of these have to be removed by endoscopic surgery once their job is done. However, MIT engineers have now come up with a way to trigger such devices to break down inside the body when they are exposed to light from an ingestible LED.

The new approach is based on a light-sensitive hydrogel that the researchers designed. Incorporating this material into medical devices could avoid many endoscopic procedures and would give doctors a faster and easier way to remove devices when they are no longer needed or are not functioning properly, the researchers say.

“We are developing a set of systems that can reside in the gastrointestinal tract, and as part of that, we’re looking to develop different ways in which we can trigger the disassembly of devices in the GI tract without the requirement for a major procedure,” says Giovanni Traverso, an assistant professor of mechanical engineering, a gastroenterologist at Brigham and Women’s Hospital, and the senior author of the study.

In a study in pigs, the researchers showed that devices made with this light-sensitive hydrogel can be triggered to break down after being exposed to blue or ultraviolet light from a small LED.

Over the past several years, Traverso and Langer have developed many ingestible devices designed to remain in the GI tract for extended periods of time. They have also worked on a variety of strategies to control the breakdown of such devices, including methods based on changes in pH or temperature, or exposure to certain chemicals.

“Given our interests in developing systems that can reside for prolonged periods in the gastrointestinal tract, we continue to investigate a range of approaches to facilitate the removal of these systems in the setting of adverse reaction or when they are no longer needed,” Traverso says. “We’re really looking at different triggers and how they perform, and whether we can apply them to different settings.” 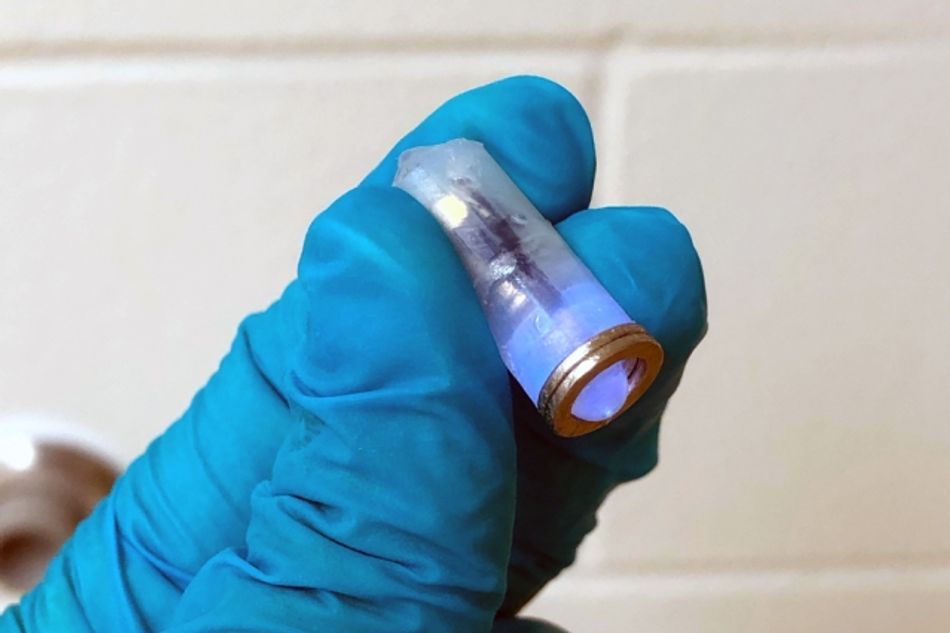 An ingestible LED like this could be swallowed to expose light-sensitive medical devices to light, helping them to break down in the body. Image: Ritu Raman

In this study, the researchers explored a light-based trigger, which they believed could offer some advantages over their earlier approaches. One potential advantage is that light can act at a distance and doesn’t need to come into direct contact with the material being broken down. Also, light normally does not penetrate the GI tract, so there is no chance of accidental triggering.

To create the new material, Raman designed a light-sensitive hydrogel based on a material developed in the lab of Kristi Anseth, a former Langer lab postdoc who is now a professor of chemical and biological engineering at the University of Colorado at Boulder. This polymer gel includes a chemical bond that is broken when exposed to a wavelength of light between 405 and 365 nanometers (blue to ultraviolet).

Raman decided that instead of making a material composed exclusively of that light-sensitive polymer, she would use it to link together stronger components such as polyacrylamide. This makes the overall material more durable but still allows it to break apart or weaken when exposed to the right wavelength of light. She also constructed the material as a “double network,” in which one polymer network surrounds another.

The material’s properties can be tuned by varying the composition of the gel. When the light-sensitive linker makes up a higher percentage of the material, it breaks down faster in response to light but is also mechanically weaker. The researchers can also control how long it takes to break down the material by using different wavelengths of light. Blue light works more slowly but poses less risk to cells that are sensitive to damage from ultraviolet light.

The gel and its breakdown products are biocompatible, and the gel can be easily molded into a variety of shapes. In this study, the researchers used it to demonstrate two possible applications: a seal for a bariatric balloon and an esophageal stent. Standard bariatric balloons, which are sometimes used to help treat obesity, are inflated in a patient’s stomach and filled with saline. After about six months, the balloon is removed by endoscopic surgery.

In contrast, the bariatric balloon that the MIT team designed can be deflated by exposing the seal to a tiny LED light, which would in principle be swallowed and then pass out of the body. Their balloon is made of latex and filled with sodium polyacrylate, which absorbs water. In this study, the researchers tested the balloons in pigs and found that the balloons swelled up as soon as they were placed in the stomach. When a small, ingestible LED emitting blue light was placed in the stomach for about six hours, the balloons slowly deflated. With a higher-power light, the material broke down within 30 minutes.

The researchers also molded the light-sensitive gel into an esophageal stent. Such stents are sometimes used to help treat esophageal cancer or other disorders that cause a narrowing of the esophagus. A light-triggerable version could be broken down and passed through the digestive tract when no longer needed.

In addition to those two applications, this approach could be used to create other kinds of degradable devices, such as vehicles for delivering drugs to the gastrointestinal tract, according to the researchers.

“This study is a proof of concept that we can create this kind of material, and now we’re thinking about what are the best applications for it,” Traverso says.

While medical materials have come a long way toward treating conditions in the body, sometimes they’re a bit too stiff to be a perfect fit. Research at Texas A&M University aims to engineer new biomaterials that will provide effective treatment while also moving better with the body.