Colon cancer, the third most common and most deadly cancer in the United States, can be difficult to diagnose early using traditional visual methods with an endoscope. Using an imaging technique commonly used to scan eyes, a team of Washington University in St. Louis researchers was able to distinguish normal from abnormal tissue in the colon at a very high rate of accuracy, providing potential for the technique to be used in diagnostics of colorectal disease.

Yifeng Zeng, a fifth-year doctoral student in the McKelvey School of Engineering, has been working with Quing Zhu, professor of biomedical engineering and of radiology in the School of Medicine, throughout his doctoral study to build a machine learning system that will detect normal colorectal tissue from abnormal tissue. He has been collecting tissue samples from clinicians at the School of Medicine to build a database of normal tissue, abnormal tissue with polyps, and cancerous tissue.

Since 2017, he has been using optical coherence tomography (OCT), an optical imaging technology that has been used for two decades in ophthalmology to take images of the retina and has been studied as an optical biopsy tool. OCT detects the differences in the way health and diseased tissue refract light, is highly sensitive to precancerous and early cancer changes and provides high spatial and depth resolution for up to one to two millimeters. Since most colon cancers originate in the muscosal or innermost layer, the 1-millimeter depth is adequate to detect early cancers, Zeng said. 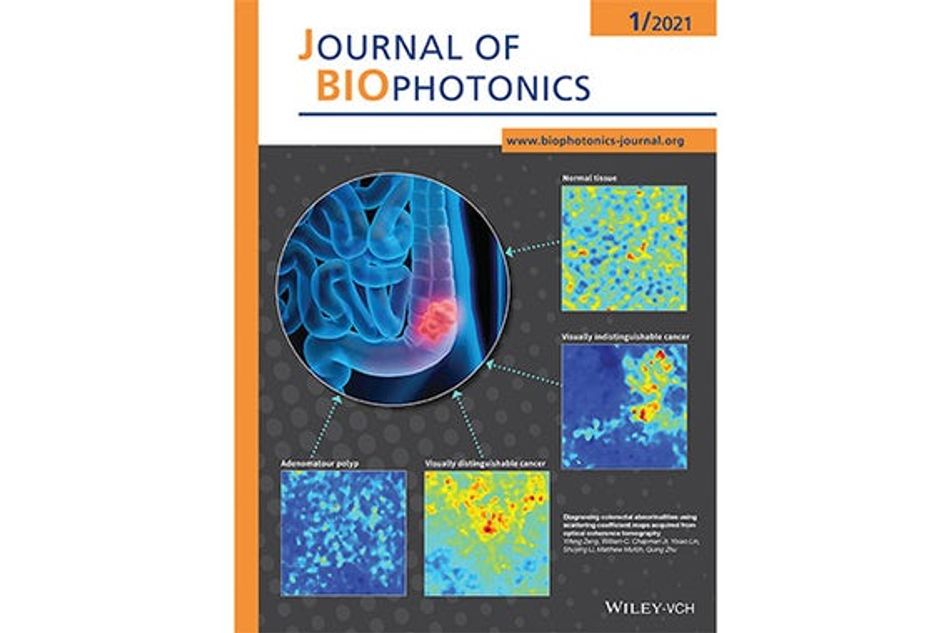 In results published in the January 2021 Journal of Biophotonics, Yifeng Zeng and a team of researchers found that OCT showed differences in the textures and patterns of normal and abnormal tissue, which are difficult to determine using traditional visual inspection.

In results published in the January 2021 Journal of Biophotonics, in which their image is featured on the inside cover, Zeng and the team found that OCT showed differences in the textures and patterns of normal and abnormal tissue, which are difficult to determine using traditional visual inspection. Using computer-vision-based imaging features acquired from scattering coefficient maps, they fed the data from tissue samples from 33 patients at Washington University School of Medicine into two different models. One model was able to distinguish normal from abnormal tissue with 94.7% sensitivity, or the ability to correctly identify patients with disease, and 94% specificity, or the ability to correctly identify patients without disease. The second model was able to differentiate between cancerous tissue and a precancerous polyp with 86.9% sensitivity and 85% specificity.

It is the first report using texture features and computer vision-based image features acquired from scattering coefficient maps to differentiate normal tissue, cancerous tissue and tissue with polyps. Collaborators on the project from the School of Medicine include Matthew Mutch, MD, the Solon and Bettie Gershman Chair in Colon and Rectal Surgery, chief of the Section of Colon and Rectal Surgery and professor of surgery; and William Chapman Jr., MD, a resident physician in surgery.

“These results show a good result of early-state characterization,” said Zeng, who expects to graduate in May 2021. “This has potential to differentiate polyps and different types of cancer, since each cancer has a different pattern.”

Moving forward, the team plans to integrate the OCT system into the endoscope used in traditional colonoscopies to test it in patients. In addition, they plan to make the four years’ worth of data available through open source.

Maysam Chamanzar’s team has developed a new class of materials for optical biointerfaces.