Following the successful test of the novel hybrid rocket engine 'AHRES-B' in spring 2019, the German Aerospace Center (Deutsches Zentrum für Luft- und Raumfahrt; DLR) carried out two further successful tests with the significantly larger VISERION variant on 17 June and 7 July 2021. The test preparations and commissioning were carried out by a team from the Spacecraft Department of the Institute of Aerodynamics and Flow Technology at the test stand for hybrid rocket engines at the DLR site in Trauen.

The results of the current tests show that the VISERION engine, which was developed in the DLR projects AHRES and ATEK and is now being tested in the DLR cross-sectional Simulation Based Certification (SimBaCon) project, is far more efficient than previous hybrid rocket engines. For the researchers at the Institute of Aerodynamics and Flow Technology, this is a particular cause for celebration, because hybrid rocket engines are not only fundamentally more economical and safer than conventional rocket engines, VISERION is also significantly more efficient than all of its predecessors. "The current tests have shown that the technological development of hybrid rocket engines has now advanced far enough for practical uses such as in sounding rockets," explains Thino Eggers, Head of the Spacecraft Department at the DLR Institute of Aerodynamics and Flow Technology. 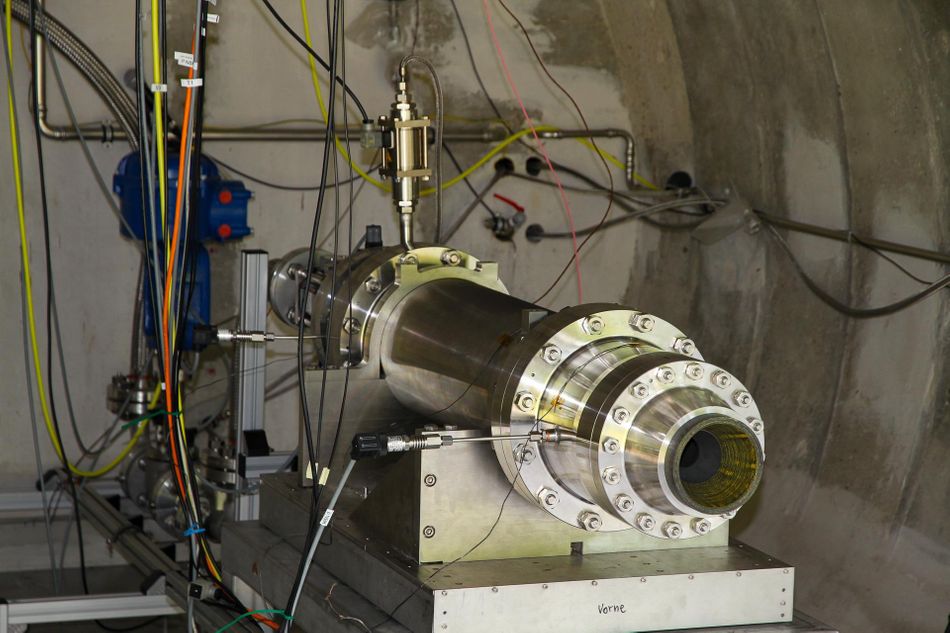 What are hybrid rocket engines?

Hybrid rocket engines are combinations of solid and liquid engines and combine the best features of both engine types. The liquid oxygen carrier required for combustion – in this case highly concentrated hydrogen peroxide – and the solid fuel hydroxyl-terminated polybutadiene (HTPB) are present in VISERION in different physical states and only react with each other at high temperatures and pressures in the combustion chamber. The advantage is that, as a result, there is no risk of explosion during storage and operation. Furthermore, the substances used are non-toxic and not environmentally unfriendly.

In contrast to other oxidiser-fuel combinations used in hybrid engines, the use of hydrogen peroxide as an oxidiser has some significant advantages. For example, its use allows for noticeably more compact engines than those that use liquid oxygen. The flat curve of the specific impulse allows for improved controllability, and simple ignition by catalysis eliminates the need for an igniter as an additional component. The significantly lower combustion chamber temperature and the resulting lower structural requirements also result in a weight saving regarding the thermal protection systems. Furthermore, the hydrogen peroxide used here is easier to handle and store than, for example, the liquid oxygen normally used.

During the test runs at the experimental facility at DLR's Trauen site, the catalytically decomposed hydrogen peroxide entered the combustion chamber at approximately 650 degrees Celsius. The heat released was converted into kinetic energy – providing approximately 12,000 newtons of thrust. In the process, VISERION consumed almost the entirety of the fuel over a period of 27 seconds and, similar to AHRES-B, achieved a significantly increased burn rate compared to earlier hybrid rocket engines. The latter fact is important for the design of an efficient and compact engine and was also achieved in VISERION using an innovative, twisted 'fin geometry'.

The test stand in Trauen is equipped with numerous modern measuring and control facilities and enables the safe test operation of hybrid rocket engines. The infrastructure for the safe, environment-friendly handling of large quantities of hydrogen peroxide is the only one of its kind in Germany.

"The functional verification is an essential milestone on the way to a flight-capable combustor in lightweight construction with a supporting structure made of carbon fibre reinforced polymers (CFRP)," adds Eggers. "The flight-capable variant is being further developed under the name VISERION+ and can serve as a hybrid upper stage for future high-altitude research experiments."