The power of the sun, wind and sea may soon combine to produce clean-burning hydrogen fuel, according to a team of Penn State researchers. The team integrated water purification technology into a new proof-of-concept design for a sea water electrolyzer, which uses an electric current to split apart the hydrogen and oxygen in water molecules.

This new method for “sea water splitting” could make it easier to turn wind and solar energy into a storable and portable fuel, according to Bruce Logan, Kappe Professor of Environmental Engineering and Evan Pugh University Professor.

“Hydrogen is a great fuel, but you have to make it,” Logan said. “The only sustainable way to do that is to use renewable energy and produce it from water. You also need to use water that people do not want to use for other things, and that would be sea water. So, the holy grail of producing hydrogen would be to combine the sea water and the wind and solar energy found in coastal and offshore environments.”

Despite the abundance of sea water, it is not commonly used for water splitting. Unless the water is desalinated prior to entering the electrolyzer — an expensive extra step — the chloride ions in sea water turn into toxic chlorine gas, which degrades the equipment and seeps into the environment.

To prevent this, the researchers inserted a thin, semipermeable membrane, originally developed for purifying water in the reverse osmosis (RO) treatment process. The RO membrane replaced the ion-exchange membrane commonly used in electrolyzers.

“The idea behind RO is that you put a really high pressure on the water and push it through the membrane and keep the chloride ions behind,” Logan said. 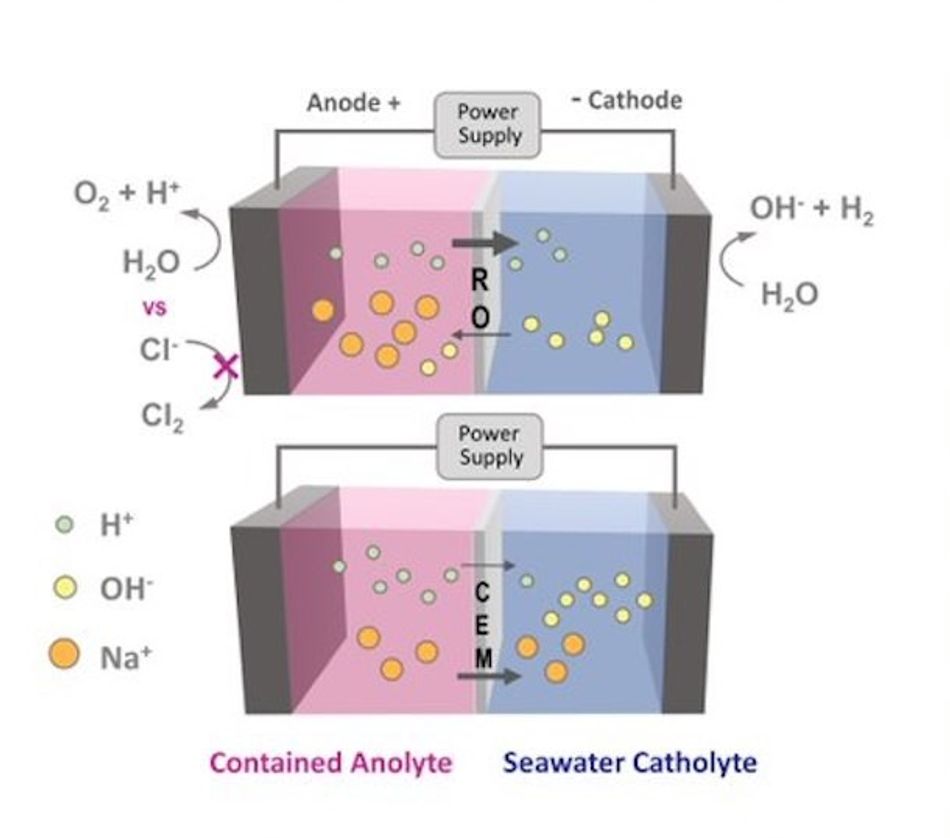 ﻿Here is a visual representation of how ion movement is affected by a reverse osmosis (RO) membrane versus a cation-exchange membrane. Chloride ions from the seawater are not able to pass through the RO membrane and oxidize into chlorine gas. Image: Logan Research Group

In an electrolyzer, sea water would no longer be pushed through the RO membrane, but contained by it. A membrane is used to help separate the reactions that occur near two submerged electrodes — a positively charged anode and a negatively charged cathode — connected by an external power source. When the power is turned on, water molecules start splitting at the anode, releasing tiny hydrogen ions called protons and creating oxygen gas. The protons then pass through the membrane and combine with electrons at the cathode to form hydrogen gas.

With the RO membrane inserted, seawater is kept on the cathode side, and the chloride ions are too big to pass through the membrane and reach the anode, averting the production of chlorine gas.

But in water splitting, Logan noted, other salts are intentionally dissolved in the water to help make it conductive. The ion-exchange membrane, which filters ions by electrical charge, allows salt ions to pass through. The RO membrane does not.

“RO membranes inhibit salt motion, but the only way you generate current in a circuit is because charged ions in the water move between two electrodes,” Logan said.

With the movement from the bigger ions restricted by the RO membrane, the researchers needed to see if there were enough tiny protons moving through the pores to keep a high electrical current.

“Basically, we had to show that what looked like a dirt road could be an interstate,” Logan said. “We had to prove that we could get a high amount of current through two electrodes when there was a membrane between them that would not allow salt ions to move back and forth.” 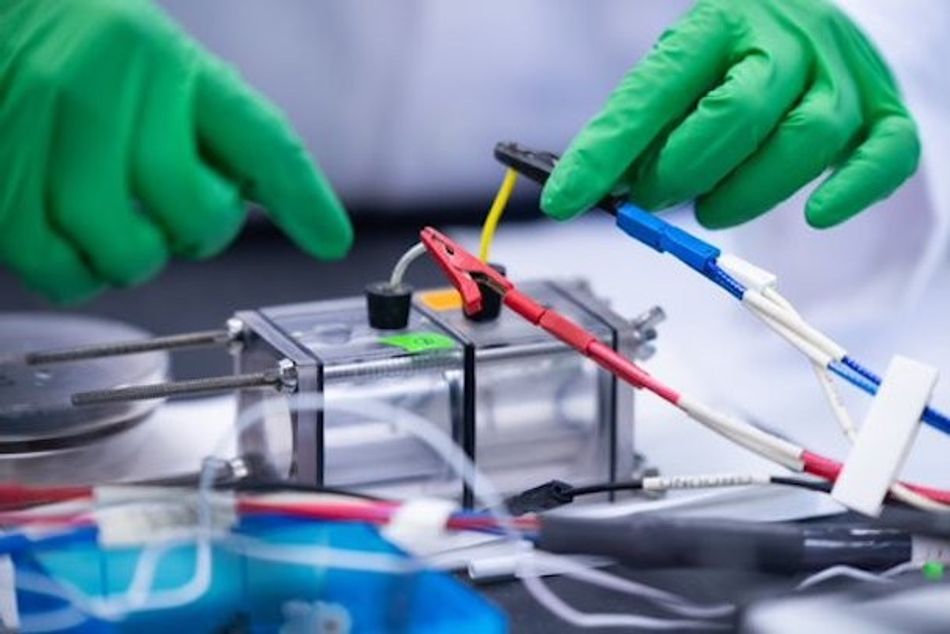 Sea water can be converted into hydrogen fuel using this design for a sea water electrolyzer, according to Penn State researchers. Image: Tyler Henderson

Through a series of experiments recently published in Energy & Environmental Science, the researchers tested two commercially available RO membranes and two cation-exchange membranes, a type of ion-exchange membrane that allows the movement of all positively charged ions in the system.

Each were tested for membrane resistance to ion movement, the amount of energy needed to complete reactions, hydrogen and oxygen gas production, interaction with chloride ions and membrane deterioration.

Logan explained that while one RO membrane turned out to be a “dirt road,” the other performed well in comparison to the cation-exchange membranes. The researchers are still investigating why there was such a difference between the two RO membranes.

“The idea can work,” he said. “We do not know exactly why these two membranes have been functioning so differently, but that is something we are going to figure out.”

Recently, the researchers received a $300,000 grant from the National Science Foundation (NSF) to continue investigating sea water electrolysis. Logan hopes their research will play a critical role in reducing carbon dioxide emissions around the world.

“The world is looking for renewable hydrogen,” he said. “For example, Saudi Arabia has planned to build a $5 billion hydrogen facility that is going to use sea water. Right now, they have to desalinate the water. Maybe they can use this method instead.”