Sustainability and environmental compatibility are becoming increasingly important considerations in the space sector. In order to achieve these objectives, scientists at the German Aerospace Center (DLR) in Lampoldshausen are developing fuels for next-generation space applications.

Sustainability and environmental compatibility are becoming increasingly important considerations in the space sector. In order to achieve these objectives, scientists at the German Aerospace Center (Deutsches Zentrum für Luft- und Raumfahrt; DLR) in Lampoldshausen are developing fuels for next-generation space applications. The focus is on application-related properties such as improved environmental compatibility, safety, behaviour at different temperatures and reduced costs. "Choosing the correct chemical components is vital if we are to meet the strict requirements for new types of fuels," says Dominic Freudenmann, Head of the Chemical Propellant Technology Department at the DLR Institute of Space Propulsion. DLR scientists are therefore conducting research into innovative chemical concepts in their laboratories, and systematically comparing these with one another to develop ideal new propellants for spaceflight. This is based on a diverse array of syntheses between already existing materials and new substances, such as ionic liquids. Two new propellant combinations have now been successfully tested. A new and particularly heat-resistant combustion chamber is key to this process.

Propellants that can replace hydrazine (N2H4) are particularly in demand. Hydrazine has been used in space propulsion systems – including on satellites, spacecraft and rocket stages – as a monopropellant, which is a single-component fuel, or as a bipropellant, that is, as part of a combination of a fuel together with an oxidiser. Among hydrazine's many advantages, it is efficient and can be stored for long periods of time. As a monopropellant, it is capable of cold starts. This means that as soon as hydrazine meets a catalyst, it breaks down, releasing chemical energy to power the engine. The disadvantage of hydrazine is that it is toxic and carcinogenic for humans and harmful to the environment. Handling substances such as hydrazine therefore requires extensive safety precautions, which are extremely costly.

DLR researchers are currently conducting two research projects to demonstrate alternatives that are less environmentally damaging but just as effective. Felix Lauck and Michele Negri have successfully tested the green fuel 'Hypergolic Ionic Propellant' (HIP_11) for the first time in a test combustion chamber on the M11 test stand in Lampoldshausen. The propellants are hydrogen peroxide (H2O2) as an oxidiser and an ionic liquid (molten salt) as a fuel. Due to its hypergolic properties, whereby substances self-ignite on contact, HIP_11 has the potential to replace the fuel combination of monomethylhydrazine and dinitrogen tetroxide that has hitherto been used in upper stage engines. This capability does away with the need for complex ignition devices and allows an engine to be ignited multiple times. "We can see applications for HIP_11 in orbital propulsion systems such as those on large satellites or spacecraft," says Negri. "This kind of green fuel combination is of particular interest for human spaceflight missions, as the potential risks of using HIP_11 are much lower than with previous propellant combinations." 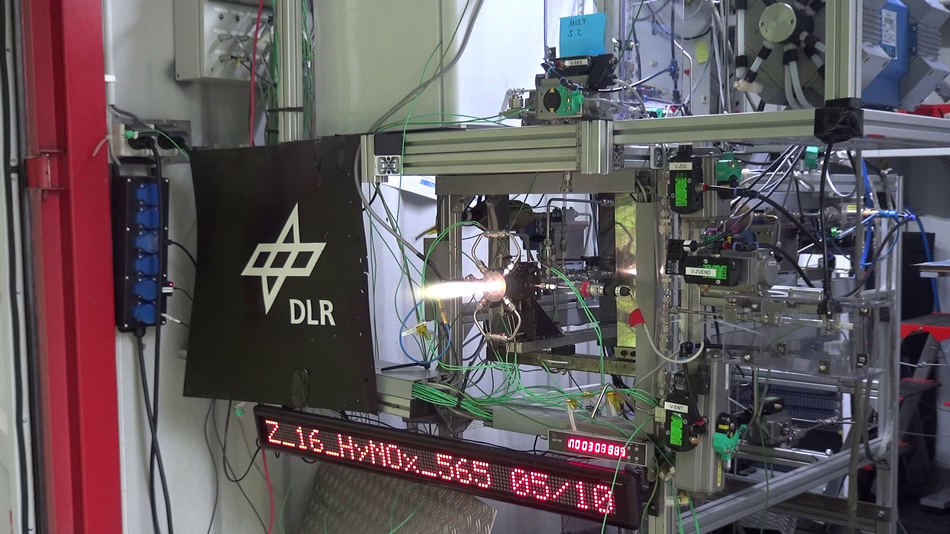 Scientists have also successfully tested a 3D-printed combustion chamber with a green rocket propellant combination for the very first time by deploying a unique method. "Having a whole-system view of innovative combustion chamber design and advanced propellants forms the focus of the work that we are doing as part of the DLR Future Fuels project," says Lukas Werling, Head of the M11 Test Facility. The green rocket propellants 'Hydrocarbons mixed with Nitrous Oxide' (HyNOx) is a DLR-developed mixture of nitrous oxide (N2O) as the oxidiser and ethane (C2H6) or ethene (C2H4) as the fuel. With this type of propellant combination, the oxidiser and fuel are either pre-mixed and stored in a tank, as with a monopropellant, or used in the same way as a conventional bipropellant. This has a number of advantages. Compared with standard monopropellants, HyNOx fuel combinations have a greater specific impulse, which makes them more efficient. At the same time, they are non-toxic and the components are very inexpensive, as they are manufactured on a mass industrial scale and available worldwide. Nitrous oxide and ethane result in high vapour pressure, which is used to deliver the fuel into the combustion chamber. This eliminates the need for external pressurisation of the fuel tank and reduces the complexity of the propulsion system. "Yet in spite of these advantages, there are two challenges to overcome. Firstly, it is important to avoid flashbacks in the combustion chamber feed line and the tank of the spacecraft and secondly, the components must be able to withstand the combustion temperatures of up to 3000 degrees Celsius that occur when HyNOx propellant combinations are burned," says Werling.