Gas leaks at refined oil and/or petrochemical facilities can lead to severe crisis, causing huge financial losses and even leading to casualties. Thorough prevention and inspection, along with immediate remedial measures upon leak detection, are essential. Korea’s no. 1 oil refining company, SK Energy, adopted the use of FLIR optical gas imaging (OGI) cameras at its core facility, the Ulsan Complex, in June 2012.

SK Energy uses a FLIR OGI camera for prevention and post-measures for equipment such as diverse pressure vessels, storage tanks, and pipelines. The system has been applied primarily in the No. 2 fluid continuous catalyst (FCC) for testing of device functions and effectiveness, and the scope of use of the device has been expanded to the entire manufacturing sites at Ulsan Complex.

Currently, the FLIR GF320 OGI camera is positioned as the most essential device for safe inspection at the site. 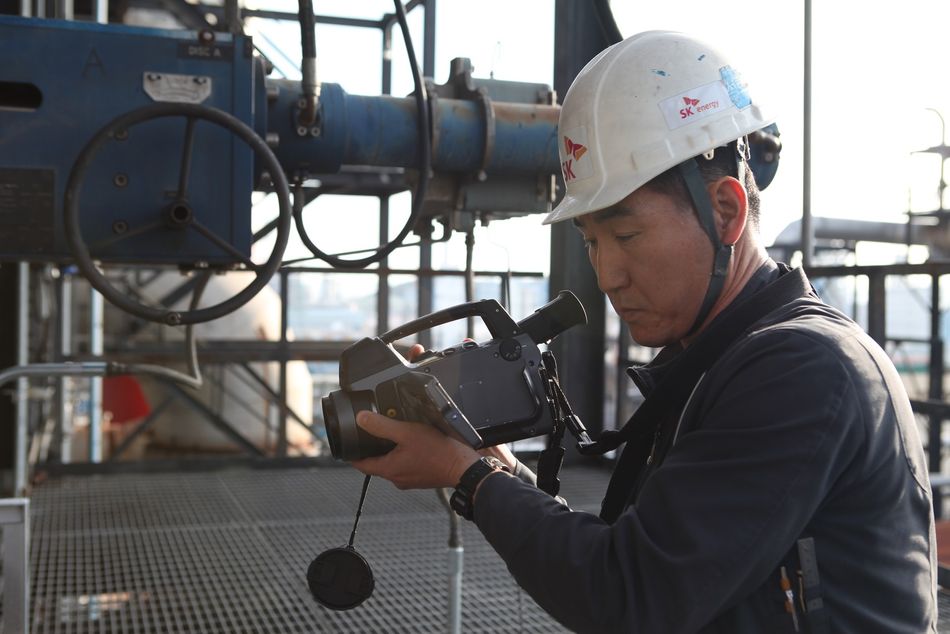 Ulsan Complex, commonly known as Ulsan CLX, is the core facility of SK Energy, the No.1 refined gas company in Korea.

Ulsan CLX was built on 8.3 million m2 land – about the size of 1,156 soccer fields. The facility has storage tanks for 20 million barrels of crude oil and 46,250 km (74,416 miles) of pipe facilities, which is equivalent to a round-trip to the moon and back, and has capability of processing 840,000 barrels of crude oil per day. This is the largest oil refinery in Korea and the third largest in the world. 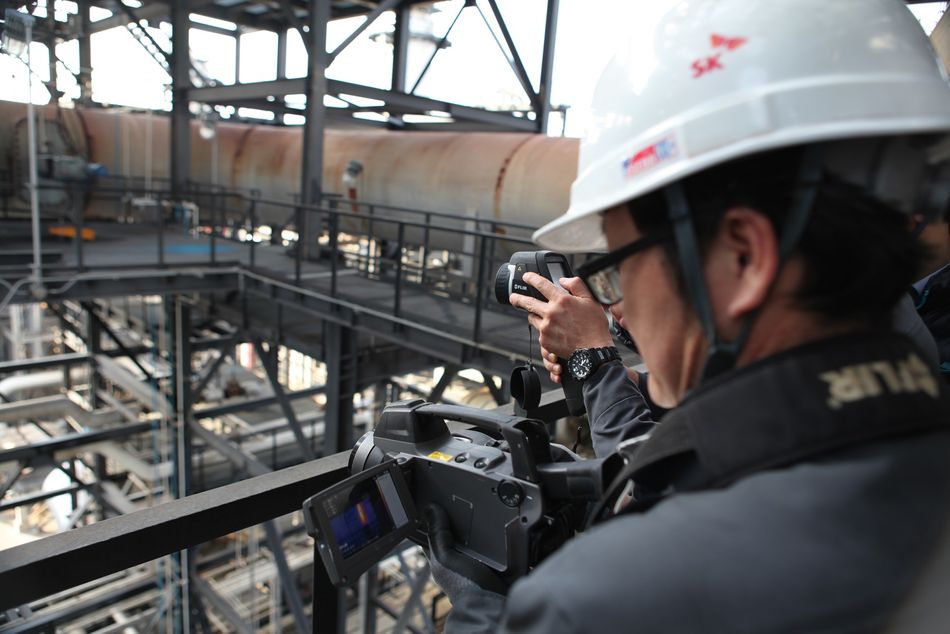 Thorough safety management, prevention inspection, and regular facility maintenance are essential at a refined oil and petrochemical factory of this magnitude, so in 2010 SK Energy established the Safety, Health, and Environment (SHE) division which reports directly to the CEO.

The SHE division conducts basic safety management work as well as removal of harmful or dangerous factors onsite. The division tests on onsite staffs’ understanding of safety, health, and environmental rules. Aside from regular safety management, the division conducts smallscale regular maintenance across facilities once a year and large-scale maintenance once every three or four years.

During the regular check-up period, the SHE division halts the operation partially – stopping the machines and taking apart equipment – in order to perform a thorough inspection and maintenance. For this reason, the production volume of oil and chemicals invariably decreases. However, the company has taken the stance that the advantage of sustainable and safe production outweighs the disadvantage of short term sales reduction, especially since this improves the company’s ability to provide high quality products. The regular check-up is done for eight to nine sites, rotating among the processing sites. Last year, 14 out of 21 facilities went through the regular check-up. A total of 150 partner companies and 270,000 staffs and technicians took part in this regular check-up, which was the largest in 54-years. 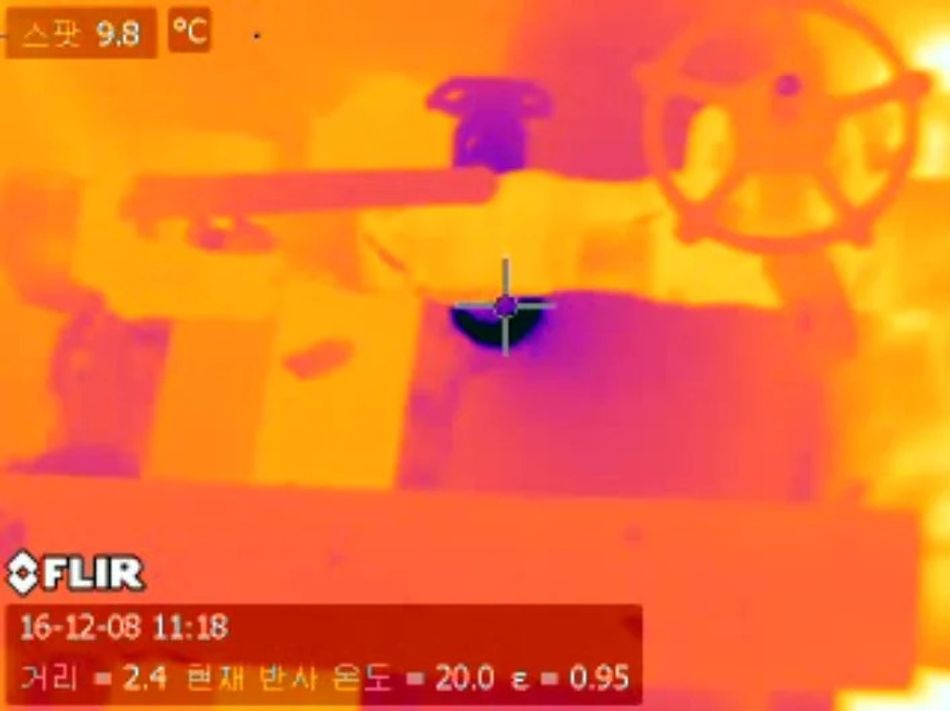 Gas leakage detected with the FLIR GF320. The leak is seen as a translucent light-purple cloud around the darker purple semi-circle at the center of the image.

SK Energy Inspection Team 1 Manager, Bo-lim Lee, explained the company’s test protocols, saying, “We are working on enhancing the facility’s reliability through problem detection, inspection terms and device life span works for fixtures like pressure vessels, storage tanks and pipelines, with focus on No.1 FCC.” He added, “Previously, nondestructive test devices or noncontact inspection devices were used for this, but we came across FLIR Systems’ GF320 OGI camera at the Nondestructive Conference in the end of 2011. We reviewed adopting the system after checking the device features.”

According to Mr. Lee, Ulsan CLX used to apply a toxic vapor analyzer (TVA) for detecting harmful gases at the site. This device is able to check the leakage of harmful gases, but it is not equipped to detect the source of leaks in detail. Also, using the device put the staff at risk since they had to be very close to gas plumes in order to detect them.

In contrast, FLIR GF320 can detect various types of emissions, including harmful gases, from a distance and can also spot the point of the leakage. Furthermore, the camera is able to measure temperature, allowing surveyors to detect hot spots indicative of electrical failure, or estimate tank levels from the outside. The device operates stably amidst various environmental changes such as temperature shifts, is durable, and is easy enough to use with a basic level of training. All these features came as a positive influence for the team to come to the decision of purchasing the device.

After the first purchase of the device in June 2012, FLIR engineers provided the Ulsan CLX teams with two training sessions on the GF320’s features and best practices. Before the real application, No. 2 FCC site was assigned as a sample unit for a pilot test.

“After the training, from July 1 to August 15, we conducted tests on pipe bolt connection parts, valve stems, expansion joints, and a lot more equipment across No. 2 FCC,” said Mr. Lee. “Through this inspection, we were able to analyze the leakage points of three pressure vessels, four storage tanks, and 58 pipelines.”

Based upon the pilot test results of No. 2 FCC, Ulsan CLX extensively expanded the teams’ use of the FLIR GF320. They set priorities for each facility and successfully completed the inspection of facilities after No. 1 FCC site, including the refined oil process, HOU unit, aromatic unit, and olefin production site. In this process, they grasped how an inspection staff could effectively use the device on-site. Ulsan CLX currently uses GF320 not only for the regular facility inspection, but also for the small-scale and large-scale maintenance operations for the entire factory facilities. Visual and thermal images of a hot spot within the pipeline taken with FLIR GF320.

Ulsan CLX officials have said they’re quite satisfied with the features and function of the GF320 camera. They note it has a vast application scope, and is cost-effective when balancing the price of the camera against the high costs of gas leaks.

For Inspection Team 1 manager Lee, a major advantage is time saved. “We often have leakage in the drain or valve joint parts while dismantling and reassembling facilities during the regular maintenance operations,” he explained. “Since the leaked gas is colorless most of the time, detection is difficult, but with GF320, it is very easy to detect the leaking parts.”

Once repairs are made, the systems are checked again with the GF320 to confirm the equipment is leak-free and the area is safe.

Because the GF320 is calibrated to measure temperature, the Ulsan CLX inspection teams also use the camera to find mechanical faults in equipment and systems. For example, the GF320 played a critical role in detecting a problem caused by flames in lagging material that wraps around a 60-inch pipeline connecting the effector and the tower. Since these facilities should maintain a high temperature above 700°C (1292°F) internally, the refractory is supposed to wrap around the pipeline for insulation and heating. But, as time passes, the refractory can deteriorate or develop gaps. These problems are often not visible from outside, making them impossible to detect with the naked eye. 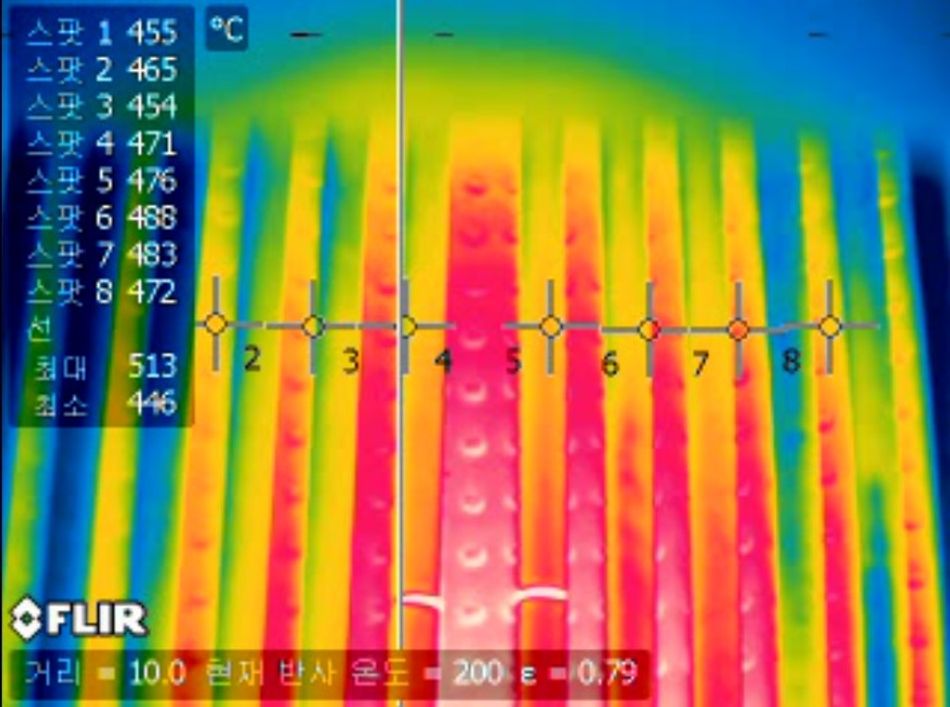 FLIR GF309 thermal imaging camera uses special filters that allows it to see through the flames; this way it can detect the internal parts of a boiler or heater.

The Ulsan CLX teams found these problems were easy to detect using the GF320. According to Mr. Lee, “Aside from No. 1 FCC and No. 2 FCC, GF320 is used for almost all facility detection work at Ulsan CLX. Even some subsidiaries of SK Energy are renting the device, so the camera is being used most of the time.”

The GF320 isn’t the only FLIR product used in facility safety management at Ulsan CLX. SK Energy employs a variety of thermal imaging cameras, including the FLIR GF309, the T420, and the E60.

The FLIR GF309 is specially filtered to see through flame, allowing inspectors to survey the insides of boilers and heaters. Recently, an SK Energy subsidiary was using FLIR GF309 to inspect a heater tube and discovered a hot spot due to coking. The subsidiary used the GF309 for constant monitoring and adjusted the heater flame level for ongoing operation. The camera allowed the company avoid possible financial loss caused by operation halt, while at the same time, secured the worker’s safety.

Inspectors use smaller, more portable thermal imaging cameras for routine safety inspections of equipment that generate heat as part of the refining process. The teams currently use the E60 but also recently ran a pilot test of the FLIR C2, which is a highly portable, pocket-sized thermal camera. Once it is proven to be satisfactory, the company plans to distribute this model to the inspection team. 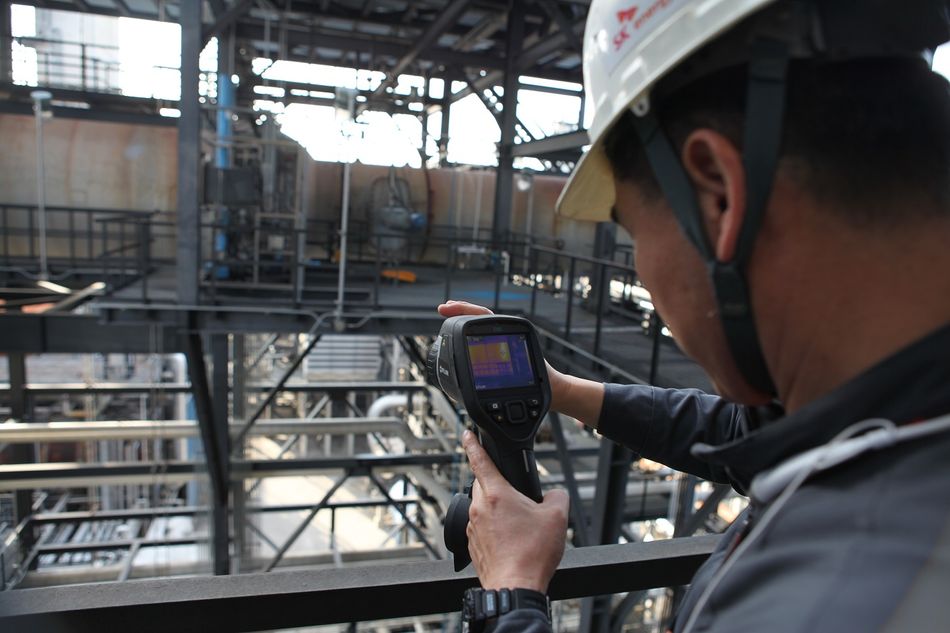 Due to portability and convenience of FLIR E60, the device is widely used for safety checks.

The FLIR OGI cameras and thermal imaging cameras became the most essential devices for safe inspection at Ulsan CLX. FLIR cameras are also used for small and large-scale maintenance operations of the entire facilities in addition to regular facility inspection, enabling Ulsan CLX to increase efficiency of inspection and maintenance.

Especially, FLIR cameras not only help the company secure workers’ safety by detecting the invisible risks to the naked eye such as gas leakage, but also reduce time and cost for maintenance significantly by enabling it to sustain the operation with immediate remedial measures.

FLIR has provided incident detection technology for the 360m-long Brynglas tunnels in South Wales (UK). A combination of smart visual and thermal cameras will notify tunnel operators of any potential hazard or incident occurring within the tunnel.

Choosing the Right Thermal Imager for Your Integrated Project

Adding thermal imaging sensors to your next project can give your customers the ability to see the unseen and expand their senses into the unknown.