Photo by CDC on Unsplash

In the human body, fibrous proteins provide structural support for cells and tissues and aid in biomechanics. Collagen makes up 80% of our skin and 10% of our muscles, while fibrinogen helps in blood clotting by forming the hydrogel fibrin.

Gudapati and fellow researchers report, in Soft Matter, for the first time that fibrous proteins form a solid layer on the surface of water due to aggregation of proteins at the air/water interface. This solid layer interferes with accurate measurements of the solution’s rheology, which is the study of fluid properties such as flow. Previously, it was only demonstrated that the other main type of protein, globular proteins, formed these solid layers at the air/water interface.

Accurate rheology measurements are vital for successful bioprinting. Measurement of viscosity is important for identifying what protein solutions are potentially printable, and for detecting inconsistencies in flow behavior among different batches of fibrous proteins. 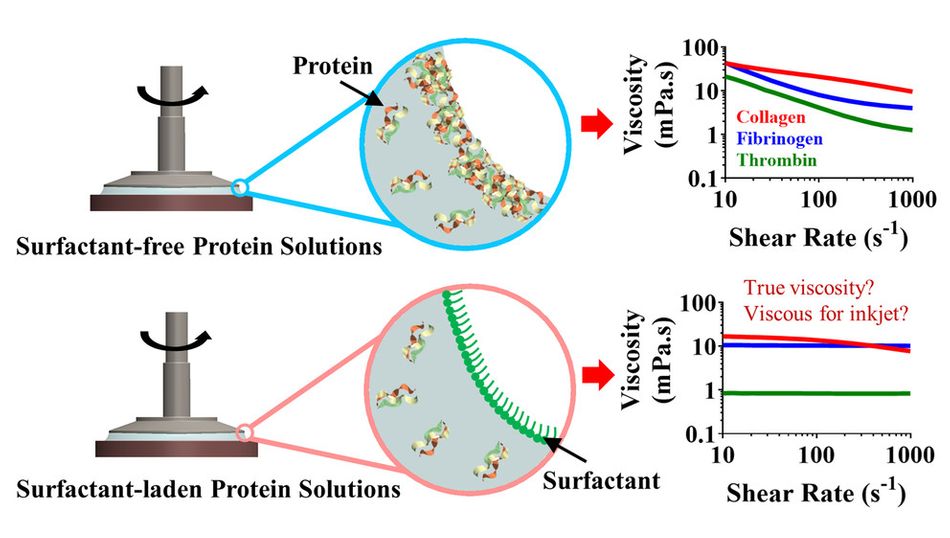 Collagen and fibrinogen in aqueous solutions form a solid layer on the surface of water, corrupting flow behavior measurements with rotational rheometers. The addition of a non-ionic surfactant in small volumes prevents the formation of the solid layer, allowing accurate estimation of flow behavior of the solutions. Image: Hemanth Gudapati, Penn State

“Collagen and fibrinogen are extracted from animals, and their flow behavior changes from batch to batch and with time,” Gudapati said.

This in turn leads to a challenge for consistent bioprinting results.

“Accurate measurement of flow behavior helps in reliable or consistent delivery of the protein solutions during bioprinting,” Gudapati said. “This helps in fabrication of things such as reliable organ-on-chip devices and disease models.”

A potential solution for accurate measurement is to add a surfactant such as polysorbate 80 to prevent the formation of film at the air/water interface.

The research also identifies the concentrations of protein solutions which are potentially printable via inkjet bioprinting, along with identifying bioprinting operating parameters.

Gudapati said there were other findings in their research that will require further investigation. These included the possibility that the aggregated fibrous proteins at the air/water interface may get released from the interface and that these protein aggregates may cause further accumulation of the proteins in the solutions.

“The further bulk aggregation could be one of the reasons for poor alignment of collagen fibers or poor mechanical strength of fibrin outside the body, i.e., in vitro, which are the challenges facing tissue engineering applications at present,” Gudapati said.

The work was done in the lab of Ibrahim Ozbolat, Hartz Family Career Development Associate Professor of Engineering Science and Mechanics, in collaboration with Ralph Colby, professor of materials science and engineering and chemical engineering.

“Dr. Colby’s work with globular protein solutions influenced our work,” Gudapati said. “For example, we realized that the fibrous proteins could be behaving similar to globular proteins at the air/water interface at the beginning of our research.”

Along with Colby, Ozbolat and Gudapati, other authors of the Soft Matter paper include Daniele Parisi, graduate student in materials science and engineering.

A new twist on 2D materials may lead to improved electronic, optical device...

Young scientists proposed a new type of optical nano-sensors. Their operating principle is based on the interaction of light in thin films: a similar effect can be observed in soap bubbles. Such sensors can be quickly manufactured using an inkjet printer and special ink made of titanium dioxide.

As we look to build squishy, human-friendly machines that have the look and feel of soft natural organisms, we need to look beyond the rigid materials used to create electrical switches and circuits.