Frank Pena and Jonathan Lopez work on securing a Fiber Optic Sensing System unit developed at NASA’s Armstrong Flight Research Center in California. The unit is one of five developed to test a new variant of the technology researchers have developed to withstand the harsh environments of a rocket launch and space travel. Credits: NASA Photo / Ken Ulbrich

Allen Parker, Fiber Optic Sensing System (FOSS) senior research engineer at NASA’s Armstrong Flight Research Center in California, explains how FOSS in aeronautics is used on a wing to determine its shape and stress on its structure. In addition, Jonathan Lopez explains how a new FOSS unit variant designed for use in space applications will be sent to NASA’s Langley Research Center in Virginia to determine if the new technology can withstand the harsh environments of a rocket launch and space travel. Credits: AFRC TV

NASA will soon test an enhanced system that can take thousands of measurements along a fiber optic wire about the thickness of a human hair for use in space. In the future the technology could monitor spacecraft systems during missions to the Moon and landings on Mars.

The Fiber Optic Sensing System (FOSS) was developed at NASA’s Armstrong Flight Research Center in California to collect strain and other measurement data for aircraft. It is being adapted for use in spacecraft, where its potential uses could include temperature and strain information critical to space flight safety, said Allen Parker, Armstrong FOSS senior research engineer.

Four space FOSS will undergo five months of environmental testing at NASA’s Langley Research Center in Hampton, Virginia. The tests will prove space FOSS can withstand the severe conditions of a rocket launch.

“Rockets and spacecraft are very complex systems and have a multitude of different parameters to be measured and we want to keep the first uses of space FOSS simple,” Parker said. “The new space-rated FOSS will measure distributed temperatures on the Low-Earth Orbit Flight Test of an Inflatable Decelerator, or LOFTID.”

Much of the technology effort to advance FOSS for use on rockets was funded by the Space Technology Mission Directorate’s Center Innovation Fund. 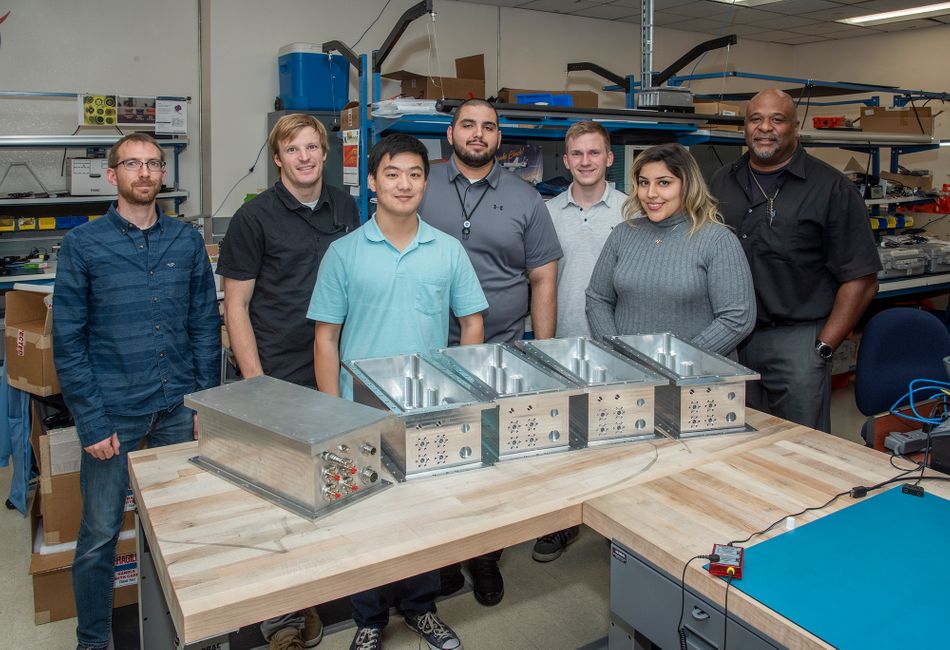 One of the four FOSS units going to Langley for testing is slated for use on the LOFTID. The aeroshell, which is less rigid than a head shield, is designed to decelerate and protect heavy payloads from the intense heat of atmospheric re-entry.

“We will be monitoring temperatures on the back side of the inflatable decelerator,” Parker said. “In measuring those temperatures, we will give the engineers a thermal map of how the decelerator is heating up.”

In preparation for that, the team is working on a space FOSS experiment that will travel as a self-contained experiment on a Blue Origin New Shepard rocket though NASA’s Flight Opportunities program. Armstrong’s engineering development unit (EDU) of the system, which is separate from the four space-rated FOSS boxes heading to Langley, will fly on the suborbital rocket.

“It’s a risk reduction opportunity for us to put our EDU system on the flight early on,” Parker said. “We will measure strain and temperature with the EDU in our own locker on the vehicle.”

“In addition to the electronics, a mission-critical commercial grade laser in the box is mechanically isolated and dampened to increase operability onboard the research vehicle,” Parker explained. “The system also was developed to dissipate heat developed by the unit’s electronics and by way of conduction, or moving the heat away from the unit, due to a lack of air in space. The system will be self-contained and essentially ready for plug and play use.

The other three FOSS boxes going to Langley are slated for use by the Launch Services Program at NASA’s Kennedy Space Center in Florida in partnership with United Space Alliance on a flight of its Vulcan rocket. 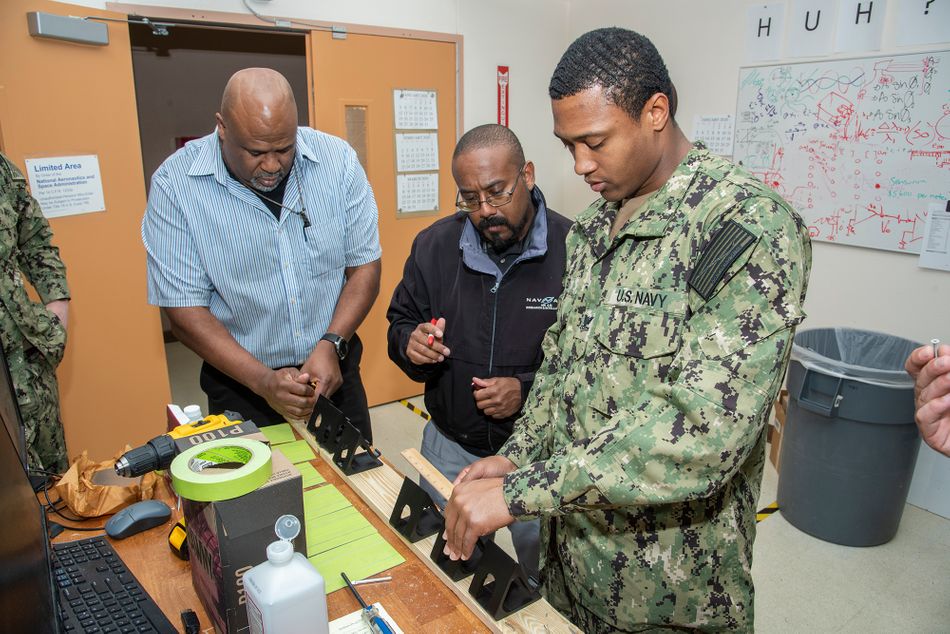 Once FOSS is rated for use in space, the Advanced Cislunar and Surface Capabilities (ACSC) enhanced tempFOSS sensor could be used to support the Artemis missions to monitor distributed cryogenic fuel temperatures

“A fiber optic sensor that can withstand extreme conditions to measure distributed temperatures in a cryogenic environment is a key requirement,” Parker said. “The other element of that is to develop a small, economical and hardy FOSS version. A new technology based on a temperature-tuned laser (TempTuned FOSS) is under development to accomplish that task.”

The team is improving upon the sensor fabrication techniques and discussing performing a potential test of the sensors at NASA’s Ames Research Center in California to support the study of the new technology. In addition, the team is working on software updates for the TempTuned FOSS unit.

“Launch vehicles have a number of different thermal and mechanical subsystems,” Parker said. “Once space FOSS is vetted, we envision a system that will provide measurements of many different kinds of parameters. We imagine the use of FOSS technologies on the cryogenic tanks, not just on the outside of the tank but possibly also on the inside to measure fuel level.” 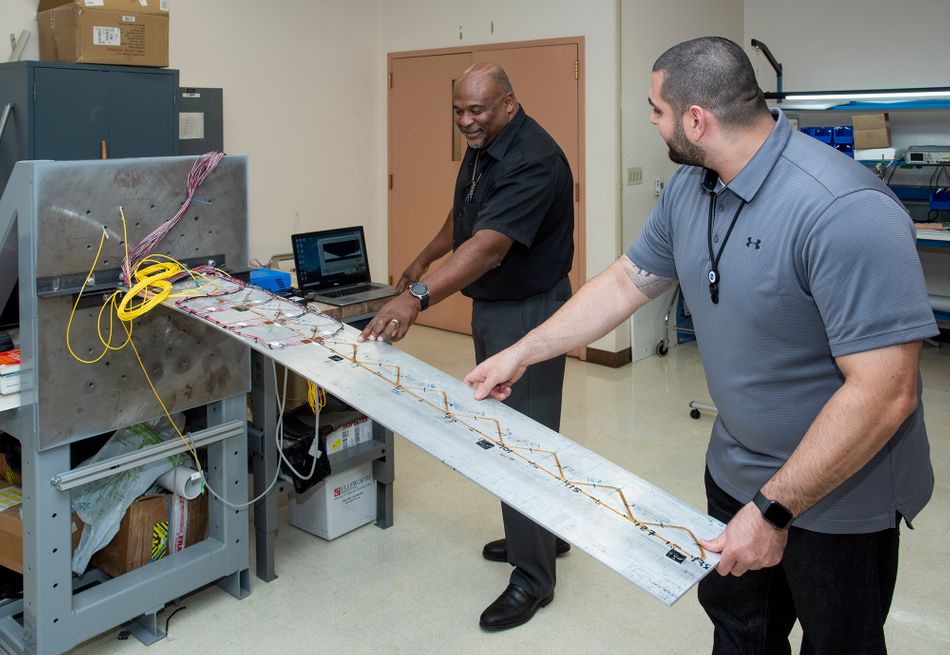 The Armstrong FOSS team also is developing the next generation of FOSS systems called microFOSS, which is a much more compact, economical and robust and potentially could also be used in space.

“The effort is in partnership with the U.S. Navy and has expanded to other organizations within the Navy to include monitoring the stress loading on its vessels that transport a heavy load, such as aircraft and tanks, Parker explained. The Navy wants to monitor stress loading on the hulls and decks of those vehicles.

In addition, a capability to monitor power buses that provide large amounts of current to the ship’s systems is desirable. Corrosion due to a seaward environment impacts the reliability of those buses and the Navy wants a health monitoring system that will let them know when and where unfavorable conditions are emerging. TempTuned FOSS is being considered as a possible solution because this application does not require high data rates. Navy personnel can look at the thermal mapping along the length of the power buses and see if there are any variations that could be an indication of corrosion.

“The microFOSS may expand the uses of the fiber optic system because of its condensed packaging, capability and lower production costs,” Parker said. “A number of different industries such as oil, gas, dairy and medical have inquired about a simpler system that can help with a number of different applications.”

No matter what the application, Parker and his team are working on solutions.