Lawyer, publisher, co-founder of restaurant platform IENS, founder of the entrepreneurial platform The Next Women, fund director and founder at Borski Fund and supervisory director at Schiphol, Rabobank and Mediahuis. And this is only the brief summary of Simone Brummelhuis's career. In 2019 she was named the most influential woman in Dutch business by magazine Opzij. “My best tip? You can do everything on your own, but together you will achieve the greatest things.”

Simone never talks about her private life in interviews. "Are you going to pretend you're alone in your interview again?", her husband Frank Leijdesdorff said recently. Simone smiles. He has a point. Interviews are so often about her career, that her private life is no longer mentioned. Simone and her husband have three adult daughters, who each pursue their own career and studies in the medical sector and the technical sector. "I am so proud of them.”

And what do they think of their entrepreneurial mother? “I think they really enjoy my career. I work very hard. And I also motivated them to build a career themselves.” And that has paid off, because in addition to their studies, Simone’s daughters are very entrepreneurial. One daughter has started an investment club for young women (Dutchess Capital), and another organizes Sunday Saloon Sessions, where students talk about the news. “That is really fantastic to see. Especially the way they set it up. They focus a lot on social media, such as Instagram, to make sure they reach a lot of people. In my time, the focus was not on marketing and branding, it was all about the content. Now it’s more about both, and that’s inspiring to see.”

The mentor and the promoter

Innovation is the common thread in Simone Brummelhuis’s career. “If you don’t renew, you stand still.” However, Simone was allowed to make challenging decisions in a familiar environment around her. “I still work with people I worked with 10 years ago. We have built a relationship on trust. And that gives a lot of support.”

Is that also what you want to pass on to other entrepreneurs? Gather good people around you? “Definitely. Do it together, and not alone.” Also important according to Simone: make sure you have positive and critical voices around you. “You need a mentor and a promoter. A mentor who occasionally talks to you critically about how things can be improved. And a promoter who shows you how great you are doing. You need them both.”

Simone's new challenge is the Borski fund, of which she is director and founder. The Borski Fund invests in technology companies that reduce the gender gap. Less than 5 percent of all Venture Capital investment go to diverse teams made up of both males and females. Only 1 percent is invested in all-female teams. This leaves 94 percent of VC investments that end up at all-male teams. At the same time, research shows that diverse teams are more innovative and perform better overall. 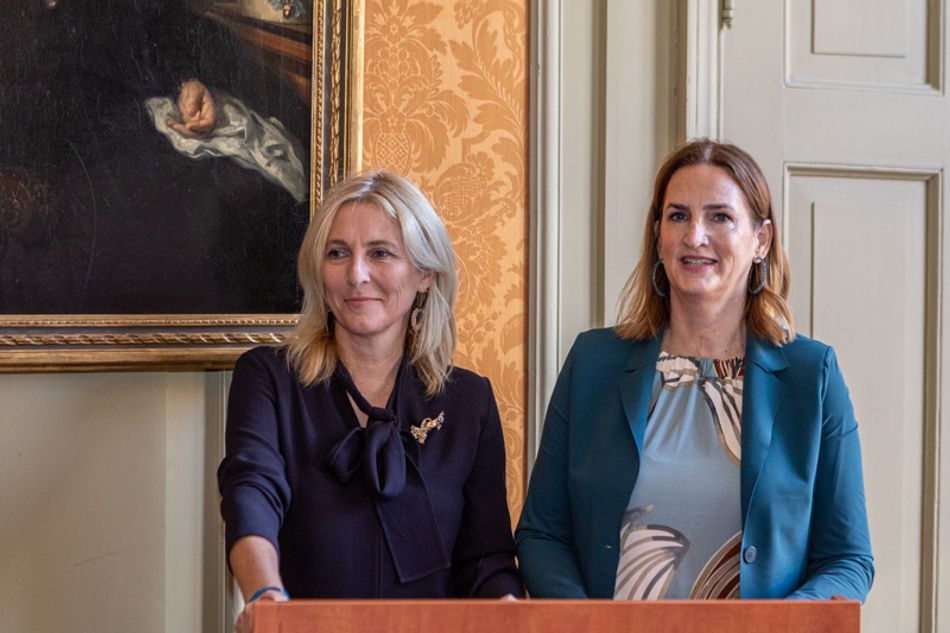 Simone Brummelhuis & colleague Laura Rooseboom at the launch of the Borski Fund in 2019.

When do you invest? “We analyze teams with our proprietary scientific model Human Capital Scan. If a company fails, it is often due to the team, in about 70 percent of the cases. So there is a lot to be gained there. We pay attention to the founders, the interaction in the team, and the expertise they have in house. We analyse the teams, and then go through the results with them." Borski Fund has already reviewed 300 high quality teams.

"What we often see is that a new company is started up by like-minded people. That is not bad, nor is it crazy. You start with people who are close to you, and also get enthusiastic about the idea. These people often look alike. Often you are not critical of that, because you are happy that someone is just as enthusiastic as you. But you need diversity to make your team succeed.”

Borski Fund as a catalyst

The Borski Fund was founded to give women a fairer chance in the world of the VCs. “We want to show that there is an opportunity to invest in these talented women. Many of them come to us with good plans. It would be a shame if we’re not going to produce more inclusive innovations, because there is no investment in women. That is not an option!

You know a lot of investors. Is there more talk among investors about the gender gap? “Yes there is. They do want to invest more in women, but it still takes too much time. The Borski fund is also intended as a catalyst, like: here they are, talented women with great companies. We already invest in them. Now it’s your turn!"

Often recognized as the smartest square km in Europe, High Tech Campus Eindhoven is built around an ecosystem of 235 companies with a range of application fields. Home to over 12.000 innovators, researchers, engineers that create the technologies and business of tomorrow. The Campus plays an orche... learn more