by Dave Lee, Director of Product Management, RE2 Robotics

Commercial diving is one of the most dangerous professions in the world. In fact, OSHA classifies commercial diving as a high-risk occupation with a “very high rate” of fatality and injury. While commercial divers take numerous precautions to ensure their safety, accidents still happen. Despite the inherent risks, numerous industries require skilled divers to perform underwater maintenance and repair tasks, such as the maintenance and inspection of offshore oil rigs and pipelines, as well as the construction and repair of bridges, piers, and dams.

The hazards faced by commercial divers are often amplified by the limited amount of time that humans can safely remain underwater. Using helmet air, commercial divers can safely dive approximately 60 meters (~200 feet). Using mixed gasses, commercial divers can reach 90 meters (~295 feet), but OSHA only allows scuba diving to those depths under limited conditions. Human divers have tested these limits and have “gone deeper,” of course—the world record for the deepest dive, set in 2014, was around 309 meters—but the diver emptied nine scuba tanks and spent approximately 14 hours on decompression stops in the process. Humans who attempt to dive to depths greater than 60-90 meters can experience decompression sickness (aka “the bends”), as well as tissue damage and other physical injuries related to extreme pressure changes.

Despite these limits, offshore production continues to surge ahead, reaching new ocean depths. Buoyed by technology, large-scale oil and gas companies, for example, are now exploring production at 6,000, 7,000 and even 10,000 feet of sea water. Additionally, green energy wind farms are increasingly deployed offshore and require the same inspections and maintenance as other marine infrastructure.

This is where the use of robotics comes into play. ROV and AUV systems have been in use for some time, enabling the use of exploration well beyond the limits of human divers. These underwater vehicles are even more useful when integrated with robotic arms that can mimic the actions of a human diver and interact with the underwater infrastructure. RE2 Sapien Sea Class™ provides human-like capability in complex underwater environments, enabling operators to perform a multitude of deep-ocean inspection and maintenance tasks and reducing the need to put divers in the water, especially at depth, where the dangers increase and durations allowed for remaining on scene decrease. 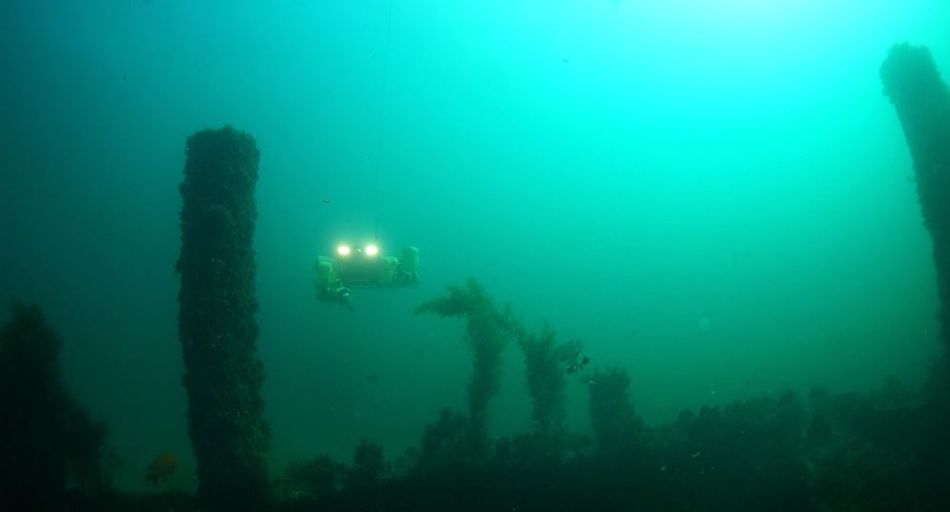 RE2 Sapien Sea Class can exceed depths of 300 meters.

Unlike human divers, the RE2 Sapien Sea Class system can stay submerged for hours at a time at depths exceeding 300 meters of sea water. This means improved productivity by eliminating the need for human divers to repeatedly resurface to replenish their air tanks--and humans, of course, cannot readily dive below 90 meters at all.  Instead, the RE2 system can remain idle on the ocean floor until “awakened” to perform the next task. Trained divers, who are skilled and already familiar with the intricacies of deep ocean exploration, can remain topside to guide operations.

RE2 Sapien Sea Class is a dual-arm system featuring two 6-degree-of-freedom arms that easily integrate with underwater vehicles from major manufacturers.  Its electric, energy-saving system frees up subsea vehicle power to allow cameras and sensors to interrogate the environment for extended periods of time, whether through teleoperation or autonomously via RE2’s computer-vision and machine-learning algorithms, RE2 Detect™ and RE2 Intellect™. Its compact design allows it to operate in precarious areas that are difficult, if not impossible, for traditional underwater systems to access. And, the system is lightweight and portable enough to be managed by a one- or two-person team.

As industries continue to use technology to dive beyond the depths of what is currently possible, RE2 Sapien Sea Class can provide near-human performance at human scale--protecting divers, increasing productivity, and improving ROI.

Dave Lee is RE2’s Director of Product Management. In addition to his years managing commercial products and solutions, Dave is a qualified recreational scuba diver who enjoys diving with his family. His training and experience have helped RE2 focus on products that extend diver capabilities and improve safety in the commercial marine environment.
Jennifer Brozak

The Use of Robotics in the Non-Destructive Testing of Composites

The 5 Keys to Mobile Manipulation: The Ability to Interact

Mobile manipulators give users the ability to automate anywhere