Image by thedanw from Pixabay

Despite recent advances in artificial intelligence (AI) research, human children are still by far the best learners we know of, learning impressive skills like language and high-level reasoning from very little data. Children’s learning is supported by highly efficient, hypothesis-driven exploration: in fact, they explore so well that many machine learning researchers have been inspired to put videos like the one below in their talks to motivate research into exploration methods. However, because applying results from studies in developmental psychology can be difficult, this video is often the extent to which such research actually connects with human cognition.

A time-lapse of a baby playing with toys. Source.

Why is directly applying research from developmental psychology to problems in AI so hard? For one, taking inspiration from developmental studies can be difficult because the environments that human children and artificial agents are typically studied in can be very different. Traditionally, reinforcement learning (RL) research takes place in grid-world-like settings or other 2D games, whereas children act in the real world which is rich and 3-dimensional. Furthermore, comparisons between children and AI agents are difficult to make because the experiments are not controlled and often have an objective mismatch; much of the developmental psychology research with children takes place with children engaged in free exploration, whereas a majority of research in AI is goal-driven. Finally, it can be hard to ‘close the loop’, and not only build agents inspired by children, but learn about human cognition from outcomes in AI research. By studying children and artificial agents in the same, controlled, 3D environment we can potentially alleviate many of these problems above, and ultimately progress research in both AI and cognitive science.

In collaboration with Jessica Hamrick and Sandy Huang from DeepMind, and Deepak Pathak, Pulkit Agrawal, John Canny, Alexei A. Efros, Jeffrey Liu, and Alison Gopnik from UC Berkeley, that’s exactly what this work aims to do. We have developed a platform and framework for directly contrasting agent and child exploration based on DeepMind Lab – a first person 3D navigation and puzzle-solving environment originally built for testing agents in mazes with rich visuals.

What do we actually know about how children explore?

The main thing that we know about the child exploration is that children form hypotheses about how the world works, and they engage in exploration to test those hypotheses. For example, studies such as the one from Liz Bonawitz et al., 2007 showed us that preschoolers’ exploratory play is affected by the evidence they observe. They conclude that if it seems like there are multiple ways that a toy could work but it’s not clear which one is right (in other words, the evidence is causally confounded) then children engage in hypothesis-driven exploration and will explore the toy for significantly longer than when the dynamics and outcome are simple (in which case they would quickly move on to a new toy).

Stahl and Feigneson et al., 2015 showed us that when babies as young as 11-months are presented with objects that violate physical laws in their environments they will explore them more and even engage in hypothesis-testing behaviors that reflect the particular kind of violation seen. For example, if they see a car floating in the air (as in the video on the left), they find this surprising; subsequently, children then bang the toy on the table to explore how it works. In other words, these violations guide the children’s exploration in a meaningful way.

How do AI agents explore?

Classic work in computer science and AI focused on developing search methods that try to seek out a goal. For example, a depth-first search strategy will continue exploring down a particular path until either the goal or a dead-end is reached. If a dead-end is reached, it will backtrack until the next unexplored path is found and then proceed down that path. However, unlike children’s exploration, methods like these don’t have a notion of exploring more given surprising evidence, gathering information, or testing hypotheses. More recent work in RL has seen the development of other types of exploration algorithms. For example, intrinsic motivation methods provide a bonus for exploring interesting regions, such as those that have not been visited as much previously or those which are surprising. While these seem in principle more similar to children’s exploration, they are typically used more to expose agents to a diverse set of experience during training, rather than to support rapid learning and exploration at decision time.

To alleviate some of the difficulties mentioned before in regards to applying results from developmental psychology to AI research, we develop a setup in which we have an exact comparison between children and agent behavior in the exact same environment with exactly the same observations and maps. We do this using DeepMind Lab, an existing platform for training and evaluating RL agents. Moreover, we can restrict the action space in DeepMind Lab to four simple actions (forward, backward, turn left, and turn right) using custom controllers built in the lab, which make it easier for children to navigate around the environment. Finally, in DeepMind lab we can procedurally generate a huge amount of training data that we can use to bring agents up-to-speed on common concepts like “wall” and “goal”.

In the picture below you can see an overview of the parts of our experimental setup. On the left, we see what it looks like when a child is exploring the maze using the controller and the 4 possible actions they can take. In the middle, we see what the child is seeing while navigating through the maze, and on the right there is an aerial view of the child’s overall trajectory in the maze. 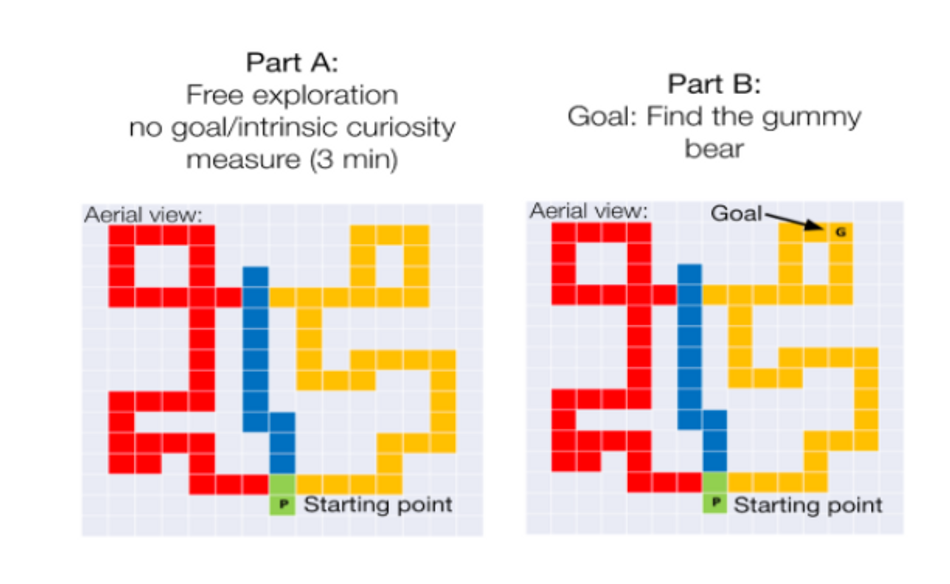 We first investigated whether or not children (ages 4-5) that are naturally more curious/exploratory in a maze are better able to succeed at finding a goal later introduced at a random location. To test this, we have children explore the maze for 3 minutes without any specific instructions or goals, and then introduce a goal (represented as a gummy) in the same maze and then ask the children to find the gummy. We measure both 1) the percentage of the maze explored in the free exploration part of the task and 2) how long, in terms of number of steps, it takes the children to find the gummy after it is introduced. 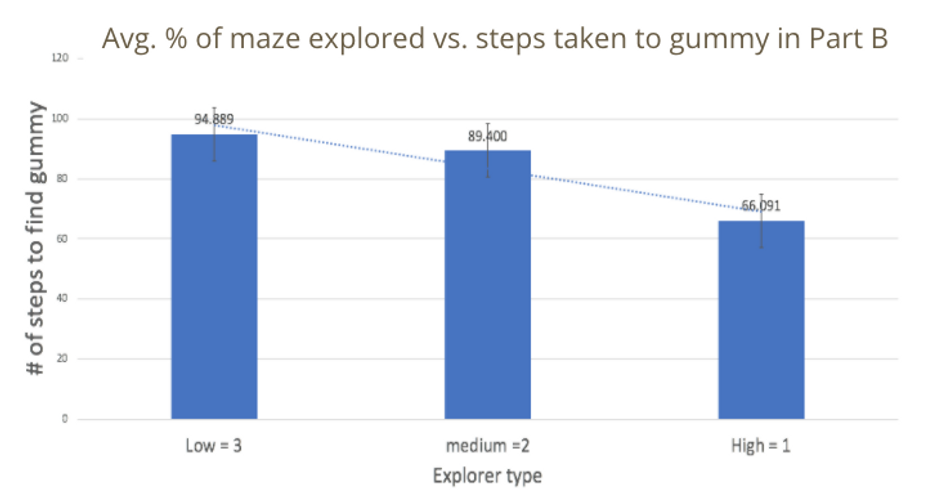 Now that we have data from the children in the mazes, How do we measure the difference between an agent and a human trajectory? One method is to measure if the child’s actions are “consistent” with that of a specific exploration technique. Given a specific state or observation, a human or agent has a set of actions that can be taken from this state. If the child takes the same action that an agent would take, we call the action choice ‘consistent’. Otherwise the action would not be consistent. We measure the percentage of states in a child’s trajectory where the action taken by the child is consistent with an algorithmic approach. We call this percentage “choice-consistency.”

One of the simplest algorithmic exploration techniques is to do a systematic search method called depth-first search (DFS). From our task, recall that children had a maze in which they first engaged in free exploration, and then a goal-directed search. When we compare the consistency of the children’s trajectories in those 2 settings with those of the DFS algorithm, we find that kids in the free exploration setting take actions that are consistent with DFS only 90% of the time, whereas in the goal oriented setting they match DFS 96% of the time.

One way to interpret this result is that kids in the goal-oriented setting are taking actions that are more systematic than in free exploration. In other words, the children look more like a search algorithm when they are given a goal.

In conclusion, this work only begins to touch on a number of deep questions regarding how children and agents explore. The experiments presented here just begin to address questions regarding how much children and agents are willing to explore; whether free versus goal-directed exploration strategies differ; and how reward shaping affects exploration. Yet, our setup allows us to ask so many more questions, and we have concrete plans to do so.

While DFS is a great first baseline for uninformed search, to enable a better comparison, a next step is to compare the children’s trajectories to other classical search algorithms and to that of RL agents from the literature. Further, even the most sophisticated methods for exploration in RL tend to explore only in the service of a specific goal, and are usually driven by error rather than seeking information. Properly aligning the objectives of RL algorithms with those of an exploratory child is an open question.

We believe that to truly build intelligent agents, they must do as children do: actively explore their environments, perform experiments, and gather information to weave together into a rich model of the world. In this direction, we will be able to gain a deeper understanding of the way that children and agents explore novel environments, and how to close the gap between them.

This blog post is based on the following paper:

Ethics guidelines galore for AI - so now what?

Anna Jobin has investigated together with researchers from the Health Ethics and Policy Lab which ethics guidelines for artificial intelligence already exist, and finds that ethical AI is by no means merely a technical matter.