Chiara Gattinoni, a materials theorist and Marie Curie Fellow at ETH Zurich, uses the “Piz Daint” supercomputer at CSCS to investigate a special class of materials: ferroelectrics. In the future, these materials could constitute the heart of low-energy-consuming, miniaturised data storage in electrical devices. One ferroelectric Gattinoni analysed is, according to her, truly magical.

Today, electronic devices like computers or smartphones rely on two physical principles: electric materials to process information and magnetic materials to store it. However, magnetic data storage consumes a substantial amount of energy, since it requires magnetic fields generated from comparatively large magnets. In contrast, the generation of electric fields requires much less energy, and an electric memory could drastically reduce the energy demand of future electronic devices.

That’s why Marie Curie Fellow Chiara Gattinoni and her colleagues in the materials theory group of ETH professor Nicola Spaldin investigate so-called ferroelectrics. As materials theorists, they aim to design new materials with functionalities that do not yet exist. In this respect, ferroelectrics are of particular interest because they possess a special feature: an inherent electric polarisation that can be reversed by an external electric field. 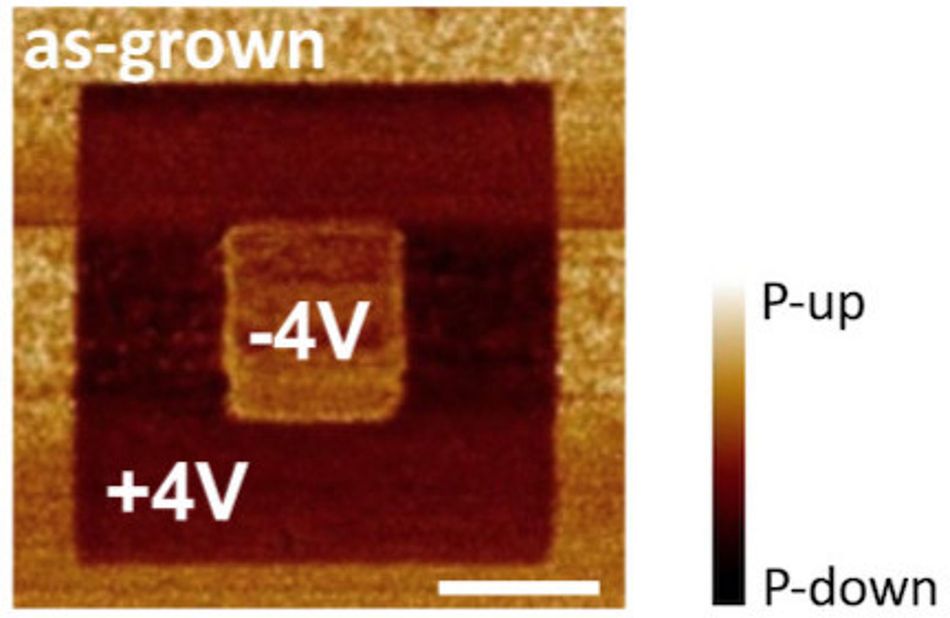 The image shows the tunability of the polarisation of the ferroelectric lead titanate: The material has an upwards pointed polarity (light brown edges). In the dark brown patch, the polarity has been reversed; in the middle patch, the polarity has been re-reversed. (Image: Gattinoni et al. PNAS, 2020) This handy property mostly arises from distortions within the ferroelectrics’ crystal structure. These, in turn, create tiny electric dipoles, whose polarities, plus and minus, can be reversed by a subtle, locally applied electric field. This way, it is possible to manipulate two distinct polarisation states within the material — similar to the 0 and 1 states of a “bit” in magnetic memory devices. “This means that one can ‘write’ on the material with an electric field and use it to store information,” explains Gattinoni.

However, this adaptable polarisation remains robust only to a certain critical thinness of the material, which is a limiting factor for the miniaturisation of electronic systems. Gattinoni’s work provides insight into why the polarisation is lost and how this could be overcome — specifically, how ferroelectric materials could be engineered to sustain stable polarisation even in very thin nano-scale films.

Pinpointing the trouble in thin films

To that end, Gattinoni and her colleagues performed density functional theory (DFT) calculations using the “Piz Daint” supercomputer at CSCS. The scientists probed very thin films, above and below a thinness of only 7 unit cells, and compared the results to experiments performed by their collaborators at the lab for ferroic materials at ETH on a film of lead titanate (PbTiO3) — a prototypical ferroelectric material — placed on a strontium ruthenate metal waver. The combined results offer insights into the cause of the suppressed polarisation.

Two known phenomena contribute to this polarisation loss. One is the so-called depolarising field, which arises from opposite charges on the opposite surfaces of the material — a natural consequence of its dipole moment. These charges create an electric field that is contrary to the direction of the ferroelectric polarisation. The thinner the film, the closer these opposite charges come to one other, and, consequently, the stronger this destructive depolarising field becomes. The second phenomenon arises from the instability of the surface charges, per se. “In practice, the system has to find a way to compensate the surface charges in order to maintain the ferroelectric properties,” explains Gattinoni. Her DFT calculations indicate a way to achieve this even in thin films.

Gattinoni found that, contrary to previous suppositions, the chemical bonding at the interface between the ferroelectric and the underlying metal — in this case a strontium ruthenate layer — does not have a major influence on maintaining polarisation. Instead, the electronic structure and therefore the electrostatic properties of the ferroelectric and the metal layer play the dominant role in the system. “This means that for controlling the polarisation stability, researchers need to engineer the electrostatic properties, rather than focus on the chemical bonding,” Gattinoni says.

Her calculations also gave indications as to where such modifications would have the highest effect on charge compensation. According to the results, charge transfers at the interface between ferroelectric and metal, which had previously been assumed to be vital, really only play a minor role. In contrast, modifications at the ferroelectrics’ surface proved to be significantly more effective. Such modifications could consist of the introduction of structural defects to create vacancies that can adsorb the charges or of charge-adsorbing molecules in a device’s atmosphere. “Both of these methods can be used to stabilise the polarisation, even in very thin ferroelectric films,” Gattinoni says. Ferroelectrics are also expected to have a big impact on the catalysis of certain important chemical reactions. In this context, Gattinoni recently investigated a material that is, as she says, magical: bismuth ferrite. Again, she examined a thin film of the material using DFT calculations on “Piz Daint”, this time to determine its potential in catalysis of water splitting — a chemical reaction that splits water molecules into hydrogen and oxygen and can be used for hydrogen production. Current hydrogen production methods are flawed, being either dependent on fossil fuels or else costly and energy demanding. Therefore, developing more efficient technology for water splitting could lead to an eco-friendly hydrogen economy.

This “magical” property makes the material inert, meaning not likely to induce a chemical reaction. If added to water, for instance, nothing will happen. However, if the ferroelectric polarisation is forcibly reversed by applying an electric field, a massive build-up of surface charges occurs, which, in turn, induces the water molecules to split.

Currently, Gattinonis collaborators are working on the experimental confirmation of the idea. In addition, her results as well as previous work from other scientists indicate that an equivalent setup could also be used to degrade pollutants such as toxic nitrogen oxides (NOx). “We will certainly further explore the potential of ferroelectrics for catalysis.”

Software to speed up training of neural networks

Charged atoms cannot escape from an ion trap, as they are confined by an electromagnetic field. A laser, radio waves or microwaves can then change the state of the charged atoms (ions) in a targeted way, so that they become qubits, the building blocks of quantum computers.