When it comes to increasing electric storage efficiency and electric breakdown strength — the ability of an electrical system to operate at higher voltage and temperatures with great efficiency — increasing one traditionally has led to a decrease in the other. Penn State researchers, led by Qiming Zhang, distinguished professor of electrical engineering, recently developed a scalable method that relies on engineered materials to increase both properties. 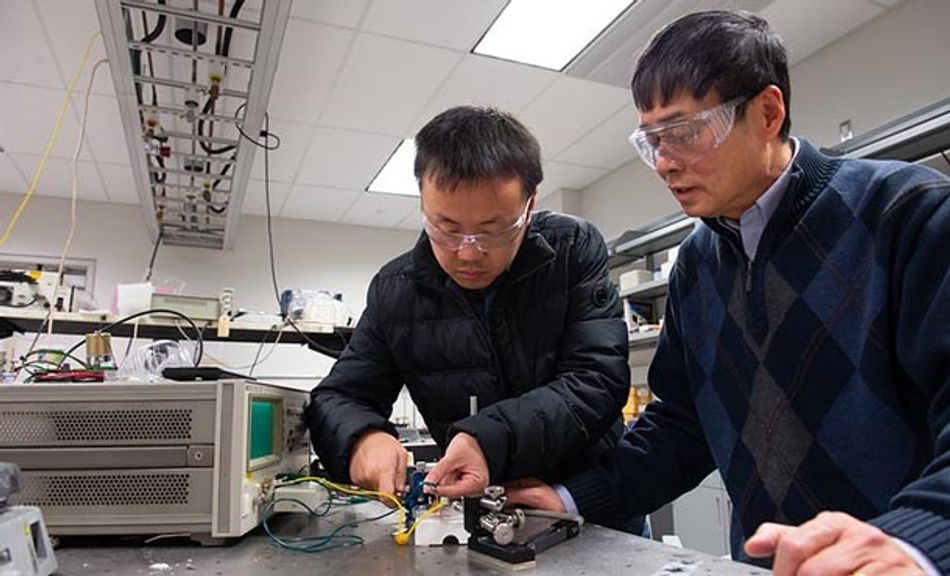 Xin Chen, a doctorate candidate in the Department of Materials Sciences and Engineering at Penn State, and Qiming Zhang, distinguished professor of electrical engineering, test a film capacitor in this photo taken in January. IMAGE: Penn State College Of Engineering

While other researchers have been able to do this for dielectric capacitors, the methods have been too expensive to scale for use with real products. Zhang and the other Penn State researchers reported their results in a recent issue of Science Advances.

“What we have done is to use interface effects in nano-dopants to increase both the storage efficiency and electric breakdown strength with a very small quantity of dopants and at a low cost,” Zhang said. “A lot of people think they need to fill the capacitor with a lot of fillers to achieve the greater energy storage efficiency, but we showed you can accomplish it in the opposite direction, that is, by using very low-volume content fillers with very low-cost materials, which can also lead to greater breakdown strength. This keeps the cost low and makes this highly scalable.”

Increasing the electric breakdown strength in a capacitor will enable the device to handle higher temperatures without a failure in the system. This is an important trait in many electronics and electrical systems, including electric cars, industrial drills and electric grids.

“Hybrid electric vehicles now use a capacitor made of a material known as BOPP,” Zhang said. “They work well up to 80 degrees Celsius (176 degrees F). However, vehicles can get very hot, so you have to use a cooling agent. It increases cost and also adds volume. Now, you can use this new capacitor with metamaterials, which are smaller, to replace the existing capacitor and not worry about the cooling loop since it can handle higher temperatures.”

“We did not create a new material, but by using metamaterials in this way, we can greatly enhance the performance of existing materials without adding cost,” Zhang said.

This coating developed at the University of Michigan is hundreds of times more durable than its counterparts and could enable waterproofing of vehicles, clothing, rooftops and countless other surfaces.