Researchers at the University of Michigan and Seoul National University of Science and Technology have devised a new method for manufacturing devices that require precisely sized and positioned micro- and nanoscale particles. The technique is suitable for a wide array of assembly of micro- and nanoscale objects, and useful for electronic devices, and biological applications.

“It’s very hard to regulate things in the microscopic and nano-scale. You want the particles to sit there, and they won’t,” said Jay Guo, project leader and professor of electrical engineering and computer science. “We found a way to sort and localize large quantities of particles, and we can do it in a very scalable fashion.”

With this ability, engineers would be able to more efficiently manufacture and assemble photonic crystals, filtration devices and biological assays, create more sensitive sensing devices, and much more.

Guo has been working in the area of nanomanufacturing for decades, beginning with his work on roll-to-roll nanoimprint lithography. He switched to the current methodology of nanopatterning relying only on a sliced silicon wafer because of its relative simplicity and speed.

The new method adds an electric charge, which seems to make all the difference.

The goal of this research was to end up with a layer of orderly and like-sized micro- or nanoparticles that could be integrated into a device with high-density arrays. Current methods for doing this tend to be tedious while requiring complicated structures. Or, they are best suited for particles that are 10s to 100s of micrometers, leaving the separation and sorting of sub-micrometer particles a persistent challenge.

Guo and his international team of researchers, including former student Prof. Jong G. Ok, put together a microfluidic device that achieved their desired goals using a method that is also scalable, and relatively low cost. Ok’s team has been continuing to push the inscribing technology at his institute in Korea

The heart of the device is a specially designed substrate that captures the particles of a specific size in an orderly arrangement. To do this, the researchers first created indentations, in the shape of nanovoids, into a polycarbonate substrate through a patterning technique known as dynamic nanoinscribing (DNI). The resulting nanovoids were all the same size.

The substrate is then coated with Al2O3 and given a positive charge after being immersed in a salt solution.

Figure 1 shows the test setup, which allows for submicron-sized fluidic particles to enter the system and flow over the substrate before exiting. These particles are negatively charged in order to increase their attraction to the positively-charged nanovoids in the substrate. They were also given fluorescent labels for easy detection. 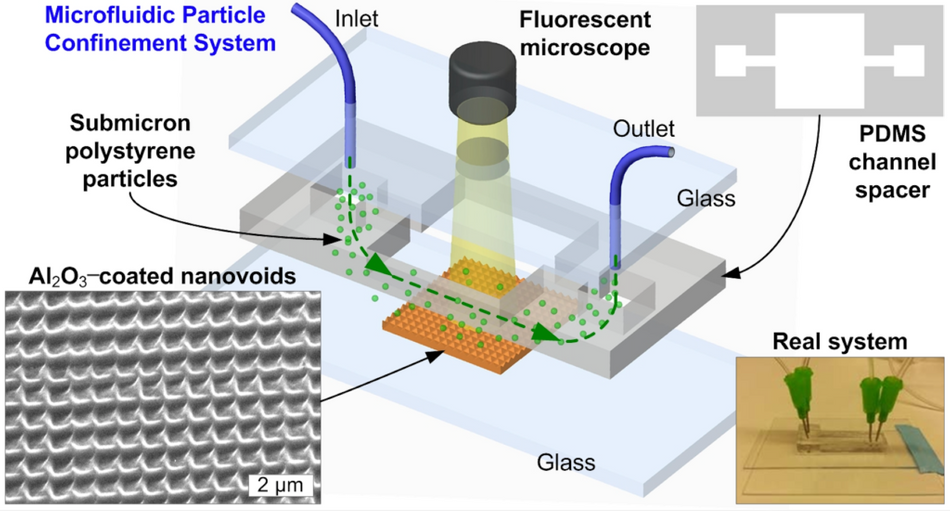 It might be expected that most of the particles would simply fall to the bottom of the fluid and rest on the substrate, but that’s not what happened. 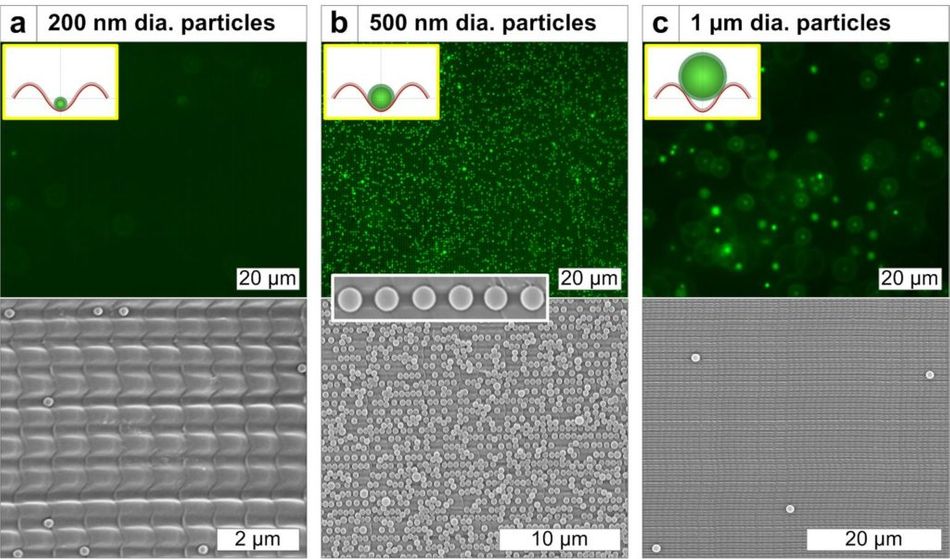 Figure 2. Fluorescent microscope images (top row) and SEM images (bottom row) of the particles trapped to the Al2O3-coated nanovoid structures, with the diameters of 200 nm (a), 500 nm (b), and 1 μm (c). The upper-left insets show the schemes of each case. The middle inset to panel b shows the enlarged SEM image disclosing the 500 nm diameter particles trapped in nanovoids in an orderly fashion.

500nm was the sweet spot. As more and more particles of this size were attracted to their final resting places in the nanovoid wells, the overall energy in the system decreased (in technical terms, this was due to the electrostatic attraction and increased entropy from the freed ions), which helped keep the particles strongly nested in their wells.

Guo described his delight in discovering that the nested particles could not be easily dislodged, even after rinsing the channel with water. It took sonication, or strong sound energy, being applied to the particles to dislodge them.

A key aspect of the technique for creating these nanovoids is its scalability. The 2D-DNI process creates specifically-sized nanovoids at high speed (~1 m/min or faster), which easily beats the competition by an order of magnitude. It is also a relatively low-cost technique.

While Guo’s primary focus was the application of this technique to building ever-shrinking and high-density electronic systems, he believes it could also have an impact on the future of biomedical devices, as well as the ability of medical researchers to investigate proteins, cancer cells, and bacteria interacting with charged surfaces.

Device fabrication was accomplished in the Lurie Nanofabrication Facility.

Guo is also affiliated with mechanical engineering, macromolecular science & engineering, and applied physics. Ok is a professor of mechanical and automotive engineering at Seoul National University of Science and Technology.

A team of EPFL scientists engineer nanoscale guitar strings that vibrate tens of billions of times when plucked at cryogenic temperatures, with a material originally developed for electronic transistors.