Earthrace is a conservation nonprofit that travels around the world saving endangered animals and habitats. Their current campaign in Costa Rica is aimed at stopping illegal fishing, poaching, and mining activities within protected marine and terrestrial national parks. Captain Pete Bethune of Earthrace shares how Teledyne FLIR and Raymarine technology helps them in their mission to locate illegal activities and keep the crew safe when headed into danger.

Captain Bethune and his crew of about 12 dedicated conservationists travel all over the world to wherever they can do the most good. Their work often takes them into dangerous situations, risking life and limb to protect endangered animals for little to no reward. “I've been now I think 12 years without any pay whatsoever,” Bethune remarks, “but I do believe the world is a better off place with me having done this work, and I think most of my crew would say that as well.”

In the past, the Earthrace crew has been responsible for halting illegal whaling in Antarctica, busting an illegal pangolin smuggling ring in the Philippines, and much more, some of it detailed in the TV show The Operatives. “Part of our job is to make people care about those things,” Bethune says, explaining about how almost no one knew about the pangolin, the most illegally smuggled animal in the world, before their team drew attention to it. “I like to think that you and me and everyone else, we do have the ability to effect change if there's enough of us who care about a particular issue.” 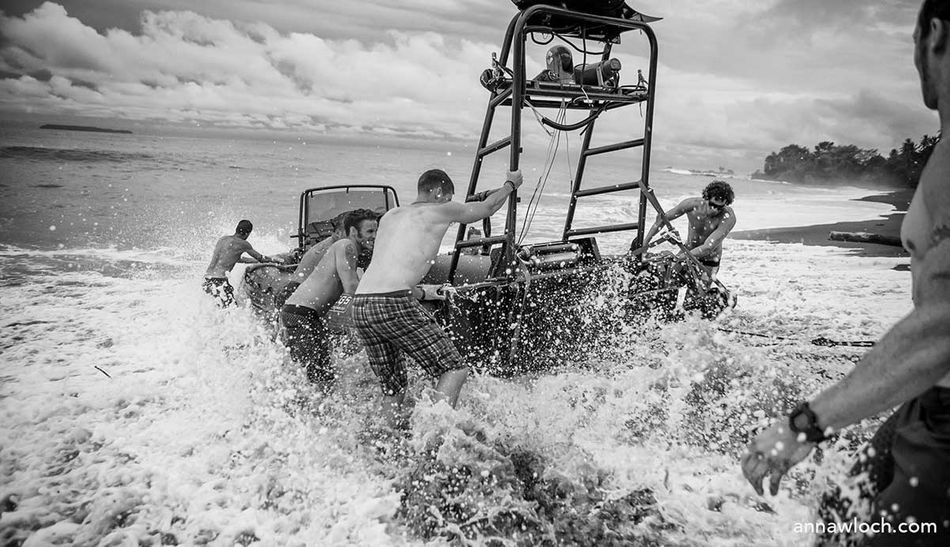 Behind the scenes on the TV show the Operatives. © ANNA WLOCH

For the past year the Earthrace team has been stationed in Costa Rica, helping Government Rangers protect both marine and terrestrial protected areas. Costa Rica covers only about 0.03 percent of the earth's surface, but contains nearly 6 percent of the world's biodiversity, preserved in large part due to their extensive system of national parks and conservation initiatives.1 That biodiversity, however, is under constant threat from illegal activities.

One of the critical conservation challenges facing Costa Rica is illegal fishing. During fishery patrols in marine protected areas, the crew often search for illegal fishing boats under the cover of night, allowing them to get close enough to the boats to collect the evidence they need. “Probably the key asset for us in all this is the FLIR system,” says Bethune. He explains that they need to film four things to prove illegal activity: “the registration mark on the ship, GPS location, a time stamp, and evidence of fishing gear in the water. And that last one is the hardest part,” he says, because vessels are likely to just cut the line to the fishing gear as soon as another boat approaches.

But with thermal imaging, Bethune and his crew can get close enough to film the evidence without needing to turn on a light and alert the illegal vessel to their presence. 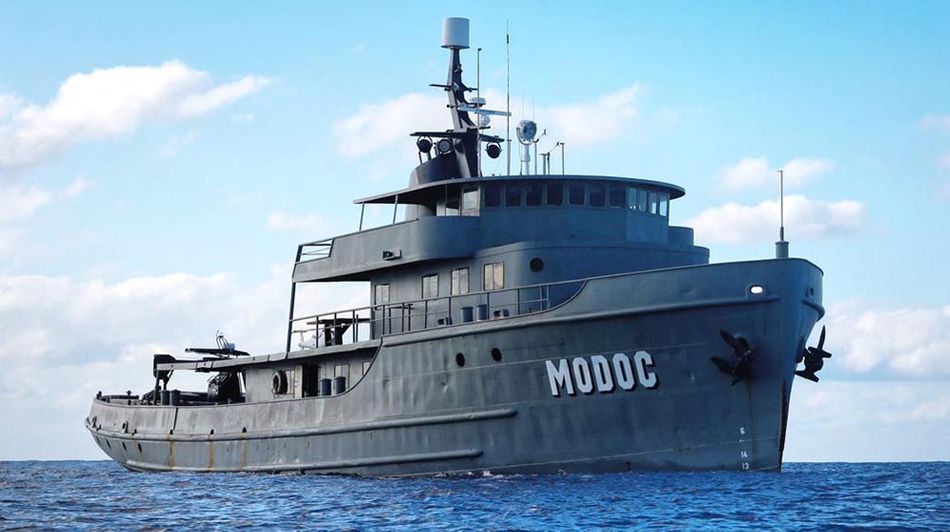 The Modoc, a former US Navy vessel, is now Earthrace’s main ship.

Their main vessel is a ship called the Modoc, a 45m long, former US Navy vessel equipped with a range of technology, including a FLIR M364C multispectral marine camera. Linked with a Raymarine radar, the M364C can easily locate a fishing vessel out on the water. “The Raymarine gear and the FLIR system has been an important part of my kit for a long time now,” Bethune says.

When it comes to getting close enough to film, however, they make use of their Zodiac MilPro FC-470, a small inflatable boat, or a Willard 7.4m RIB that was formerly deployed with the US Navy SEALs. Here’s where their FLIR LSX-R, a handheld thermal monocular, comes in handy.

“As we get closer we need to be more careful in terms of not giving away our position. The FLIR system allows us to be very covert, but to watch them as we get closer,” says Bethune. “Once we get evidence of the fishing gear in the water—and that's easily done with a FLIR system, like you've got a cold cable disappearing into warm water, there's fishing gear in the water—that is the key piece of evidence for us. Once we get that, we can light the boat up using visible light.” 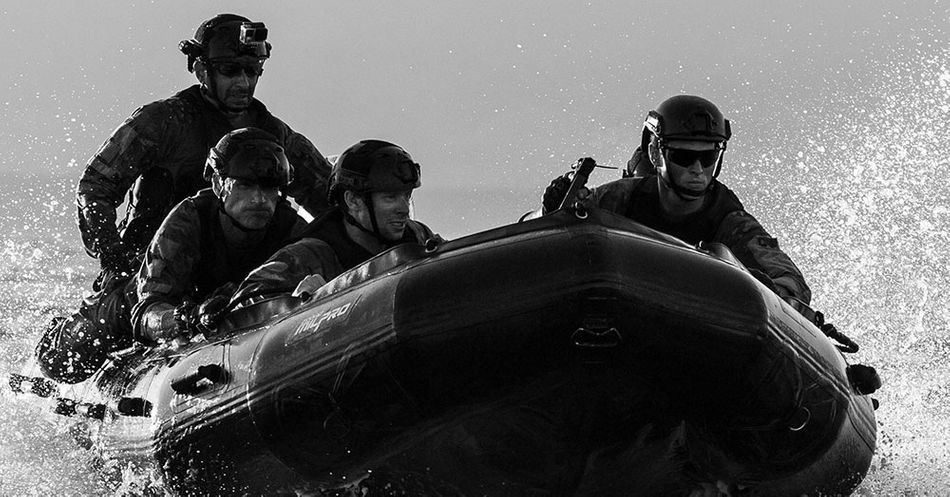 Earthrace crew training a local government team on the Zodiac.

Their next campaign is in Corcovado National Park in Costa Rica, and the large marine protected area around Cocos Island. “It is an extraordinary marine reserve, and at times in the past it has been under siege from illegal fishing,” says Bethune. Illegal fishing boats might be as far out as 300 miles offshore, making radar and the FLIR M364C especially critical for detecting vessels.

Patrolling for Poachers and Illegal Mining Operations in the Jungle

The FLIR LSX-R and other handheld thermal imagers are also integral during missions in the Costa Rican jungle, where the Earthrace team help rangers protect national parks from illegal gold mining and wildlife poachers. Rangers are equipped with both thermal imaging and night vision to catch illegal trespassers under the cover of darkness. Under the jungle canopy, however, there can be so little light that even night vision goggles (NVGs) may be unable to detect anything. 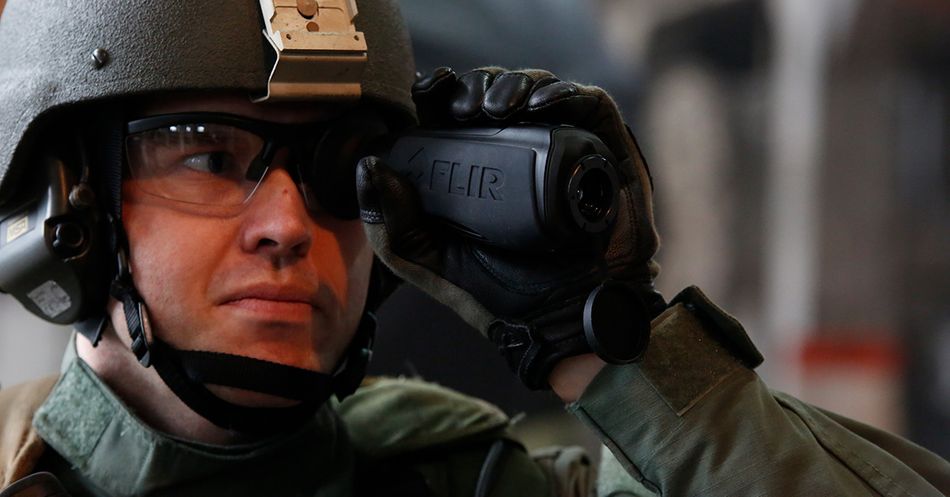 The FLIR LSX-R is a tactical handheld thermal monocular that fits easily into pockets and packs.

“You go into a jungle at night and it's very hard to detect anything, like the image is very sort of bland and washed out,” explains Bethune. “You go out using a FLIR system, and you have a guy even 150 meters away down this jungle track, he sticks out like anything.”

Confronting illegal activity in the jungle isn’t without its dangers. “Patrolling here is not easy, it's a really tough jungle, it's hard work. The miners are often armed, twice we've come under gunfire here from miners heading off into the jungle,” says Bethune. Operating at night allows the rangers to survey an area and find out what they’re up against before coming back with a larger team. “Having a FLIR system allows you to do that a lot more covertly, and with it with a greater degree of safety.”

“All of us had come under gunfire from gold miners fleeing an area at a particular time,” remarks Bethune, “so anything we can do here to try and make the rangers jobs easier or try and make them safer, is a good thing.” 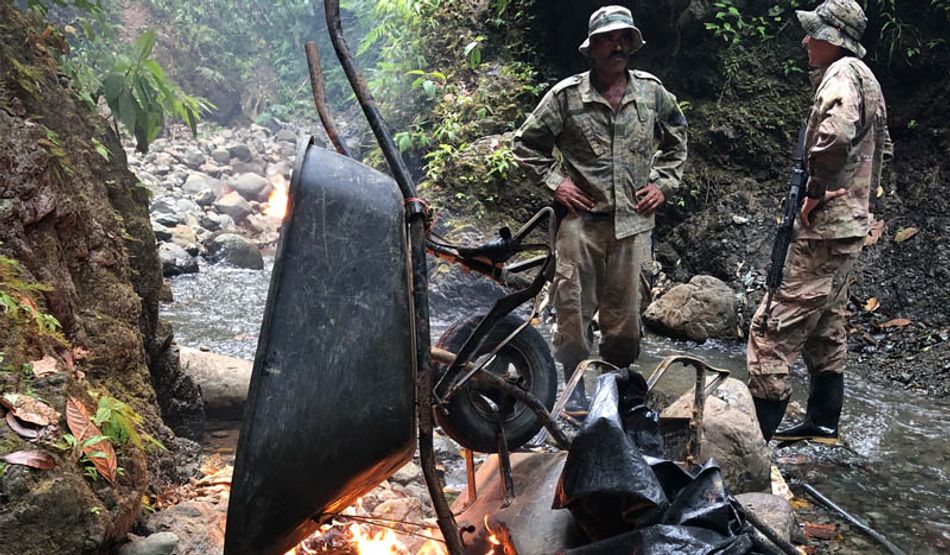 Earthrace and Their First FLIR System vs. Whalers

Their campaign in Costa Rica is only the latest stop on Earthrace’s journey. For almost two decades Captain Bethune and his team have been roving the world looking for animals and habitats to help protect, and they’ve had FLIR technology on their side for much of that time.

The first FLIR camera they had was on the boat that gave the nonprofit its name, Earthrace, which they took up to Antarctica in 2006 to confront Japanese whaling vessels. Commercial whaling was internationally outlawed in the 1980s, but whalers had been circumventing the ban by claiming to practice “scientific whaling” for many years (2). Both the Earthrace boat and that first FLIR camera were soon to meet a dramatic end when a whaling vessel rammed them. 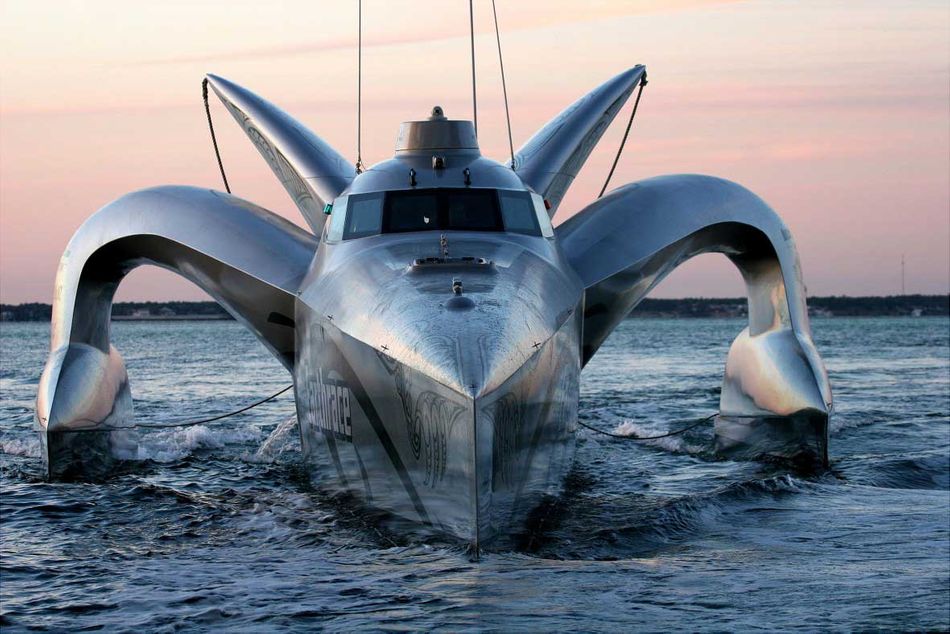 The trimaran Earthrace in 2006, with a FLIR camera on top of the Radome.

“The boat was largely destroyed, it was chopped in half,” Bethune says casually about the incident. “I'm just sitting up on the horn, next thing the security ship… was driving up beside us, and at the last minute they turned to star,” he recounts. “The whole bow completely chopped off the boat.”

After the incident, Bethune was arrested and held in prison in Japan for five months. Halfway through his imprisonment, however, a court action was called against Japan. It took an additional four years, but eventually the whaling in Antarctica was deemed illegal.

“Now I'm not claiming sole responsibility for that, but there was a series of things that played a part,” says Bethune. One of those things was certainly the presence of Earthrace and the media coverage they received. A video of the Earthrace being rammed by the whaling vessel was covered by the American TV show Whale Wars, prompting protests in New Zealand, Australia, and the United States that pressured the Australian government to take Japan to court. “I'm pretty proud to say I was part of a team that stopped whaling in Antarctica,” says Bethune. “And to be involved with something like that and have that against your name, is kind of cool.”

Protecting International Biodiversity Wherever You Are

Not everyone is willing to go to prison to protect whales, but we all have a part to play when it comes to protecting wildlife around the world. A huge part of what ordinary people can do is let the government know when they care about an issue. “If you've got a public that is indifferent to conservation, the government remains indifferent,” Bethune says. “But if you've got a population that really cares about an issue, it's more likely that your politicians will stand up for it.”

Bethune also urges us to remember that our consumption of everything from electronics to the food we eat plays a part in determining how habitats around the world are treated. “Take the illegal gold,” he uses as an example. “This is not being consumed by Costa Ricans, it is ending up on the electronics on your cell phone, and on your computer, and the screen that you watch movies in.” 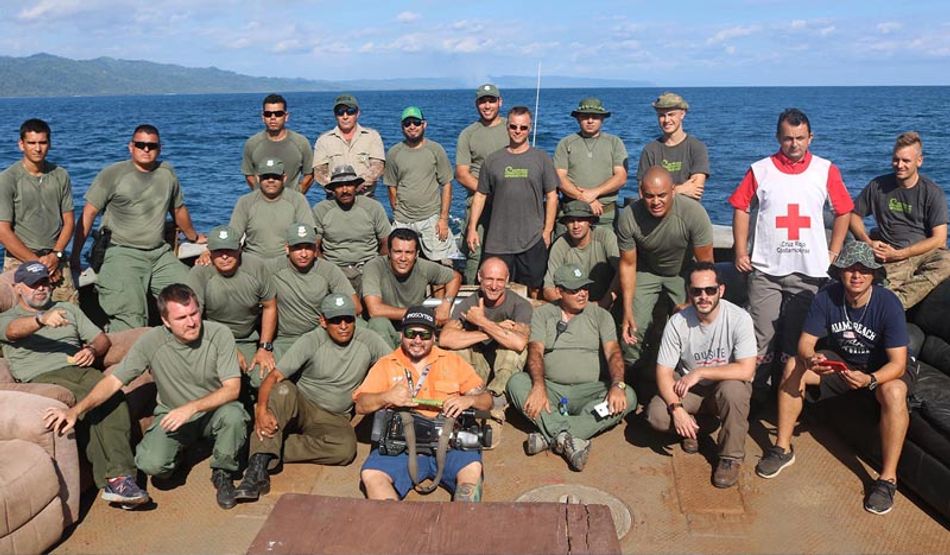 “The people we catch,” he points out, “the illegal miners or wildlife poachers and illegal fishermen—for the most part, these are poor people trying to feed their families.” Part of the problem is that there’s a demand for their activities in wealthier countries. Simple actions like making your computer or smartphone last as long as possible before buying a new one, or eating a little less meat, can make a huge difference. Bethune acknowledges that this last part can be a hard message to get across in countries like his native New Zealand: “You try and tell people in New Zealand not to eat so much meat and dairy, man they’s going to have a go at you on Facebook!” he laughs.

Bethune is hopeful, however, about the work he’s seeing done to protect the planet. “I think there's enough people and enough NGOs and enough companies starting to support conservation causes, that I think we are going to turn this around,” he says. “It's not as fast as I would like, and I wish there was more people on board, but we are heading in the right direction, and I think I am optimistic about what the future holds.”