Researchers at the German Aerospace Center (Deutsches Zentrum für Luft- und Raumfahrt; DLR) Earth Observation Center (EOC) have developed a correction procedure for the radar satellites of the European Sentinel-1 mission. With this methodology, the geographic location of satellite measurements can be determined with significantly greater accuracy. Every pixel can be localised on Earth’s surface with a precision of a few centimetres instead of a few metres.

Satellite-borne Synthetic Aperture Radar (SAR) uses radar signals transmitted towards Earth’s surface to acquire image data unconstrained by time of day and weather conditions. The SAR principle evaluates the propagation times of these signals and, in addition to the image data, provides highly accurate measurements of the distance from the satellite to Earth’s surface. The position measurement is available for any object that is visible as a pixel in the radar image. If all the influences that interfere with the measurement are factored out, positional accuracy of down to one hundredth of the image resolution can be achieved. In this way, the location of an image pixel with a ground resolution of one metre can be determined down to within one centimetre.

The complex correction procedures were first developed at EOC as part of the German TerraSAR-X radar mission. Now, the Sentinel-1 user community is also able to benefit from this DLR expertise. The European Space Agency (ESA) has commissioned EOC to improve the geometric measurement accuracy of the Sentinel-1 image data from the present several metres down to at least 20 centimetres.
After more than two years of development and testing, the correction processor was delivered to ESA in May 2021 and in June was introduced at the ESA FRINGE 2021 conference in June. At present, the processor and the resulting products are in test operation at ESA. Initial trial applications in the areas of ice mapping and interferometry are already yielding promising results. Further user studies are planned by ESA until the end of 2021.

With the European Sentinel-1 Copernicus Mission, the Sentinel-1 Extended Timing Annotation Dataset (S-1 ETAD) correction methodology can be used operationally for the first time. It will be used for global mapping of Earth and to improve many applications, for example the measurement of large-scale ice movements or ground displacements. Since the launch of the first Sentinel-1 satellite in 2014 and the second satellite in 2016, the Sentinel-1 mission has revolutionised radar-based Earth observation. Every day, the two satellites, Sentinel-1A and Sentinel-1B, deliver more than 100 radar images of Earth’s surface that are available free of charge to all users. 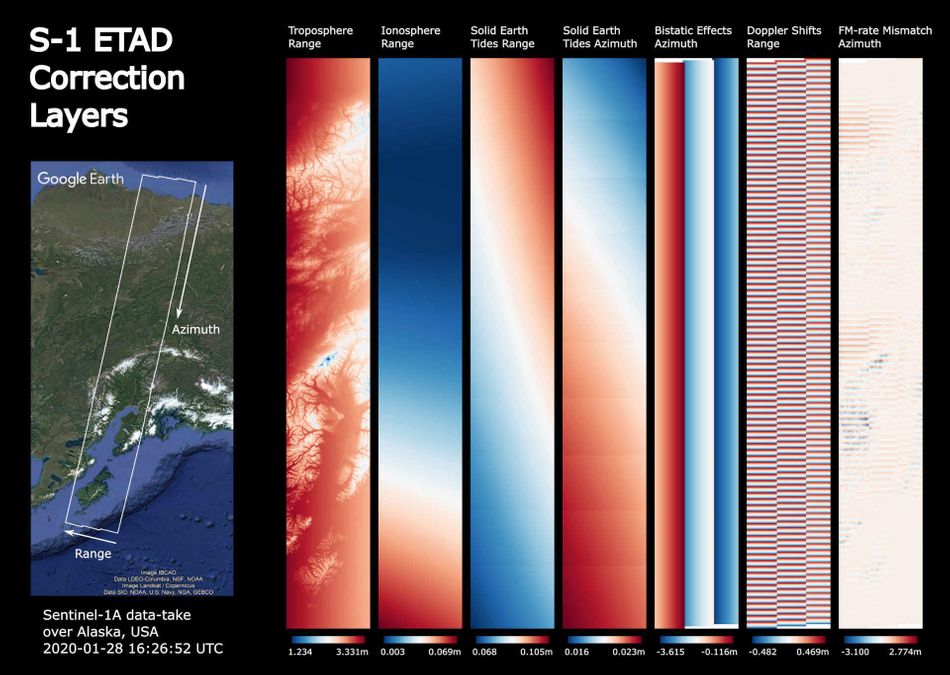 Because of the very large amount of data, the processor developed by EOC has to run very rapidly. The complex corrections for a typical Sentinel-1 image are computed in just a few minutes. For each individual image, the software takes into account the signal propagation delays through the neutral troposphere and the dispersive ionosphere, the deformations of the solid Earth cause by tidal forces, and SAR-specific image errors that arise during operational processing of the Sentinel-1 images. This demanding analysis is made using the exact parameters of each SAR image, the satellite orbit determined to an accuracy five centimetres, and a global terrain model with a resolution of 90 metres. Added to this, there are the parameters from the numerical weather model created by the European Centre for Medium-Range Weather Forecasts (ECMWF) and the electron content of the ionosphere as measured by Galileo and other global satellite navigation systems.

These data sets are continuously downloaded by ESA's Sentinel-1 ground segment and provided for the period of the recordings. The calculated effects add up to as much as five metres in the range direction (image coordinates perpendicular to the satellite's flight direction) and up to six metres in the azimuth direction (image coordinates along the satellite’s flight direction). The results are made available as customised corrections for each Sentinel-1 radar image.

Final, operational generation by the Sentinel-1 ground segment and delivery of ETAD products is planned for 2022.

In this episode, we talk about how ambitious, non-rocket propelled payload launching technologies can revolutionize the space industry in the not-so-distant future.