Perovskites are hybrid compounds made from metal halides and organic constituents, and show great potential in a range of applications, e.g. LED lights, lasers, and photodetectors. Their major contribution is in solar cells, where they are poised to overtake the market and replace their silicon counterparts.

Among the leading candidates for highly efficient and stable solar cells are formamidinium lead iodide perovskites, which show great light-harvesting capabilities. However, their stability is still an issue, especially under environmental and operating conditions, which limit their optoelectronic application.

Now, a collaborative team of scientists led by Professor Michael Grätzel at EPFL’s School of Basic Sciences have addressed the challenge by developing a “a multimodal host–guest complexation strategy”. Published in Nature Communications, the strategy involves using a member of the crown ethers, a family of cyclic compounds whose ring-like atomic structure resembles a crown.

The researchers used the dibenzo-21-crown-7 in the fabrication of formamidinium lead iodide perovskite solar cells. They demonstrated the efficiency of this synergistic approach with cesium metal ions, for which the crown ether shows a strong affinity. Acting as a vehicle, the crown ether assembles at the perovskite film’s interface and delivers the cesium ions into its interior. 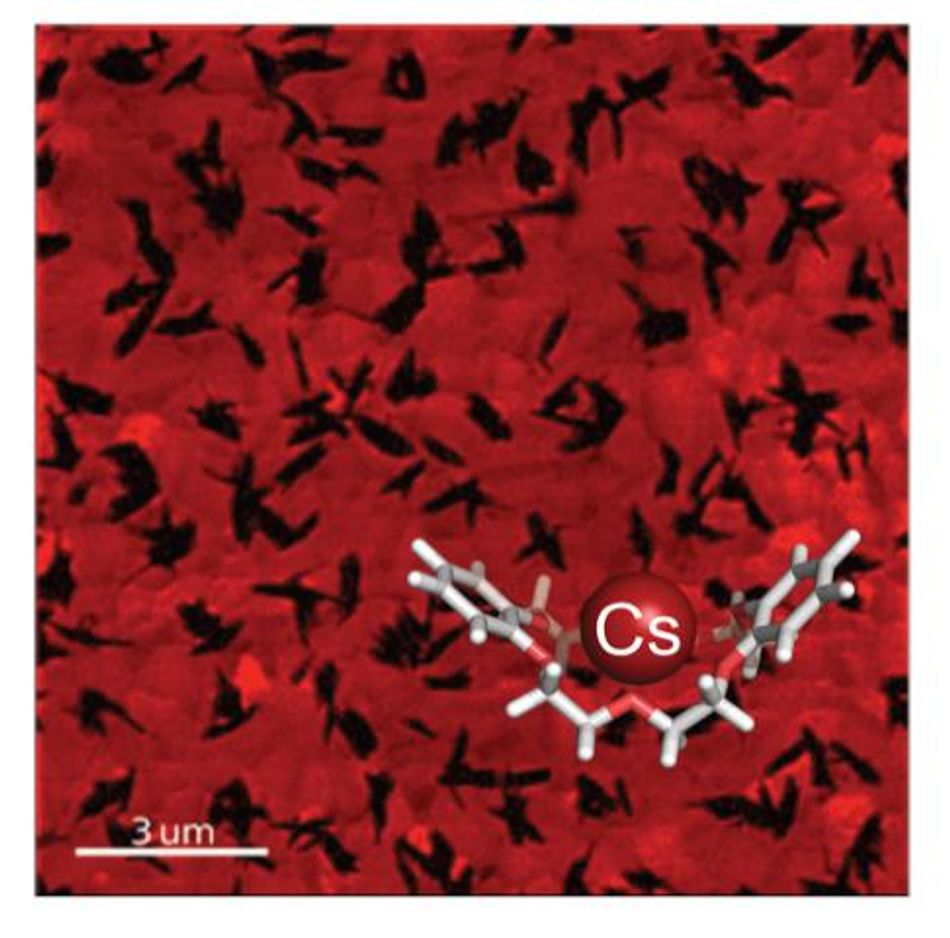 Perovskite film imaging upon treatment with a schematic representation of a crown ether host-guest complex serving as a vehicle to deliver Cs ions into the perovskite and stabilise it. Credit: Nicolas Tappy

“We use this multimodal host–guest-complexation to modulate the surface of the perovskite films as well as their bulk composition at the same time,” explains Dr Jovana V. Milić, who was involved in the study.

“It is also very exciting to see that photoactive formamidinium lead iodide perovskite can be stabilized in humid environmental conditions for more than one year,” says EPFL scientist Dr Hong Zhang, the first author of the study.

The overall effect is a greatly improved stability of the perovskite solar cells, showing power-conversion efficiency above 24% and an enhanced operational stability, maintaining more than 95% of their performance for 500 h under continuous operation. As an added bonus, the crown ether also helps bind lead ions, reducing their release into the environment.

Photovoltaic-powered sensors for the "internet of things"

Understanding the love-hate relationship of halide perovskites with the sun

New research by scientists at TU/e and universities in China and the US sheds light on the causes of perovskite solar cell degradation.