n artist’s rendering of the deployment of ChipSats from a shoebox-sized CubeSat. NASA has confirmed that in March short telemetry signals from the ChipSats were received by a ground station at Cornell.

Demonstrating a new type of space technology, 105 of the world’s smallest free-flying satellites have orbited the Earth, sending short telemetry signals received by a ground station at Cornell.

An engineering team from Stanford University and NASA Ames first made contact with the payload of tiny satellites, called Sprite ChipSats, on the night of March 19, one day after they were deployed from their carrier spacecraft, KickSat-2, a shoebox-sized CubeSat. The team has since worked to complete the first phase of mission data analysis – a triumphant accomplishment for the engineers, who began the novel project back in 2011 at Cornell. 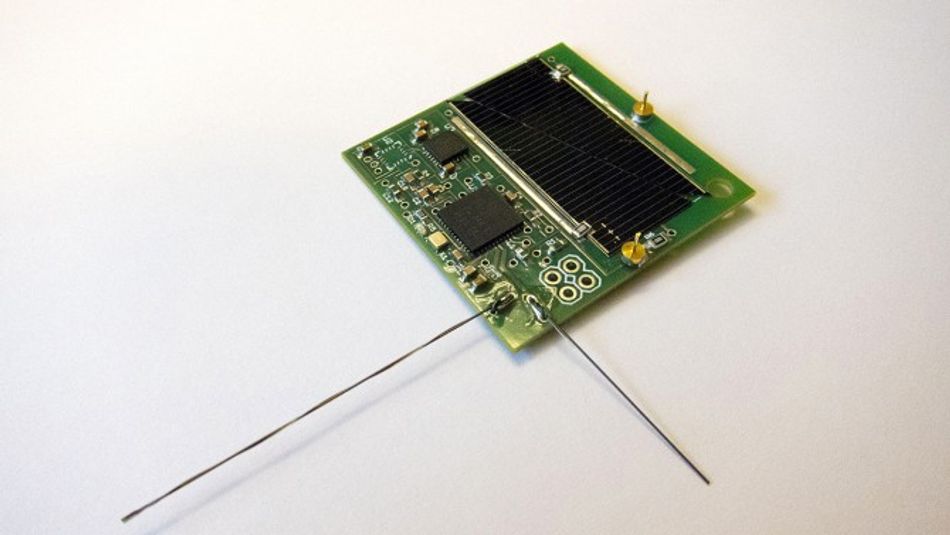 An example of a Sprite ChipSat, a cracker-sized mini-satellite developed in the lab of Mason Peck, associate professor of mechanical and aerospace engineering. Cornell University

Peck led the early development of the Sprites with former students Zachary Manchester and Justin Atchison. Manchester, who is now an assistant professor of aeronautics and astronautics at Stanford, designed and built the KickSat-2 spacecraft with collaborators at the NASA Ames Research Center, and has led the mission since its inception.

The cracker-sized Sprites weigh just 4 grams each but carry their own power source, a variety of sensors and a communications system on a 1.4-inch square circuit board. Using solar power, they transmitted short bursts of frequencies in the 400 megahertz range with only milliwatts of power, demonstrating for the first time the feasibility of spacecraft that swarm like insects.

“The goal of the Sprites on KickSat-2 is to demonstrate basic capabilities, one of which is communications that do not interfere with other satellites. In a few years, we expect game-changing scientific and commercial applications. The next generation has GPS navigation capability and can measure atmospheric behaviors, magnetic fields and so much more,” said Peck, who served as NASA’s chief technologist from 2011-14.

The Sprites were sent into orbit from the Cygnus NG-10 rocket as it made its way to the International Space Station in November 2018, but it wasn’t until March 18 that the KickSat-2 spacecraft was able to deploy the Sprites. They remained in orbit for only a few days before re-entering Earth’s atmosphere, a key aspect of their design that ensures that they do not pose a risk as space debris.

The successful deployment and communication with the Sprites was also cause for celebration for the more than 300 space enthusiasts who had backed the project through a Kickstarter campaign. Some supporters of the project were given ownership of a Sprite and allowed to customize the signal coming from it. Peck says a few enthusiasts have been able to track their Sprites at home using fairly inexpensive equipment.

“KickSat-2 represents the largest, single number of free-flying satellites ever deployed at once. At less than $100 in parts, a Sprite is a spacecraft for the rest of us,” said Peck, who added more Sprite missions are in the works, including on the proposed CAESAR spacecraft that will rendezvous with a comet.

To grow its famous grapes, California’s wine country along the state’s north coast benefits from the cooling influence of the Pacific Ocean and the dry summers characteristic of the region.

As the Mars 2020 launch approaches, a separate effort is using simulations to understand landing dynamics for tomorrow's missions.

Stanford engineers are part of a nationwide effort to build a next-generation hardware and software system to provide the ultimate assurance of safety when space rockets blast off.