With the green light of a smartwatch, researchers can switch on an insulin-​producing gene network. (Photograph: Colourbox)

Many modern fitness trackers and smartwatches feature integrated LEDs. The green light emitted, whether continuous or pulsed, penetrates the skin and can be used to measure the wearer’s heart rate during physical activity or while at rest.

These watches have become extremely popular. A team of ETH researchers now wants to capitalise on that popularity by using the LEDs to control genes and change the behaviour of cells through the skin. The team is led by Martin Fussenegger from the Department of Biosystems Science and Engineering in Basel. He explains the challenge to this undertaking: “No naturally occurring molecular system in human cells responds to green light, so we had to build something new.”

Green light from the smartwatch activates the gene

The ETH professor and his colleagues ultimately developed a molecular switch that, once implanted, can be activated by the green light of a smartwatch.

The switch is linked to a gene network that the researchers introduced into human cells. As is customary, they used HEK 293 cells for the prototype. Depending on the configuration of this network – in other words, the genes it contains – it can produce insulin or other substances as soon as the cells are exposed to green light. Turning the light off inactivates the switch and halts the process. 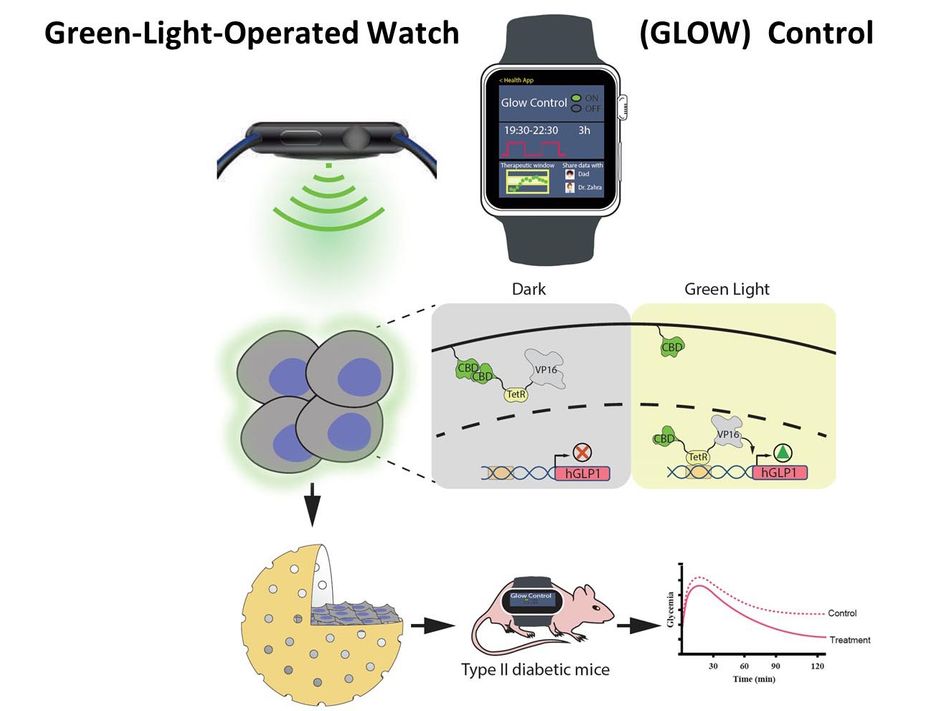 As they used the standard smartwatch software, there was no need for the researchers to develop dedicated programs. During their tests, they turned the green light on by starting the running app. “Off-the-shelf watches offer a universal solution to flip the molecular switch,” Fussenegger says. New models emit light pulses, which are even better suited to keeping the gene network running.

The molecular switch is more complicated, however. A molecule complex was integrated into the membrane of the cells and linked to a connecting piece, similar to the coupling of a railway carriage. As soon as green light is emitted, the component that projects into the cell becomes detached and is transported to the cell nucleus where it triggers an insulin-producing gene. When the green light is extinguished, the detached piece reconnects with its counterpart embedded in the membrane.

The researchers tested their system on both pork rind and live mice by implanting the appropriate cells into them and strapping a smartwatch on like a rucksack. Opening the watch’s running program, the researchers turned on the green light to activate the cascade.

“It’s the first time that an implant of this kind has been operated using commercially available, smart electronic devices – known as wearables because they are worn directly on the skin,” the ETH professor says. Most watches emit green light, a practical basis for a potential application as there is no need for users to purchase a special device.

According to Fussenegger, however, it seems unlikely that this technology will enter clinical practice for at least another ten years. The cells used in this prototype would have to be replaced by the user’s own cells. Moreover, the system has to go through the clinical phases before it can be approved, meaning major regulatory hurdles. “To date, only very few cell therapies have been approved,” Fussenegger says.

A new, $3 million award will fund the development of sipIT, a technology-based intervention to encourage people to drink more fluids.