Researchers have demonstrated a new fabrication technique that allows them replicate the nanostructures found on cicada wings that make them water- and microbe-repellent. Photo by Wayne Boo, U.S. Geological Survey

A multidisciplinary group that studies the physical and chemical properties of insect wings has demonstrated the ability to reproduce the nanostructures that help cicada wings repel water and prevent bacteria from establishing on the surface. The new technique – which uses commercial nail polish – is economical and straightforward, and the researchers said it will help fabricate future high-tech waterproof materials.

The team used a simplified version of a fabrication process – called nanoimprinting lithography – to make a template of the complex pillar-shaped nanostructures on the wings of Neotibicen pruinosus, an annual cicada found in the central region of the United States. The templates are fully dissolvable and produce replicas that average 94.4% of the pillar height and 106% of the original wing, or master structure’s pillar diameter, the researchers said.

The results of the study are published in the journal Nano Letters.

“We chose to work with wings of this species of cicada because our past work demonstrates how the complex nanostructures on their wings provide an outstanding ability to repel water. That is a highly desirable property that will be useful in many materials engineering applications, from aircraft wings to medical equipment,” said Marianne Alleyne, an entomology professor at the University of Illinois at Urbana-Champaign, who co-led the study with Donald Cropek, of the U.S. Army Corps of Engineers’ Construction Engineering Research Laboratory, and Nenad Miljkovic, a professor of mechanical science and engineering at Illinois.

Nanoimprinting lithography is not new but can be labor-intensive and expensive, the researchers said. Some approaches use toxic materials that can damage the original copied object, like a delicate cicada wing. Others require high temperatures that are not compatible with biological samples such as plants or insects.

“Our process allows us to do this in an open lab at room temperature and atmospheric pressure,” Cropek said. “We use nail polish and rubbing alcohol, which does not inflict any damage to the delicate wing nanostructures.” 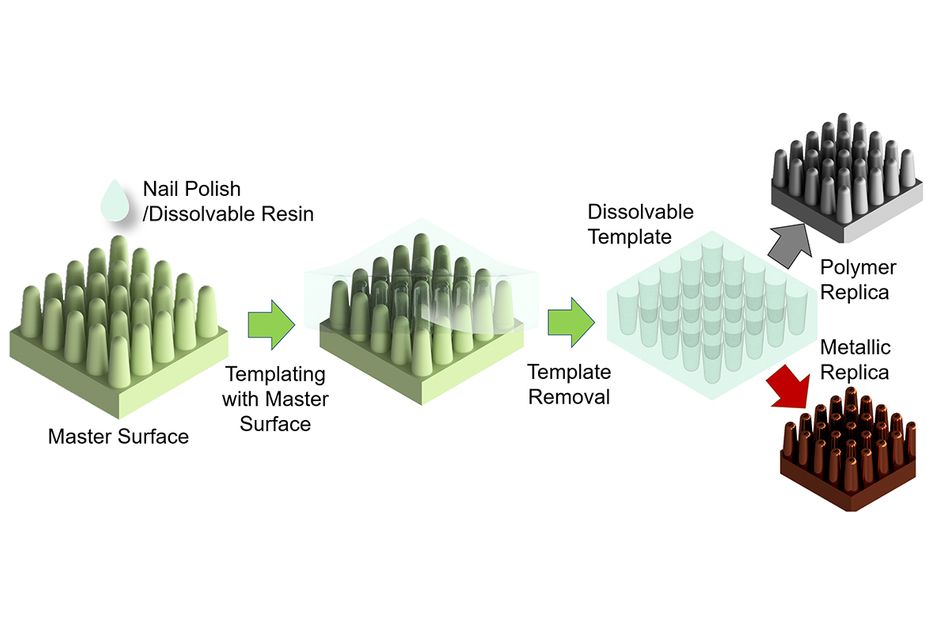 In the lab, the team applies a quick-drying nail polish directly to a cicada wing, which is then left to cure at room temperature.

“It was not easy to find the right formula of nail polish because we want to avoid one that will warp or stretch the template during removal,” Alleyne said. Once completed, the template can be coated with a polymer or metal then dissolved away, leaving only the replica metal or polymer.

“Copper is particularly interesting to us because of its inherent antimicrobial properties, and our past work indicates that some cicada species display antimicrobial properties on their wings,” Alleyne said. “We don’t know if it is the chemicals on the wing’s surface or the physical nanostructures, or a combination of both chemistry and topography, that produce the bactericidal activity, but being able to produce materials with different chemistries and structures will help us answer that fundamental question. This new, relatively simple fabrication method will  ultimately help us design multifunctional engineered materials.”

The paper “Dissolvable template nanoimprint lithography: A facile and versatile nanoscale replication technique” is available online and from the U. of I. News Bureau. DOI: 10.1021/acs.nanolett.0c01547