Some discoveries come to light when scientists carry out routine work to study the limitations of a long-known theory, decide to slightly change standard experimental methods, or use close analogs of a well-known substance. This approach has more than once led to unexpected findings and even to very significant discoveries.

The scientists of the Infochemistry Scientific Center at ITMO University have created a new functional material while working with melamine cyanurate precipitation reaction.

“There is a well-studied substance: melamine cyanurate. In the scientific community, it attracts interest due to its symmetric structure built from many hydrogen bonds. In industry, it has also found its application, – says one of the authors, Vladimir Shilovskikh, – it is added to polymers and paints to reduce their flammability. We became interested in melamine cyanurate because it forms an insoluble precipitate even at negligible concentrations of reagents. We decided to check whether a precipitate would be obtained if we slightly lower the symmetry in one reagent – and took barbituric acid instead of cyanuric acid.” 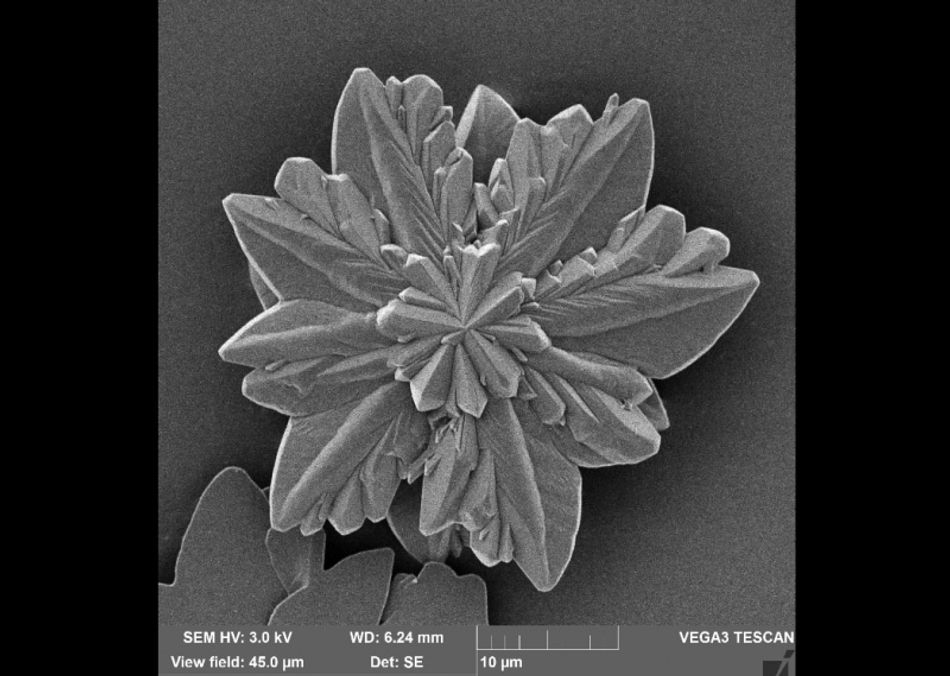 Barbiturate, like melamine cyanurate, belongs to the class of supramolecular assemblies that are formed from the initial individual substances due to the great affinity of the melamine molecule for the cyanuric (barbituric) acid molecule due to their complementarity. Moreover, the reaction of their formation proceeds almost to the end – that is, as long as there are free reagents in the solution.

Initially, the scientists did not plan to devote much time to the experimental material, but during the initial tests, some interesting properties of the resulting melamine barbiturate were revealed. Thus, it was possible to obtain relatively large crystals of a well-defined shape. Moreover, it turned out to be a photoluminophor, in contrast to the original reagents, which means that the substance is capable of glowing when "pumped" with ultraviolet radiation.

“To find out the nature of its luminescence, we decided to acquire the spectrum of electron paramagnetic resonance,” says Shilovskikh, “and it had shown that the substance contains radicals, and the spectrum shape indicates that these are “external”, not “native” radicals since molecular structure of both melamine and barbituric acid is stuffed with nitrogen and hydrogen atoms, which should split the signal in the spectrum if an unpaired electron is localized at least to some fraction on these atoms. It was found that somehow melamine barbiturate captures radicals from the environment and stabilizes them in its structure. Most likely, luminescence is associated with these “external” radicals.” 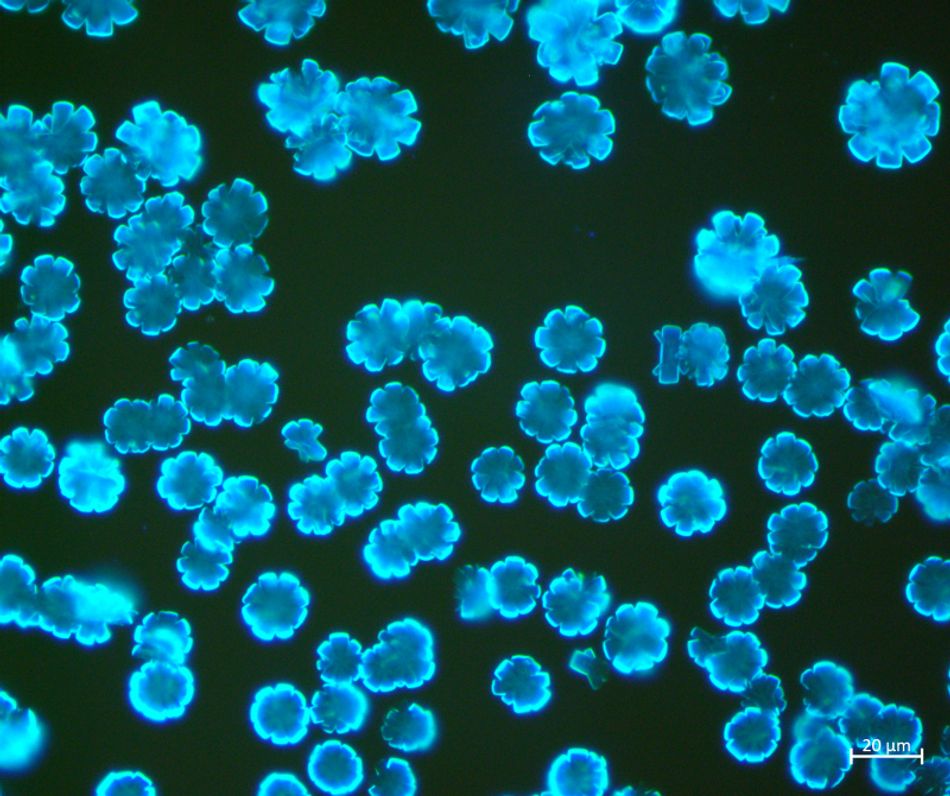 A polycrystalline particle of supramolecular self-assembly based on melamine barbiturate. Fluorescence microscopy (Zeiss Axioscope A1). Photo courtesy of the article authors

This property of the material has interested scientists since free radicals play an important role in various biological reactions – if a substance is capable of capturing radicals from the environment, then it can be used to control the course of such processes.

“Melamine barbiturate is formed in an aqueous solution at room temperature and neutral pH, it is most likely biocompatible. All this and the ability to accumulate radicals from solution can be useful for biological research, for example, the substance can potentially be used as a bioregulator, for example, in experiments with bacteria growth. If the substance captures free radicals that arise during the life of bacteria, we can learn more about the life cycle of bacteria and the role of radicals in this cycle,” explains the author of the work.

At the moment, the first complex of studies has been carried out and its results were published in an article in Chemistry: The European Journal. Now, scientists of the Infochemistry Scientific Center at ITMO University continue to study the new material.

Ingestible medical devices can be broken down with light

How to get conductive gels to stick when wet

A new way of making polymers adhere to surfaces may enable better biomedical sensors and implants.