These polymers, seen here under UV light, are composed of the exact same components. The only difference is their chain length. (Photograph: Suiying Ye / ETH Zurich)

Around the world, a huge amount of research and development work is currently being done on carbon-containing, or organic, molecules that emit coloured light after appropriate excitation. This research field is driven by the display industry and the development of biomedical imaging techniques. While precise colour tuning in organic fluorescent dyes has so far usually been achieved by mixing different molecules, ETH researchers have now developed an approach that can generate a broad palette of colours by way of chemical adjustments within the molecules themselves.

Yinyin Bao, a group leader in the group of ETH professor Jean-Christophe Leroux, and his team of scientists turned to fluorescent organic polymers for this work. These polymers can best be thought of as moving chains of varying lengths. “The chains have a symmetrical structure, and two components within them contribute to the fluorescence,” Bao explains. “One component, called the fluorophore, sits in the middle of the chain, while the other component occurs once at each of the chain’s two ends.” Joining the fluorophore in the middle of the chain with each end of the chain are links whose number and structure scientists can adjust. If the polymer chain is bent so that one of its ends comes to lie near the fluorophore and the chain is simultaneously irradiated with UV light, it fluoresces. 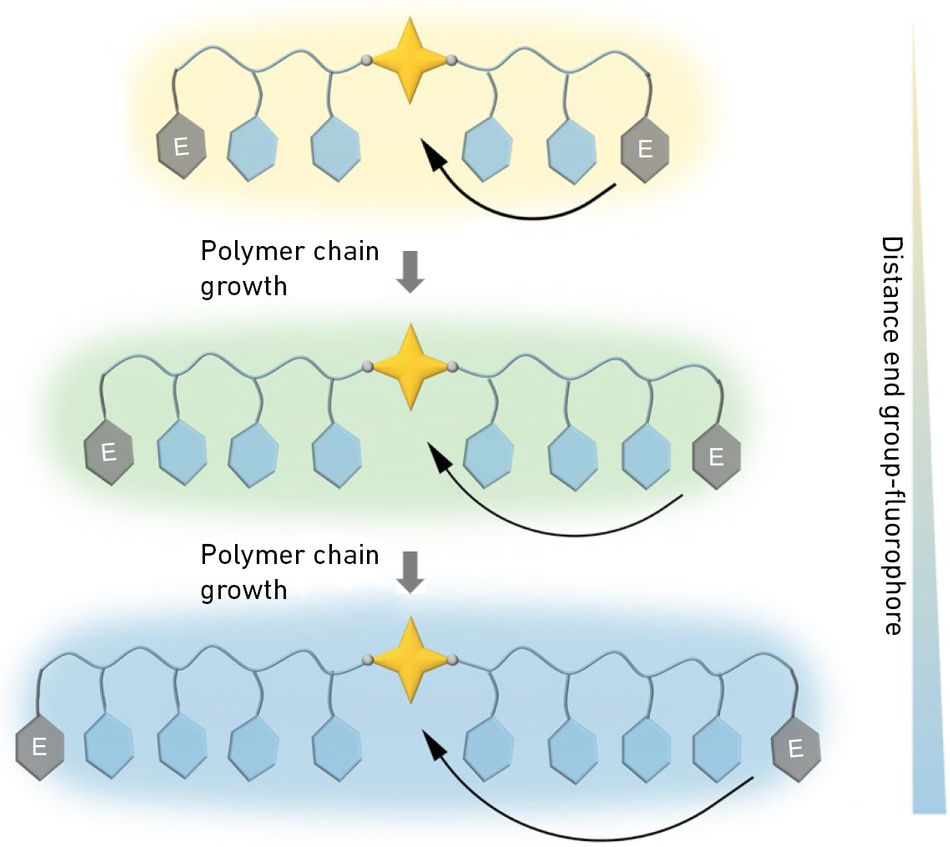 The scientists have now been able to show that the fluorescence colour depends not only on the structure of the chain links and ends, but also on the number of chain links. “It’s the interaction of the chain end and the fluorophore that’s responsible for the fluorescence of these polymers,” Bao says: “The distance between the two components affects how they interact and thus the colour that’s emitted.”

Using a method called living polymerisation, the researchers can regulate the number of chain links. First, they gradually grow the chain by a slow process of attaching building blocks to the fluorophore. Once the desired length is reached, the scientists can terminate the process and simultaneously generate the chain end molecule. This is how the researchers produced polymers with different colours: with fewer than 18 building blocks, the molecules fluoresce yellow; with 25 chain links, green; and with 44 or more links, blue. “What’s special about this is that these differently luminescent polymers are all composed of the exact same components. The only difference is the chain length,” Bao says.

The research team, including scientists from the group of ETH Professor Chih-Jen Shih and from the Royal Melbourne Institute of Technology in Australia, published their work in the journal Science Advances. Currently, the researchers can produce fluorescent polymers in yellow, green and blue, but they are working on extending the principle to include other colours, including red.

These new fluorescent polymers can’t be used directly as OLEDs (organic LEDs) in displays because their electrical conductivity is not sufficiently high, Bao explains. However, it ought to be possible to combine the polymers with semiconducting molecules in order to produce wide colour range OLEDs in a simple way. Used in concentrated solar power plants, they could also collect sunlight more efficiently and thus increase the plants’ efficiency. Bao sees their main areas of application in laboratory diagnostic procedures that use fluorescence, for example in PCR, as well as in microscopy and imaging procedures in cell biology and medicine. Other potential uses would be as security features on banknotes and certificates or in passports.

"Magic" alloy could spur the next generation of solar cells