Student team Tech United of Eindhoven University of Technology is working on an autonomous care robot that can help with everyday household tasks. In order for this to work out, the robot must also be able to work well with people. The question that arises is: should the robot ultimately start thinking like a human being?

"Yes," says Josja Geijsberts, team leader of Tech United @Home. "Various techniques come together in the care robot." A robot knows where it is in its environment and how to move around in a safe way via localization and navigation,. On top of that, the robot has to detect and classify objects in order to know what is in that space and how to cope with anything it comes across.

Robots use manipulation technology to be able to grasp something. "Suppose a robot has to pick up a glass of water. It must first find the glass, then it must determine how to move its arm which has a gripper towards the glass of water. And while it is moving its arm, it has to make sure that it doesn't knock over anything else. These are all different steps the robot needs to negotiate," Geijsberts explains further. "All of these tasks combined make it pretty complicated for a robot."

A robot perceives its environment with the help of sensors. These are comparable to the senses of humans. "But it is only then that the real work begins," says René van de Molengraft, associate professor and senior lecturer at the Control systems Technology research group at the TU/e Faculty of Mechanical Engineering. "The sensors transmit all kinds of signals, such as camera images and audio recordings. The robot then has to process and interpret the raw data in order to understand what is happening in the world around it. These processes also happen in our brains."

What is known as the world model for a robot must be set up in such a way that it can adapt to its environment. "For example, a robot should not clean one table just once, but it should be programmed in such a way that it can clean all of the tables all the time," Van de Molengraft continues. This is also referred to as robustness. "That is one of the greatest challenges in robotics." 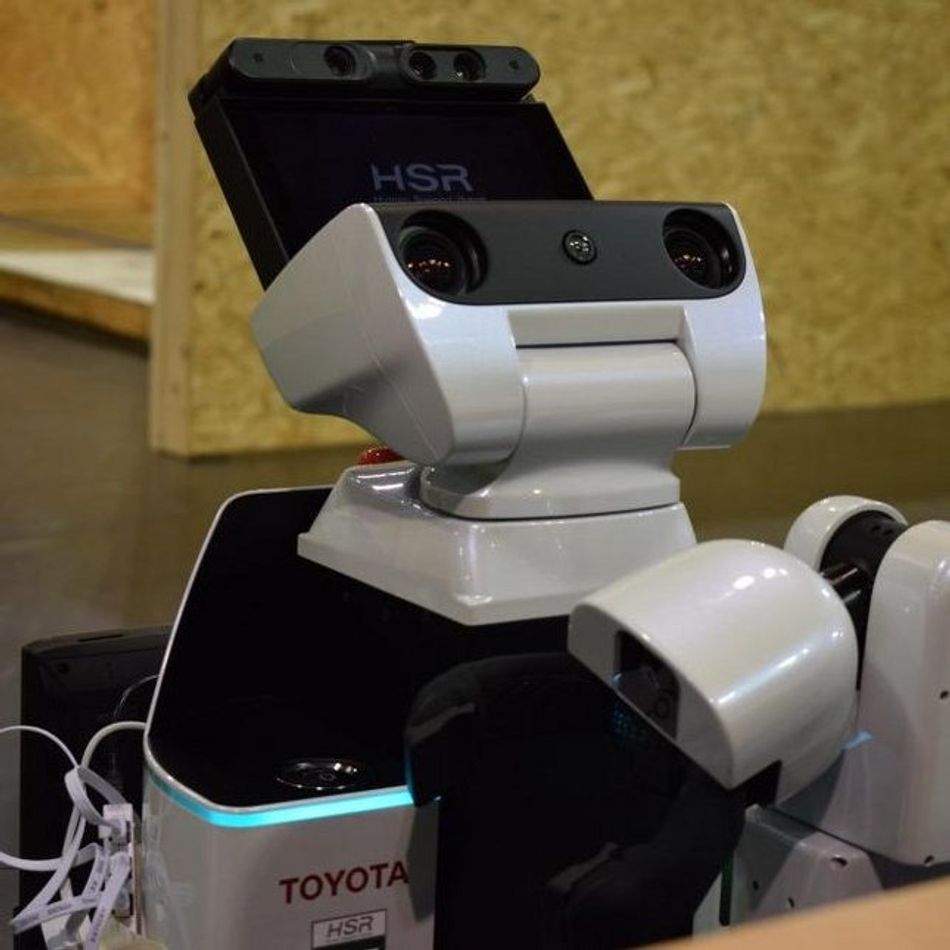 In addition to the technical challenges, the robot must also be able to interact with people. "If a robot wants to give you something, it must, of course, not push it in your face and then release it," says Geijsberts. "It has to do this in a gentle and friendly way. People also need to understand what the robot actually does or expects from you. That kind of interaction is very natural for people, but for a robot, it can be quite tricky."

The goal of Tech United is to design a robot for chores in nursing homes. The students spent a day there to see what tasks the robot could help with. "For example, one woman said that she sometimes has to wait half an hour for a nurse to help her go to the toilet. The robot could help her sooner," Geijsberts notes.

Van de Molengraft elaborates: "The interaction between humans and machines is very important in this respect." Getting someone out of bed is a very complex task for a robot. "Lifting is not an issue for a robot. As long as the motor is powerful enough. But it also needs to be comfortable for the person concerned," he explains. "People know exactly how skin and bodies feel and how firmly we can hold someone without hurting them. Robots hardly have any feelings, so it's hard for them to judge. That's why we are now developing robots that - through the use of sensors - have sensation in their fingers. It will be a few decades before this technology is readily available."

Van de Molengraft believes that robots can initially be used for more logistical functions, such as delivering food and bedding. It is different when it comes to care services. Geijsberts: "We have spoken to people who would not appreciate it if a robot helped with washing, for instance. On the other hand, there are also people who would prefer that, because they find it uncomfortable if someone else has to do it." People could then choose for themselves what they are most comfortable with.

Research is being carried out all over the world to teach these types of robots all kinds of skills. What makes the research at the TU/e stand out? "We are real system thinkers," says Van de Molengraft. "This has led to several victories at the international RoboCup. According to the lecturer, system thinking ensures that researchers and students maintain an overview and look into the integration of technology at an early stage. "Development in robotics is a combination of system design - as in the bigger picture - and research within sub-disciplines, such as the range of technologies. In the end, all of this has to come together in the robot. Moreover, the robot has to become integrated into the lives of people."

The robot gets the command to pick up the cup at the cupboard.

Not only the technology but also the ethical framework in which the robot should act is of the utmost importance. "The ethical questions surrounding these robots are huge," says Van de Molengraft. Who, for example, is responsible if a robot has to make autonomous decisions? "We genuinely must have an answer to these questions before we can start rolling out the technology." Laws and legislation are particularly important in his view. "Certainly in the case of healthcare, a robot's decision can be a matter of life and death. Then it needs to be clear what the rules are and what we, as a society, consider admissible."

Robots will in the future gain more and more autonomy, according to Van de Molengraft. "Robots can do increasingly more on their own because they are capable of rationally considering how to act in a particular environment," he points out. "Besides this, in the future, we will be able to replace elements of humans with technology or enhance them with technology. Then you won't have a robot that does everything, but humans will have a specific extension then. This enables you, as a human being, to do things that you could not do in the past. An exoskeleton is a good example of this. You consequently have the intelligence of the human along with the capabilities of technology."

Geijsberts also expects that robots will supplement the knowledge and skills of people in the future. "It is not our goal at Tech United to build a robot that can replace people and take over their jobs. We think that robots can support people and help them wherever needed."

Trash Talk Hurts, Even When It Comes From a Robot

Trash talking has a long and colorful history of flustering game opponents, and now researchers at Carnegie Mellon University have demonstrated that discouraging words can be perturbing even when uttered by a robot.

Like its predecessor, JackRabbot 2 is learning how to navigate safely through spaces occupied by people, following the rules of human etiquette. What it learns could help it move comfortably among us in the future.

The Stretch RE1 is an invention by Hello Robot, a company founded by Dr. Aaron Edsinger and Dr. Charlie Kemp in 2017. It is a mobile manipulator with a gripper, computer, sensors and software included.