A tiny, implantable carbon fiber electrode developed at the University of Michigan and demonstrated in rats has the potential to provide a long-term brain-computer interface that can capture the scope and nuance of electrical signals over lengthy periods of time.

It’s a step that could one day lead to advances for humans that boost quality of life for many by: giving amputees and those with spinal injuries control of advanced prosthetics, stimulating the sacral nerve to restore bladder control, stimulating the cervical vagus nerve to treat epilepsy and providing deep brain stimulation as a possible treatment for Parkinson’s.

“There are interfaces out there that can be implanted directly into the brain but, for a variety of reasons, they only last from months to a few years,” said Elissa Welle, a recent PhD graduate from the U-M Department of Biomedical Engineering. “Any time you’re opening up the skull for a procedure involving the brain, it’s a big deal.”

Silicon is most widely used in today’s brain implants due to its ability to conduct electricity and its historic use in cleanroom technology. But the human body sees silicon as a foreign substance, meaning it will lead to the formulation of scar tissue over long periods. It will eventually degrade and no longer capture brain signals, requiring removal. 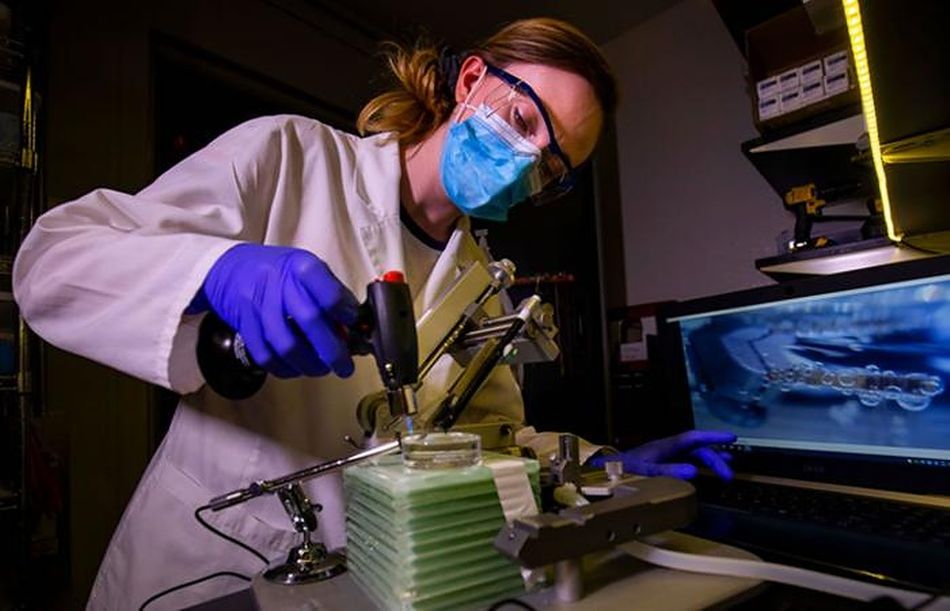 Carbon fiber may be the answer to getting high-quality signals with an interface that lasts years, not months. Carbon is one of the key elements in the body, present in organic molecules like proteins, carbohydrates, and fats.

And by laser cutting and sharpening carbon fibers into tiny, subcellular electrodes in the lab with the help of a small blowtorch, U-M engineers have harnessed the potential for excellent signal capture in a form the body is more likely to accept.

“After implantation, it sits inside the brain in a way that does not interfere with the surrounding blood vessels, because it’s smaller than those blood vessels,” Welle said. “They’ll move around and adjust to an object that small, rather than get torn as they would when encountering larger implants.”

Smaller size accounts for part of the electrode’s compatibility in brain tissue, but its needle-like shape may also minimize compacting of any surrounding tissue. Larger carbon-based electrodes have been shown to exist in the body and actually encourage neural tissue to grow rather than degrade. U-M’s team is hopeful that further testing will reveal similar potential for their carbon fiber electrodes in the brain and nerves.

Previous work by the U-M team has demonstrated the electrode’s ability to capture signals from a rat’s brain. In a past study, carbon fiber electrodes dramatically outperformed conventional silicon electrodes with 34% of electrodes recording a neuron signal compared to 3%. Laser cutting then improved this number to 71% at 9 weeks after implantation. Flame sharpening has now enabled these high performance probes to be implanted directly into the cerebral cortex, negating the need for a temporary insertion aid, or shuttle, as well as into the rat’s cervical vagus nerve.

The brain, with its large, flat surface, is relatively easy to insert electrodes into. But U-M engineers have also taken on the more difficult task of inserting the sharpened carbon fiber electrodes into nerves—with diameters that can be as small as the thickness of several strands of hair. 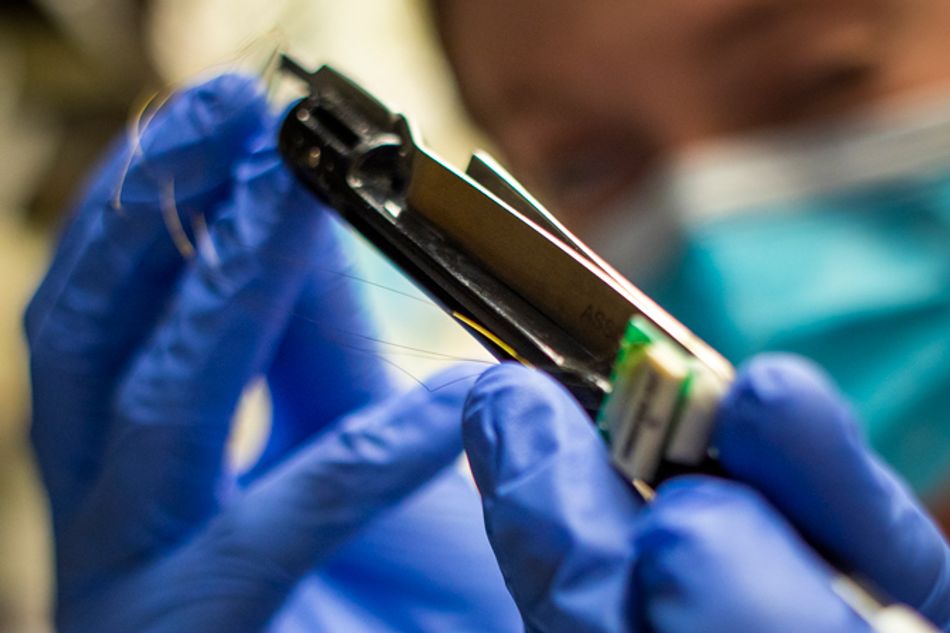 Those findings show that potential for U-M’s electrodes goes beyond prosthetic manipulation, according to Cindy Chestek, a U-M associate professor of biomedical engineering, and principal investigator of the The Cortical Neural Prosthetics Lab.

“Someone who is paralyzed may have no control over things like their bladder, for example,” Chestek said. “We may be able to utilize these smaller electrodes to stimulate and record signals from areas that can’t be reached by larger ones, maybe the neck or spinal cord, to help give patients some level of control.”

The research appears in the latest edition of IEEE Transactions on Neural Systems and Rehabilitation Engineering. The paper is titled: “Sharpened and Mechanically Durable Carbon Fiber Electrode Arrays for Neural Recording.”

A research project supported by the National Institutes of Health is seeking to create a cavopulmonary assist device (CPAD) to support patients with single-ventricle heart defects and potentially lead to improved quality and longevity of life.