A disordered network that is capable of detecting ordered patterns: it sounds contradictory, but it comes close to the way our brain works. Researchers of the University of Twente and the TU/e developed a brain-inspired network like this. A big step forward is that it is based on silicon technology and can be operated at room temperature. It makes use of material properties that electronic designers usually like to avoid. Thanks to ‘hopping conduction’, the system evolves to a solution without making use of pre-designed elements. The system could be useful in autonomous driving, for example, where many decisions have to be made based on recognition.The researchers published their work today in Nature.

Our brain is very powerful in recognizing patterns. Artificial Intelligence can do better in some cases, but this comes with a prize: it takes huge computing power whereas the brain only consumes 20 Watt. The semiconductor industry already starts embracing new computer design strategies that come closer to the way the brain works, like Intel’s Loihi processor that has neurons and synapses.

Still, mimicking one single neuron takes thousands of transistors – our brain has tens of billions of neurons. Miniaturization is still an answer to these large amounts, but this, too, reaches physical limits. The ‘disordered dopant atom network’, now presented in Nature is a fully different approach: it doesn’t use pre-designed neurons or other circuitry, but it makes use of material properties to evolve towards a solution. This highly counterintuitive approach proves to be energy efficient and doesn’t use much surface space.

‘Doping’ is the key word in this. In electronics, this is the well-known way of influencing the properties of transistors by deliberately introducing impurities in the silicon crystal. The concentration must be high enough to reach the desired effect. Using a much lower number of dopant atoms instead, boron in this case, results in a regime that circuit designers like to avoid.

And that’s exactly the regime in which the disordered network operates. Conduction now takes place via electrons hopping from one boron atom to another: ‘hopping conduction’ is, in a way, comparable to neurons seeking collaboration with other neurons to make a classification. As an example, the network is fed with 16 basic, four digit patterns. Each pattern results in a different output signal. With these 16 as a basis, it is possible to recognize a database with handwritten letters with high accuracy and speed, for example. The basic component is now 300 nanometer in diameter and consumes about 1 microWatt of power. 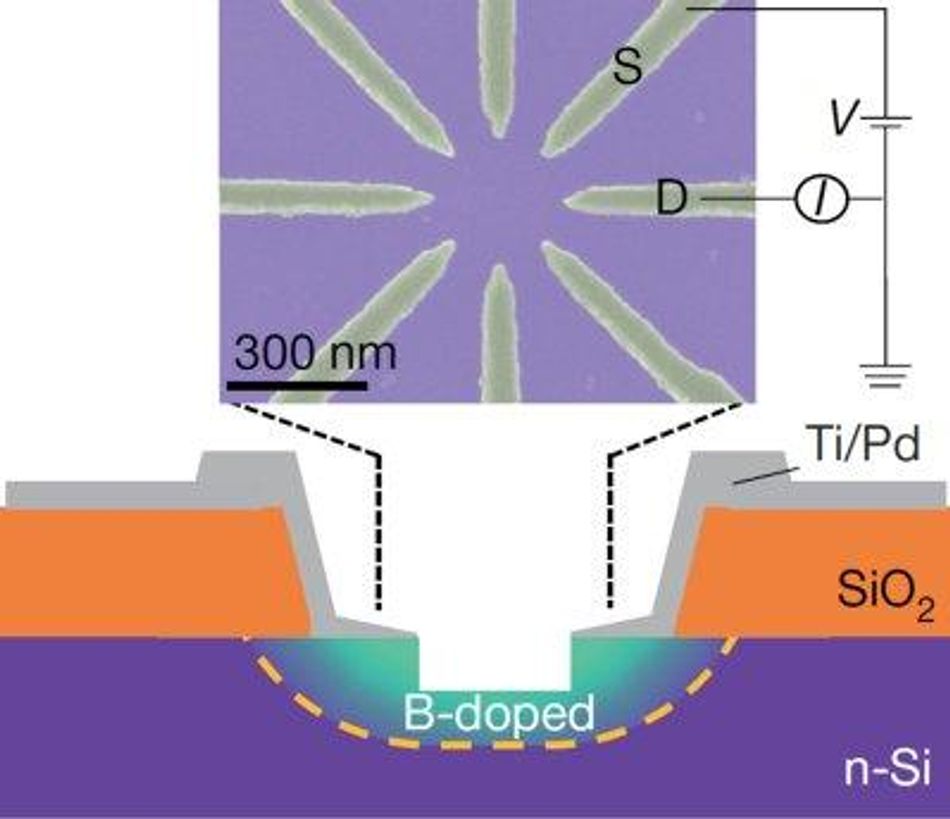 In future systems that use this type of networks, pattern recognition can be done locally, without using distant computing power. In autonomous driving, for example, many decisions have to be made based on recognition. This involves either a big onboard computer system or high-bandwidth communication with the cloud, probably even both. The new brain-inspired approach would involve less transport of data, so the car manufacturing industry is already interested in the new approach. This type of computing, called ‘edge computing’ can also be used for face detection, for example.

At the TU/e, the group Molecular Materials and Nanosystems and the Center for Computational Energy Research participated in the research. It was made possible through financial support of the Dutch Research Council NWO.

Machine learning (ML) is changing our lives. We can instantly translate from one language to another, search entire libraries in a matter of seconds, and even prevent credit card fraud.