Three recent papers from MIT CSAIL address how computers divide objects into sets of smaller elements, a procedure known as “meshing.” Zhang et al. produced a range of detailed 2D images without depending on unreliable methods that try to trace out features like curves and edges ahead of time. Image courtesy of MIT CSAIL.

New work on 2D and 3D meshing aims to address challenges with some of today’s state-of-the-art methods.

The digital age has spurred the rise of entire industries aimed at simulating our world and the objects in it. Simulation is what helps movies have realistic effects, automakers test cars virtually, and scientists analyze geophysical data.

To simulate physical systems in 3D, researchers often program computers to divide objects into sets of smaller elements, a procedure known as “meshing.” Most meshing approaches tile 2D objects with patterns of triangles or quadrilaterals (quads), and tile 3D objects with patterns of triangular pyramids (tetrahedra) or bent cubes (hexahedra, or “hexes”).

While much progress has been made in the fields of computational geometry and geometry processing, scientists surprisingly still don’t fully understand the math of stacking together cubes when they are allowed to bend or stretch a bit. Many questions remain about the patterns that can be formed by gluing cube-shaped elements together, which relates to an area of math called topology.

New work out of MIT’s Computer Science and Artificial Intelligence Laboratory (CSAIL) aims to explore several of these questions. Researchers have published a series of papers that address shortcomings of existing meshing tools by seeking out mathematical structure in the problem. In collaboration with scientists at the University of Bern and the University of Texas at Austin, their work shows how areas of math like algebraic geometry, topology, and differential geometry could improve physical simulations used in computer-aided design (CAD), architecture, gaming, and other sectors.

“Simulation tools that are being deployed ‘in the wild’ don’t always fail gracefully,” says MIT Associate Professor Justin Solomon, senior author on the three new meshing-related papers. “If one thing is wrong with the mesh, the simulation might not agree with real-world physics, and you might have to throw the whole thing out.”

In one paper, a team led by MIT undergraduate Zoë Marschner developed an algorithm to repair issues that can often trip up existing approaches for hex meshing, specifically.

For example, some meshes contain elements that are partially inside-out or that self-intersect in ways that can’t be detected from their outer surfaces. The team’s algorithm works in iterations to repair those meshes in a way that untangles any such inversions while remaining faithful to the original shape. 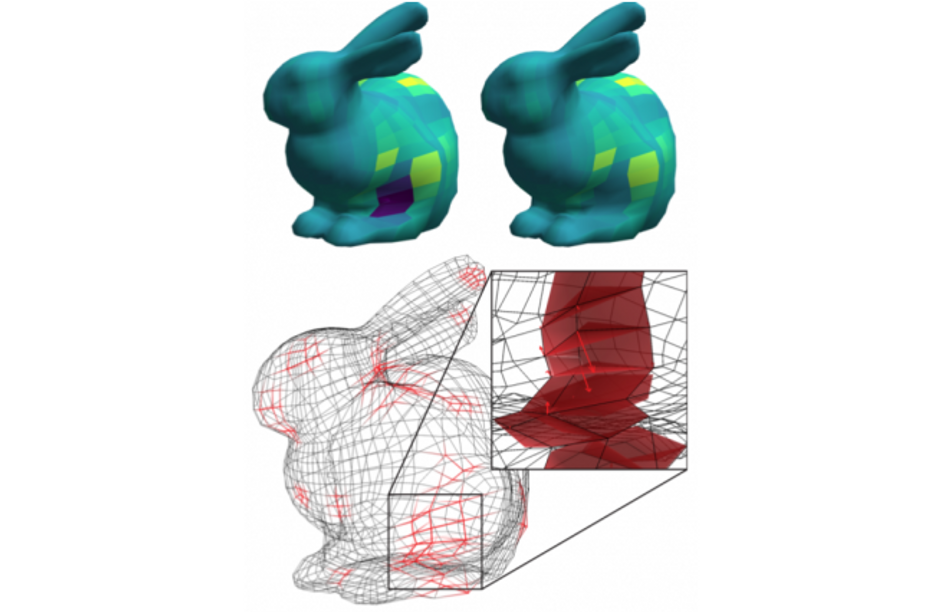 ﻿Marschner et al. analyzed existing meshes (top left) and ran them through a repair algorithm (top right). The bottom image highlights in bright red the points that moved more throughout the algorithm. The inset shows the most invalid section of the hex, with invalid elements highlighted in red and vectors representing the direction each vertex moved from the original mesh to the repaired mesh. Image courtesy of MIT CSAIL.

“Thorny unsolved topology problems show up all over the hex-meshing universe,” says Marschner. “Until we figure them out, our algorithms will often fail in subtle ways.”

Marschner’s algorithm uses a technique called “sum-of-squares (SOS) relaxation” to pinpoint exactly where hex elements are inverted (which researchers describe as being “invalid”). It then moves the vertices of the hex element so that the hex is valid at the point where it was previously most invalid. The algorithm repeats this procedure to repair the hex.

In addition to being published at this week’s Symposium on Geometry Processing, Marschner’s work earned her MIT’s 2020 Anna Pogosyants UROP Award.

It can be difficult for computers to find these features reliably, let alone incorporate them into meshes. By using an existing construction called an “octahedral frame field” that is traditionally used for meshing 3D volumes, Zhang and his team have been able to develop 2D surface meshes without depending on unreliable methods that try to trace out features ahead of time.

“As the goal of meshing is to simultaneously simplify the object and maintain accuracy to the original domain, this tool enables a new standard in feature-aligned quad meshing,” says Zhang. ﻿Palmer et al. showed that their designs tended to have simpler, more regular singular curves than existing methods, and were less likely to have artifacts like a degenerated head. Image courtesy of MIT CSAIL.

In physics and geometry, velocities and flows are represented as “vector fields,” which attach an arrow to every point in a region of space. In 3D, these fields can twist, knot around, and cross each other in remarkably complicated ways. Further complicating matters, Palmer’s research studies the structure of “frame fields,” in which more than one arrow appears at each point.

Palmer’s work gives new insight into the ways frames can be described and uses them to design methods for placing frames in 3D space. Building off of existing work, his methods produce smooth, stable fields that can guide the design of high-quality meshes.

Solomon says that his team aims to eventually characterize all the ways that octahedral frames twist and knot around each other to create structures in space.

“This is a cool area of computational geometry where theory has a real impact on the quality of simulation tools,” says Solomon.

“Existing software for automatic meshing often fails to produce a complete mesh, even if the frame field guidance ensures that the mesh pieces that are there look good,” Palmer says. “Our approach helps complete the picture.”

Digital Twins: a pathway to achieving the world's sustainability goals?

How Bodies Get Smarts: Simulating the Evolution of Embodied Intelligence

UW researchers have discovered a new law of fluid mechanics, a branch of physics, that will affect the future of aircraft design. The “Law of Incipient Separation” defines the maximum slope of an aircraft fuselage to avoid the separation of airflow that increases pressure-drag.

Digital Twins: a pathway to achieving the world's sustainability goals?

The transformative potential of Digital Twins could have a profound influence on how society addresses global sustainability challenges, but more inclusive, reliable and responsive computer simulations are needed to support these efforts, say researchers in a study published in Nature Sustainability

How Bodies Get Smarts: Simulating the Evolution of Embodied Intelligence

An in silico playground for creatures that learn, mutate, and evolve establishes the importance of morphological intelligence and suggests a new way to optimize embodied AIs.